David McAlister "Dave" Barry (born July 3, 1947) is a Pulitzer Prize winning American author and columnist, who wrote a nationally syndicated humor column for The Miami Herald from 1983 to 2005. He has also written numerous books of humor and parody, as well as comedic novels.

Barry was born in Armonk, New York, where his father, David, was a Presbyterian minister. He was educated at Wampus Elementary School, Harold C. Crittenden Junior High School (both in Armonk), and Pleasantville High School where he was elected "Class Clown" in 1965. He earned a Bachelor of Arts degree in English from Haverford College in 1969.[citation needed]

As an alumnus of a Quaker-affiliated college, he avoided military service during the Vietnam War by registering as a religious conscientious objector.[1] Notwithstanding his father's vocation, Dave decided "early on" that he was an atheist.[2] He said, "The problem with writing about religion is that you run the risk of offending sincerely religious people, and then they come after you with machetes."[2]

Dave Barry began his journalism career in 1971, working as a general assignment reporter for the Daily Local News in West Chester, Pennsylvania, near his alma mater, Haverford College. He covered local government and civic events and was promoted to City Editor after about two years. He also started writing a weekly humor column for the paper and began to develop his unique style. He remained at the newspaper through 1974. He then worked briefly as a copy editor at the Associated Press' Philadelphia bureau before joining Burger Associates, a consulting firm.[citation needed]

At Burger, he taught effective writing to business people. In his own words, he "spent nearly eight years trying to get various businesspersons to...stop writing things like 'Enclosed please find the enclosed enclosures,' but...eventually realized that it was hopeless."[3] 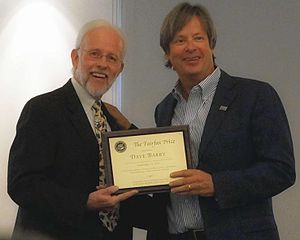 In 1981 he wrote a humorous guest column (about watching the birth of his son) in the Philadelphia Inquirer, which attracted the attention of Gene Weingarten, then an editor of the Miami Herald's Sunday magazine Tropic. Weingarten hired Barry as a humor columnist in 1983; Barry's column was syndicated nationally. Barry won a Pulitzer Prize for Commentary in 1988 "for his consistently effective use of humor as a device for presenting fresh insights into serious concerns."[4]

Barry's first novel, Big Trouble, was published in 1999. The book was adapted into a motion picture directed by Barry Sonnenfeld and starring Tim Allen, Rene Russo, and Patrick Warburton, with a cameo by Barry. The movie was originally due for release in September 2001 but was postponed following the September 11, 2001 attacks because the story involved smuggling a nuclear weapon onto an airplane. The film was released in April 2002.

In response to a column in which Barry mocked the cities of Grand Forks, North Dakota and East Grand Forks, Minnesota for calling themselves the "Grand Cities", Grand Forks named a sewage pumping station after Barry in January 2002. Barry traveled to Grand Forks for the dedication ceremony.[5]

Articles written by Barry have appeared in publications such as Boating, Home Office Computing, and Reader's Digest, in addition to the Chicken Soup for the Soul inspirational book series. Two of his articles have been included in the Best American Sportswriting series. One of his columns was used as the introduction to the book Pirattitude!: So You Wanna Be a Pirate? Here's How! (ISBN 0-451-21649-0), a follow-up to Barry's role in publicizing International Talk Like a Pirate Day. His books have frequently appeared on the New York Times Best Seller List.

On October 31, 2004, Dave Barry announced that he would be taking an indefinite leave of absence of at least a year from his weekly column in order to spend more time with his family. In December 2005, Barry said in an interview with Editor and Publisher that he would not resume his weekly column, although he would continue such features as his yearly gift guide, his year-in-review feature, and his blog, as well as an occasional article or column.

On Sunday, September 22, 2013, the opening night of the 15th annual Fall for the Book festival in Fairfax, Virginia, Barry was awarded the event's highest honor, the Fairfax Prize[6] honoring outstanding literary achievement and presented by the Fairfax Library Foundation.

From 1993 to 1997, CBS broadcast the sitcom Dave's World based on the books Dave Barry Turns 40 and Dave Barry's Greatest Hits. The show starred Harry Anderson as Barry and DeLane Matthews as his wife Beth. In an early episode, Barry appeared in a cameo role. After four seasons, the program was canceled shortly after being moved from Monday to the "Friday night death slot".[citation needed]

During college, Barry was in a band called the Federal Duck. While at the Miami Herald, he and several of his colleagues created a band called the Urban Professionals; with Barry on lead guitar and vocals, they performed an original song called "The Tupperware Song" at the Tupperware headquarters in Orlando, Florida.[7]

Beginning in 1992, Barry played lead guitar in the Rock Bottom Remainders, a rock band made up of published authors. (Remainder is a publishing term for a book that doesn't sell.) The band was founded by Barry's sister-in-law Kathi Kamen Goldmark for an American Booksellers Association convention, and has also included Stephen King, Amy Tan, Ridley Pearson, Scott Turow, Mitch Albom, Roy Blount, Jr., Barbara Kingsolver, Matt Groening, and Barry’s brother Sam, among others.[8][9] The band's members "are not musically skilled, but they are extremely loud," according to Barry. Several high-profile musicians, including Al Kooper, Warren Zevon, and Roger McGuinn, have performed with the band, and Bruce Springsteen sat in at least once. The band's road tour resulted in the book Mid-Life Confidential: The Rock Bottom Remainders Tour America with Three Chords and an Attitude. The Rock Bottom Remainders disbanded in 2012 following Goldmark's death from breast cancer.

Beginning in 1984, Barry and Tropic editors Gene Weingarten and Tom Shroder have organized the Tropic Hunt (now the Herald Hunt), an annual puzzlehunt in Miami. A Washington, D.C., spinoff, the Post Hunt, began in 2008.[citation needed]

Barry has run several mock campaigns for President of the United States, running on a libertarian platform. He has also written for the Libertarian Party's national newsletter.[10]

The screen adaptation of Barry's book Dave Barry's Complete Guide to Guys was released in 2005; it premiered at several film festivals and is available on DVD.[citation needed]

Barry has defined a sense of humor as "a measurement of the extent to which we realize that we are trapped in a world almost totally devoid of reason. Laughter is how we express the anxiety we feel at this knowledge."[11]

When distinguishing fact from hyperbole, Barry frequently asserts: "I am not making this up." Among his favorite topics are exploding or flaming items (cows, whales, vacuum cleaners, toilets, Pop-Tarts, Barbie dolls, etc.), dogs lacking intelligence, live blogging the television series 24, and amusing government studies. He labels various posts on his blog with long acronyms, such as WBAGNFARB ("would be a good name for a rock band"), poking fun at long internet abbreviations.[citation needed]

He also enjoys making fun of South Florida, where he resides. In Dave Barry Hits Below the Beltway, he suggested that many of America's problems could be solved if South Florida were literally sawed off from the mainland and disowned by the United States. He has also made fun of the region in Homes and Other Black Holes as well as other books. Even his novels Big Trouble and Tricky Business capitalize heavily in the absurdities that exist only in South Florida. In Big Trouble, for example, the ridiculous nuances of South Florida are expressed through the experiences of the two hit men, Henry and Leonard. They experience an irritating sports talk show host, a highly incompetent airport security detail, and an attack by a python by the name of Daphne in the same airport before deciding that they never want to return to Florida again. Barry also uses Big Trouble to poke fun at the existence of a Russian arms black market, the corrupt political system (Puggy makes a living off being paid to vote), and the incredibly loose labor laws in the region.[citation needed]

The phrase "would be a good name for a rock band" is an observation Barry often applies to phrases that pop up in his writing, such as "The Moos of Derision",[12] "Decomposing Tubers"[13] and "Hearty Polyp Chuckles".[14] In keeping with this, Barry's website contains a fairly sizable list of phrases that he claims would be good names for a rock band.[15]

In his humor books, Barry often cites a humorous phrase or image, which he then mercilessly repeats throughout. Notable examples include the Hawley-Smoot Tariff in Dave Barry Slept Here: A Sort of History of the United States, Buffalo Bob in Dave Barry Turns 50, and giant prehistoric zucchini in Dave Barry Hits Below the Beltway, e.g., "Growth of U.S. government according to Alan Greenspan=giant prehistoric zucchini." He continues to reference these things, occasionally with fake subtlety, e.g., "The H*****-S**** T*****".[citation needed]

His novels typically feature numerous initially unrelated subplots, many related to criminal activity, which slowly intertwine over the course of the story. Many critics explicitly compare this style to that of Elmore Leonard, though with a more comedic tone.[16]

Barry married his second wife, Beth Lenox, in 1976. Barry and Lenox worked together at the Daily Local News, where they began their journalism careers on the same day in September 1971; they had one child, Robert. Barry and Lenox divorced in 1993. In 1996, Barry married Miami Herald sportswriter Michelle Kaufman;[17] they had a daughter, Sophie, in 2000. Barry has had dogs named Earnest, Zippy, and now Lucy. All have been mentioned regularly in Barry's columns.[citation needed]