From Infogalactic: the planetary knowledge core
Jump to: navigation, search
For others of the same name and profession, see David Edwards (disambiguation).

David Alexander Edwards (born 3 February 1986) is an English-born Wales international footballer who plays as a midfielder for Wolverhampton Wanderers. He is known for his energetic runs and work rate.

Edwards began his career at hometown club Shrewsbury Town before a short stay at Luton Town, brought his to the attention of Wolverhampton Wanderers, for whom he signed in January 2008. With Wolves he has played in three different divisions, including the Premier League.

A full international since 2007, Edwards has earned over 25 caps for Wales.

Born in Shrewsbury, Edwards started as an apprentice at his hometown club, Shrewsbury Town[2] and made his debut on the final match of 2002–03 season, coming on as a substitute in a 2–1 defeat at home to Scunthorpe United on 3 May as the Shrews were relegated from The Football League.

He did not play a large role in Shrewsbury's promotion-winning campaign from the Football Conference, but did enjoy a run of games in the second half of the season. Upon the club's return to the Football League, he became first choice, a role he retained for three successive seasons at Gay Meadow. Towards the end of the 2006–07 season, Edwards was the subject of transfer speculation, after rejecting an offered extension to his Shrewsbury contract. He was then controversially left out of the play-off final against Bristol Rovers by then-manager Gary Peters despite playing an important role in their run to the final.[3] The Shrews went on to lose 3–1 and missed out on promotion to League One.[4]

On 26 June 2007, Edwards signed for Luton Town on a three-year deal. As he was under 24, Shrewsbury commanded a compensation fee to cover his youth development. The eventual fee was agreed at a tribunal, but clubs reported differing figures; Luton claiming it was £250,000,[5] with Shrewsbury reporting £250,000 as the initial payment, plus a further £150,000 based on appearances.[6][7]

Edwards made 19 league appearances for Luton Town in League One. However, the club was struggling financially and were only able to pay their players' weekly wages twice in three months, hence a 10-point deduction.[8] He became linked with Championship sides Watford and Nottingham Forest after some good performances in the FA Cup tie against Liverpool. Luton accepted a £675,000 offer from Wolverhampton Wanderers. On 16 January, he signed a two and a half year deal.[9][10] 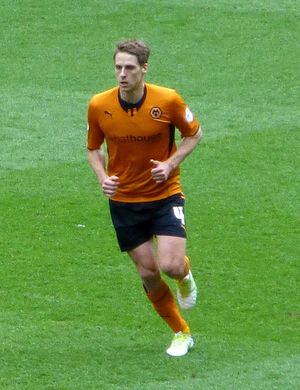 Two days after signing, Edwards made a goalscoring debut for Wolves on 18 January, in a 2–0 win at Scunthorpe United, the club he had faced in his Shrewsbury debut.[11] However, injuries kept him from playing a regular role in the remainder of the season. He returned fit for the following season, but found new signing David Jones often preferred alongside captain Karl Henry in central midfield; however, Edwards still started half the season's games as they won promotion to the Premier League.

The midfielder became a regular in the team after promotion, and contributed the winning goal against Fulham in the first home win of the season on 20 September 2009.[12] He suffered ankle ligament damage that December which kept him out for four months,[13] but he recovered to make a handful of appearances in the closing months as the club retained their top-flight survival. Edwards' contribution to Wolves in the 2010–11 season was severely hampered by injuries. He did however, make 12 appearances, scoring once, in a 2–1 victory against Manchester City, where he scored past his former Shrewsbury team-mate, and lodger, Joe Hart.[14]

Edwards suffered two injury setbacks during the 2012–13 season, when he firstly tore his hamstring in December 2012 a match away at Bristol City,[15] and then, after returning to first team action, suffered a broken foot in the reverse fixture.[16] Edwards remained with the club after they suffered a second consecutive relegation, scoring nine goals as the team won promotion back to the Championship at the first attempt as League One champions. On 13 June 2014, he signed a new two-year contract.[17]

On 8 August 2015, he scored the winning goal in Wolves' first game of the season away to Blackburn Rovers, finishing Nouha Dicko's cross with his hand. Manager Kenny Jackett said after the game that the goal was scored by Edwards' hand, albeit not deliberately.[18] Five days later, he signed a one-year contract extension to last until 2017.[19]

Ewards had previously played for the Wales U17 and U19 teams making his U21 debut against Cyprus on 16 May 2006. He had been selected for the under-21 squad for an earlier friendly against Northern Ireland on 28 February 2006, but missed the match through injury.

His first experiences with the senior team were under John Toshack in 2007, remaining an unused substitute against Slovakia and withdrawing from games against San Marino and Cyprus with a hamstring injury.[20] He made his full international debut on 17 November 2007 against the Republic of Ireland at the Millennium Stadium as a 37th-minute substitute for Carl Robinson in a 2–2 Euro 2008 qualifier.[21]

On 10 October 2008, Edwards scored the opening goal in a 2010 World Cup qualifier against Liechtenstein, and against Azerbaijan on 6 June 2009.[22] He ended the campaign with two goals. Following Wales' disappointing qualifying campaign, he was called up again for 14 November 2009 friendly against Scotland, a 3–0 win, and opened the scoring with a close-range finish from Aaron Ramsey's assist.[23]