David John Eicher (born August 7, 1961) is an American editor, writer, and popularizer of astronomy and space. He has been editor-in-chief of Astronomy magazine since 2002. He is author, coauthor, or editor of 21 books on science and American history and is known for having founded a magazine on astronomical observing, Deep Sky Monthly, when he was a 15-year-old high school student.[1]

Eicher is also a historian, having researched and written extensively about the American Civil War. 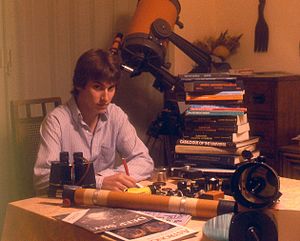 Eicher was born in Oxford, Ohio on August 7, 1961. He was born into a scientific family, the son of John Harold Eicher (born 1921), a professor of organic chemistry at Miami University in Oxford, Ohio, who as a young man was a Manhattan Project scientist, and housewife Susan Ann (née Arne) Eicher (1923–1983). His sister Nancy Eicher (born 1959) is a journalist and editor. His great uncle was Ethan Nathan Allen (1904–1993), a professional baseball player and baseball coach at Yale University whose players included George H. W. Bush. His great-great grandfather Darius Wetzel (1839–1903) fought with the 74th Ohio Infantry in the Civil War, which influenced Eicher more than a century later. He is of predominantly German ancestry, with significant Swiss, English, and a very small amount of Delaware Native American ancestry in his bloodline.

Eicher grew up in a suburb of the small town of Oxford, with relatively dark skies overhead. He attended William Holmes McGuffey Laboratory School (a school for offspring of Miami University employees) and Talawanda High School, where he was involved in band activities. He was also actively interested in American history and in science, leaning toward a career as a doctor.

This changed in early 1976 when he attended a “star party” in Oxford and Eicher looked at Saturn through a telescope. He was immediately attracted to astronomy and set off exploring the sky with binoculars, joining the local astronomy club, and beginning to write for their publication when another contributor quit. Eicher had significant enthusiasm for writing about star clusters, nebulae, and galaxies — objects in deep space beyond the solar system — and by June 1977 commenced publishing Deep Sky Monthly, a journal for similar observers. Deep Sky Monthly caught on and soon had a circulation of several hundred copies among astronomy enthusiasts. By the time Eicher started attending Miami University in Oxford, focusing on physics, he continued producing the magazine, which had gone to a commercial printer with slick paper and offset photo printing, reaching a circulation of 1,000.[2]

In the fall of 1982 Eicher left his schooling after three years of college when Richard Berry, then editor of Astronomy, offered him a position as assistant editor and a continuance of Eicher’s magazine, now retitled Deep Sky and to be published quarterly.

Eicher began his career at AstroMedia Corp., the magazine’s publisher, in September 1982 as assistant editor of Astronomy and editor of Deep Sky. Eicher wrote many stories about observing deep-sky objects, comets, and other sky targets, and was the publication’s photo editor. Deep Sky started fast and quickly became influential in spreading the word about the ease of observing many previously little-known sky objects, growing to a circulation of 15,000 over the coming few years.

In 1985 Kalmbach Publishing Co., the Milwaukee publisher of Model Railroader, Trains, and other titles, bought AstroMedia Corp. and the Astronomy staff moved across town. Eicher’s role in the magazine deepened as he worked on many science stories as well as observing pieces and by decade’s end, the company moved to Waukesha, Wisconsin, 16 miles west of Milwaukee, and by that time Eicher was promoted to associate editor.[3] He also published his first books, The Universe from Your Backyard (a compilation of deep-sky observing stories first published in Astronomy), and Deep-Sky Observing with Small Telescopes, an anthology about clusters, nebulae, and galaxies written by a variety of contributors. In 1992 the company decided to cease publishing Deep Sky. In 2002 Eicher became Astronomy magazine’s sixth editor in chief.[4] 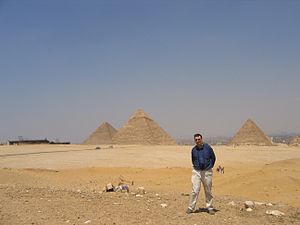 David Eicher at the Giza Pyramids, Egypt, at the time of the transit of Venus, June 2004.

Eicher frequently travels to speak on astronomy or view solar eclipses with tour groups to such places as Australia, Austria, Belgium, Canada, the Canary Islands, China, the Czech Republic, Ecuador, Egypt, England, the Faroe Islands, France, the Galapagos Islands, Germany, Greece, Iceland, Ireland, Italy, Kenya, Mexico, the Netherlands, Norway, Poland, Russia, Spain, Tunisia, and Turkey. In 2013 he was invited to speak about great advances in astronomy and on comets at Harvard University, in the Phillips Auditorium of Harvard College Observatory. He was among the 2014 speakers at the Starmus Festival in Tenerife, Canary Islands,[6] and will again speak at Harvard in the spring of 2016. 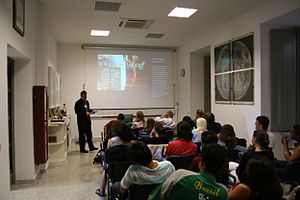 Eicher is active promoting astronomy outreach to a younger generation. Since 2011, he has been president of the Astronomy Foundation (originally titled the Astronomy Outreach Foundation),[7] the first ever trade association for the telescope industry. The group had its beginnings when Joseph Lupica, then CEO of the telescope manufacturer Celestron, proposed such an industry group, and others such as Vic Maris of Stellarvue Telescopes and Rick Hedrick of PlaneWave Instruments joined in with the effort. The Foundation received 501c3 nonprofit status in 2014 and now has a board consisting of Eicher, Lupica, Maris, Hedrick, and others, and plans astronomy outreach activities beginning in 2015. 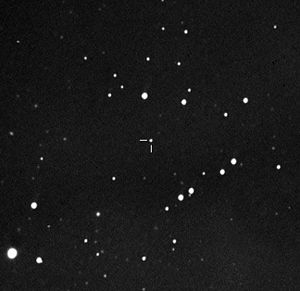 Asteroid 3617 Eicher (tick marks) imaged by Canadian astrophotographer Jack Newton on July 5, 2005, using a robotic telescope placed in Portal, Arizona. At this time the asteroid shone at magnitude 16.7 and was just south of the Virgo Cluster of galaxies. Photo credit: Jack Newton

Eicher’s service to the astronomy world was recognized in 1990 when the International Astronomical Union named minor planet 3617 Eicher (discovery designation 1984 LJ) in his honor. The asteroid, a main belt object in orbit between Mars and Jupiter, was discovered by astronomer Brian A. Skiff at Lowell Observatory’s Anderson Mesa Station in 1984 and the citation was proposed and written by astronomer David H. Levy.

In 2013, in anticipation of the approach of Comet ISON (C/2012 S1), Eicher produced a popular book about the science, history, and observation of comets, COMETS! Visitors from Deep Space (Cambridge University Press).[8]

In 2014 Eicher helped to produce a book with Brian May, guitarist and singer from the rock group Queen, and astronomer Garik Israelian, constituting the conference proceedings, lectures, and information from the first Starmus Festival, a science and music event held in 2011 in the Canary Islands.

Eicher has also produced a major book on astrophysics, planetary science, and cosmology, for Cambridge University Press, published in November 2015. The book is The New Cosmos: Answering Astronomy’s Big Questions.[10]

In early 2015 he joined the Asteroid Day movement as a 100x signatory and also serves on that project’s board as Editor-in-Chief. [11] 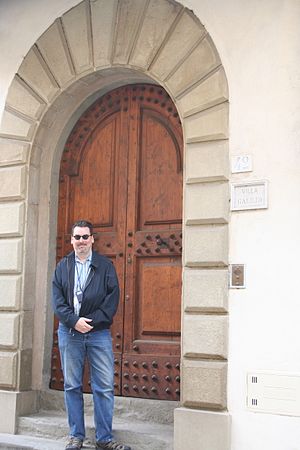 In May 2015 Eicher was named to the Board of Directors of the Starmus Festival, joining fellow board members Garik Israelian, Stephen Hawking, Brian May, Peter Gabriel, Alexei Leonov, Richard Dawkins, Jack Szostak, Jill Tarter, and Robert Williams.

In 2016 Eicher edited, along with Garik Israelian and Brian May, the second book of Starmus Festival talks, Starmus: Discovering the Universe, which contains talks from the 2014 Starmus Festival, by Stephen Hawking, Alexei Leonov, Brian May, Mark Boslough, Eicher, Walt Cunningham, John Mather, John Ellis, and others.

Also in 2016, Eicher commenced working on a major book on galaxies, having long been inspired by the 1980 book “Galaxies” by Timothy Ferris.

He has also been active in promoting Civil War remembrance and education and was appointed by Wisconsin Governor James Doyle to serve on the state’s Abraham Lincoln Bicentennial Commission in 2009.

In 2013 Eicher donated his Civil War library of more than 4,000 volumes, collected since 1982, to the Ulysses S. Grant Presidential Library and Ulysses S. Grant Association at Mississippi State University.

Eicher lives near Big Bend, Wisconsin, with his wife, Lynda Ann Tortomasi Eicher (born 1961). His son, Christopher David Eicher (born December 18, 1992), is a student at the University of Wisconsin–Milwaukee. He is an enthusiastic fan of the Green Bay Packers.[16] 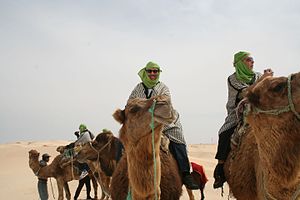 David Eicher riding a camel through the Sahara Desert in Tunisia, 2011.