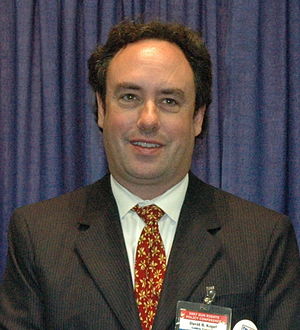 He is currently Research Director of the Independence Institute in Golden, Colorado, Associate Policy Analyst at the Cato Institute, contributor to the National Review magazine and Volokh Conspiracy legal blog. Previously he was Adjunct Professor of Law, New York University, and Former Assistant Attorney General for Colorado.

Politically he is a lifelong registered Democrat but a confessed small government libertarian at heart who voted for Ralph Nader.[3]

In 1996 he and former Illinois senator Paul Simon wrote an article published in the National Law Journal criticizing the practice of mandatory minimum sentence.[4]

Kopel opposes gun control and is a benefactor member of the National Rifle Association. His articles on gun control and gun violence have been cited in the Opposing Viewpoints Series.[5] In 2003, Kopel wrote in National Review "Simply put, if not for gun control, Hitler would not have been able to murder 21 million people.[6]" He recently contributed an article to the 59th Volume of the Syracuse Law Review entitled "The Natural Right of Self-Defense: Heller's Lesson for the World."[7] He is a critic of Michael Moore and provided a list of what he characterized as Moore's "deceits".[8][9] He appeared in FahrenHYPE 9/11, a film that disputes the allegations in Fahrenheit 9/11. Kopel's Independence Institute received 1.42 million dollars of funding for its activities by the National Rifle Association.[10][11]

Kopel is also a life member of the Academy of Criminal Justice Sciences,[12] and, as of 2010, served on the Board of Directors of the Colorado Union of Taxpayers.[13]

Kopel is the lead attorney in a May 2013 Federal civil rights lawsuit against the State of Colorado aimed at blocking several "Democratic gun control measures passed by the state legislature and signed into law by Gov. John Hickenlooper" in March 2013.[14]