This article discusses those who apply deconstruction, a method developed by French philosopher Jacques Derrida, to religion. 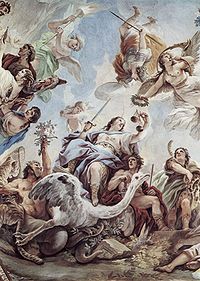 The law is made up of necessary human constructions while justice is the undeconstructible call to make laws. The law belongs to the realm of the present, possible, and calculable, while justice belongs to the realm of the absent, impossible, and incalculable. Deconstruction bridges the gap between the law and justice as the experience of applying the law in a just manner. Justice demands that a singular occurrence be responded to with a new, uniquely tailored application of the law. Thus, a deconstructive reading of the law is a leap from calculability towards incalculability.

In deconstruction, justice takes on the structure of a promise that absence and impossibility can be made present and possible. Insofar as deconstruction is motivated by such a promise, it escapes the traditional presence/absence binary because a promise is neither present nor absent. Therefore, a deconstructive reading will never definitively achieve justice. Justice is always deferred.

Derrida works out his idea of justice in Specters of Marx and in his essay "Force of Law" in Acts of Religion; he works out his idea of hospitality in Of Hospitality; Similarly for democracy see Rogues: Two Essays on Reason; friendship see The Politics of Friendship; the other see The Gift of Death; the future see Given Time: I. Counterfeit Money.

Deconstruction-and-religion understands religion in terms of what is shared among the Abrahamic faiths. In Derrida's work, there is a suggestive notion of a quasi-religion locatable in the cluster of concepts surrounding the affirmation of that which is experienced as undeconstructible. Derrida's acts of affirmation go by names such as the "unconditional without sovereignty," the "weak force" of the undeconstructible, and the "possibility of the impossible." Derrida sometimes suggested that such acts of affirmation can be used to describe "God."[citation needed]

Derrida in the middle-phase of his career re-visits negative theology in his Comment ne pas parler - Dénégations (1987; How to Avoid Speaking - Denials (1989)). Robert Magliola explains at length[4] the several ways—most of them adapted from Talmudic tactics—that Dénégations uses to disrupt or "confound" possible structural solidarity with negative theology (Derrida was a Sephardi Jew very appreciative of his ancestry). Via many examples from Derrida's text, Magliola demonstrates how these Derridean tactics work. A partial list of these tactics: (1) ambiguous narrative modes, voices, and citations, so the voice of any utterance may conceal another that it may or may not be quoting; (2) subversive footnotes that destabilize rather than reinforce the text's body; (3) double binds, so assertions in parts of the essay are designed to contradict other parts; (4) aberrant reinscription, so double binds proliferate in the text, implying a symploké (GK-"crossing") that precedes the binds themselves: thus Derrida's often-cited différance originaire is itself a double bind; (5) Trace-words such as sceau, filtre, prétend, etc., that neither mean nor do not mean what they meant in his earlier oeuvres.

Différance is not God

Central to deconstruction is the idea of différance. Différance is an anarchic nonconcept that makes a conception of language-as-a-play-of-signifiers possible. This French neologism means both "differing" and "deferring," describing in its name its own operation in setting deconstructive language in motion.

In the essay "Sauf le Nom," Derrida centered his investigation of the notion of God around negative theology and the poetry of Angelus Silesius.[7] 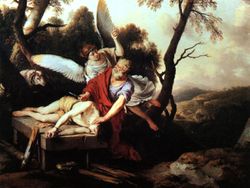 Deconstruction-and-religion operates passively when it takes a historical, descriptive approach to analyzing the corpora of various traditions of theology. In its passive mode, deconstruction-and-religion examines theological traditions to take note of documented instances of reified or unnatural theological concepts expanding only to later be dismissed or significantly transformed. An example of an unnatural concept rising and falling is the medieval Christian understanding of indulgences. The historical deterioration or mutation of theological concepts is referred to as "self-deconstruction" by Jean-Luc Nancy. The idea of self-deconstruction echoes Friedrich Nietzsche's idea that the highest Western values devalue themselves.

John D. Caputo has a distinctive approach to deconstruction-and-religion that he calls "weak theology". According to Caputo, the distinctive reinterpretive act of weak theology has resulted in the notion of the "weakness of God". The paradigm of God as an overwhelming physical or metaphysical force is regarded as mistaken. The old God-of-power is displaced with the idea of God as an unconditional claim without force. As a claim without force, the God of weak theology does not physically or metaphysically intervene in nature.

Essentially, the idea of God in Caputo's thought is an alternate name for particular manifestations of undeconstructibility. The idea of God as an undeconstructible follows a line of ethical thinking that moves from Martin Buber to Emmanuel Levinas to Jacques Derrida. Caputo works the idea out in the following way:

On the classical account of strong theology, Jesus was just holding back his divine power in order to let his human nature suffer. He freely chose to check his power because the Father had a plan to redeem the world with his blood. ... That is not the weakness of God that I am here defending. God, the event harbored by the name of God, is present at the crucifixion, as the power of the powerlessness of Jesus, in and as the protest against the injustice that rises up from the cross, in and as the words of forgiveness, not a deferred power that will be visited upon one’s enemies at a later time. God is in attendance as the weak force of the call that cries out from Calvary and calls across the epochs, that cries out from every corpse created by every cruel and unjust power. The logos of the cross is a call to renounce violence, not to conceal and defer it and then, in a stunning act that takes the enemy by surprise, to lay them low with real power, which shows the enemy who really has the power. That is just what Nietzsche was criticizing under the name of ressentiment.

— John D. Caputo, The Weakness of God: A Theology of the Event[8]

Following Derrida's criticisms of the metaphysics of presence and logocentrism, Jean-Luc Nancy understands Christianity to be act-based and focused on an undeconstructible understanding of hope. Nancy thinks of Christianity as the "religion that provided the exit from religion," and posits that it consists in the announcement of the second coming of Christ, known as parousia. For Nancy, because Christ is central to the formation of value and meaning in Christianity; because parousia is an announcement of a Christ to come; and because the promised return of Christ involves the return of a person who lived in the past, then Christianity as a framework of thought supports the notion that 'traces' of the non-present (i.e. past and future) are constitutive of the present. As a result, the Christian concept of parousia poses ontological questions about the conditions of possibility of concepts like identity, subjectivity, consciousness, and experience, among many others. In Nancy's thought, the concept of parousia reveals that we humans are no longer mortals who are saved by faith in an immortal being. Rather, the concept reveals that we are beings who are capable of accepting or rejecting non-self-presence. The acceptance of non-self-presence is what Nancy understands to be the heart of Christian 'faith.'

[F]aith, in any case, is not about compliance without proof or the leap above proof. It is the act of the faithful person, an act which, as such, is the attestation of an intimate consciousness of the fact that it exposes itself and allows itself to be exposed to the absence of attestation, to the absence of parousia. ... Christian faith is distinguished precisely and absolutely from all belief.

Bernard Stiegler on the prosthesis of faith

The French philosopher Bernard Stiegler, following the archaeologist André Leroi-Gourhan, understands the human distinction to consist in a third kind of memory: in addition to the genetic memory recorded in the DNA molecule, and individual nervous system memory, human beings are the creatures capable of using organized, inorganic matter, that is, tools, technology, writing, and everything that records a human gesture (as Stiegler puts it: "humans die but their histories remain").[10] Stiegler calls this tertiary memory, and it is the beginning of the human possibility for the individual to adopt a past they did not themselves live (when, for example, an immigrant to the United States adopts George Washington as part of his or her past). In his article, "Derrida and technology: fidelity at the limits of deconstruction and the prosthesis of faith," Stiegler uses this concept of tertiary memory to conduct a reading of the Derridian corpus. In so doing he reaches the following conclusion:

An intelligence of faith—which is impossible, which we can do nothing but promise, which we have to promise in its very default—must/fails to account each time for the conditions in which faith yields to the trust that we have or do not have in tertiary memory. No politics of memory or of the archive, of hospitality or of home, no future is, perhaps, promised outside this "must/failure" of life that the dead haunts in life's technicity. The tertiary trace refers to the arche-trace, older than any empiricial or meta-empirical trace; it refers always to the absolute past. But the absolute past only constitutes itself "as such" through this referral. It is why a logic of the supplement, without ever simply being such a history, must also be a history of the supplement in its epochs, epochs that are each time singular and must each time form the object of a technical history constantly renewed. Faith and tele-technology are for this reason mutually insoluble and mutually inseparable—transductively (re)constituted by each other. It is why, finally, fidelity is always at the limits of deconstruction qua undeconstructible justice. Such would be faith: at the limits of deconstruction. Such would be faith at the limits of deconstruction.

— Bernard Stiegler, "Derrida and technology: fidelity at the limits of deconstruction and the prosthesis of faith"[11]