Descent from Genghis Khan (Mongolian: Алтан ураг Altan urag, meaning "Golden lineage"; Kazakh : Töre), generally called Genghisids, is traceable primarily in Central Asia; Mongolia, Inner Mongolia in China, Siberia and Koreas.[citation needed] His four sons and other immediate descendants are famous by names and by deeds. Later Asian potentates attempted to claim descent from the House of Borjigin even on flimsy grounds, such as was considered Mongol matrilineal descent. In the 14th century, valid sources (heavily dependent on Rashid al-Din and other Muslim historians) all but dried up. With the recent popularity of genealogical DNA testing, a larger and broader circle of people started to claim descent from Genghis Khan.

Jochi, Genghis Khan's eldest son, had many more recorded progeny than his brothers Ögedei, Chagatai, and Tolui—but there is some doubt over his paternity. According to the The Secret History of the Mongols, the boy was sent to Genghis by Chilger, who had kidnapped his first wife Börte, keeping her in captivity for about a year. In one passage, Chagatai refers to Jochi as "bastard" (although the true meaning of the Mongol term is obscure). To this, Genghis Khan responds: "How dare you talk about Jochi like this? Is not he the eldest of my heirs? That I never heard such wicked words again!" (255). All in all, Genghis Khan pronounces the words "Jochi is my eldest son" thrice (210, 242, 254).

Modern historians speculate that Jochi's disputed paternity was the reason for his eventual estrangement from his father and for the fact that his descendants never succeeded to the imperial throne. On the other hand, Genghis always treated Jochi as his first son, while the failure of the Jochid succession may be explained by Jochi's premature death (which may have excluded his progeny from succession).

Another important consideration is that Genghis' descendants intermarried frequently. For instance, the Jochids took wives from the Ilkhan dynasty of Persia, whose progenitor was Hulagu Khan. As a consequence, it is likely that many Jochids had other sons of Genghis Khan among their maternal ancestors.

Among the Asian dynasties descended from Genghis Khan were the Yuan Dynasty of China, the Ilkhanids of Persia, the Jochids of the Golden Horde, the Shaybanids of Siberia, and the Astrakhanids of Central Asia. As a rule, the Genghisid descent was crucial in Tatar politics. For instance, Mamai had to exercise his authority through a succession of puppet khans but could not assume the title of khan himself because he was not of the Genghisid lineage.

Timur Lenk, the founder of the Timurid Dynasty, claimed to be a descendant from Genghis Khan; however, this conclusion is based on false ground. There is no clear evidence for his own descent; he associated himself with the family of Chagatai Khan through marriage. He also never assumed the title "Khan" for himself, but employed two members of the Chagatai clan as formal heads of state. The Mughal royal family of the Indian subcontinent descended from Timur through Babur and also from Genghis Khan (through his son Chagatai Khan).

The ruling Wang Clan of the Korean Goryeo Dynasty became descendants of the Genghisids through the marriage between King Chungnyeol and a daughter of Kublai Khan. All subsequent rulers of Korea for next 80 years, until King Gongmin, also married Borijit Princesses. But since all Mongol injects were females, no Y-haplotype entered Korean Royal and noble families during this period, only matrilinear mtDNA.

At a later period, Tatar potentates of Genghisid stock included the khans of Qazan and Qasim (notably a Russian tsar, Simeon Bekbulatovich) and the Giray dynasty, which ruled the Khanate of Crimea until 1783.[1]

As the Russian Empire annexed Turkic polities, their Genghisid rulers frequently entered the Russian service. For instance, Kuchum's descendants became Russified as the Tsarevichs of Siberia. Descendants of Ablai Khan assumed in Russia the name of Princes Valikhanov. All these families asserted their Genghisid lineage. The only extant family of this group is the House of Giray, whose members left Soviet Russia for the United States and United Kingdom. Even more a Russian tsar Simeon Bekbulatovich as a grandson of Ahmed Khan bin Küchük was a descendant of Genghis Khan.

The Qing completely exterminated one branch (Ligdan Khan's descendants) of the Borjigids after an anti-Qing revolt in 1675 by Ejei Khan's brother Abunai and Abunai's son Borni against the Qing.[2] The Qing Emperors then placed the Chahar Mongols under their direct rule.

After the Mongol invasion of Russia, the Rurikid rulers of Russian principalities were eager to obtain political advantages for themselves and their countries by marrying into the House of Genghis. Alexander Nevsky was adopted by Batu Khan as his son.[citation needed] Alexander's grandson Yury of Moscow married a sister of Uzbeg Khan; however, they had no progeny. On the other hand, petty Mongol princelings of Genghisid stock sometimes settled in Russia. For instance, Berke's nephew adopted the Christian name Peter and founded St. Peter's Monastery in Rostov, where his descendants were long prominent as boyars.[3] 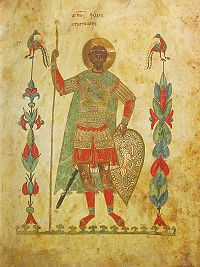 St. Theodore Stratelates, the patron saint of Fyodor the Black, as illustrated in his personal Gospel Book.

Crimean Khanate Khan Meñli I Giray was the maternal grandfather of Suleiman the Magnificent through his daughter Ayşe Hafsa Sultan; thereafter, the House of Osman could also claim descent from Genghis Khan through his son Jochi.

The issue of three Russian-Mongol marriages may be traced down to the present. The most famous was the marriage of St. Fyodor the Black, later proclaimed a patron saint of Yaroslavl, to a daughter of the Mongol khan Mengu-Timur.[4] Fyodor's relations with the khan were idyllic: he spent more time in the Horde (where he was given extensive possessions) than in his capital. Male-line descendants of Fyodor's marriage to the Tatar princess include all the later rulers of Yaroslavl and two dozens princely families (such as the Shakhovskoy, Lvov, or Prozorovsky, among others), which passed Genghis genes to other aristocratic families of Russia.[citation needed]

Prince Gleb of Beloozero, a grandson of Konstantin of Russia, was another Rurikid prince influential at the Mongol court. Gleb married the only daughter of Khan Sartaq. From this marriage descends the House of Belozersk, whose scions include Princes Ukhtomsky and Beloselsky-Belozersky.

The most problematic is the marriage of Narimont, the second son of Gediminas of Lithuania, to Toqta's daughter. The earliest source for this marriage is the "Jagiellonian genealogy", compiled in the 18th-century from Ruthenian chronicles by one Joannes Werner. While the marriage is not utterly impossible (Narimont spent several years in the Horde), there are no extant chronicles which mention Narimont's wife. This highly uncertain gateway derives particular interest from the fact that the Galitzine, Khovansky and Kurakin princely families are Narimont's agnatic descendants.[5]

The Genghisid descent of the Russian tsars or kings of Georgia cannot be reconstructed from extant documentary evidence. The possibility of such a descent for Western European royalty is even less realistic.

The most popular route is based on the Basarab dynasty of Wallachia, which today forms southern Romania. The first attested ancestor of the Basarab princes was a boyar, Thocomerius of Wallachia. There are several theories as to his origin. The most popular theory is that he was of Cuman extraction, as noted by the researcher Istvan Vassary (Toq-Tomir: Tihomir).[6] There were a significant number of Cumans in the region in his time. Also, a major fact such as being descended from Genghis Khan, would have unlikely been hidden, and would have rather been exploited. Some genealogists identify Thocomerius with a Bulgarian boyar named Tikhomir (from the Slavic roots for "calm" and "peace").

Some descendants of the Basarabs moved to neighboring Hungary, and it has been quite convincingly argued that countess Claudine de Rhédey is a descendant of the Basarab rulers.

Numerous studies by teams of biochemists, based on the Y-DNA of modern descendants of Genghis Khan, have indicated that Genghis Khan may have belonged to Haplogroup C-M217.[7]

Zerjal et al. (2003)[8] identified a Y-chromosomal lineage present in about 8% of the men in a large region of Asia (about 0.5% of the world total). The paper suggests that the pattern of variation within the lineage is consistent with a hypothesis that it originated in Mongolia about 1,000 years ago, and thus several generations prior to the birth of Genghis. Such a spread would be too rapid to have occurred by genetic drift, and must therefore be the result of selection. The authors propose that the lineage is carried by likely male-line descendants of Genghis Khan and his close male relatives, and that it has spread through social selection due to the power that Genghis Khan and his direct descendants held and a society which allowed one man to have many children through having multiple wives and widespread rape in conquered cities.[9]

Actor Batdorj-in Baasanjab (also known as Ba Sen) is Genghis Khan's descendant through the Chagatai lineage.[10] He is well known for his portrayals of his ancestors and distant relatives in films and television series (including Genghis Khan himself, his father Yesugei, his son Ögedei Khan, and his grandsons Möngke Khan and Kublai Khan).