This is the largest police force area in England by geographical area covered, and the fifth largest in the United Kingdom. The total population of the force area is approximately 1.5 million. The force also has to cope with an influx of around 11 million visitors to its area during the average year.

The force was formed on 1 April 1967 by the amalgamation of the Devon and Exeter Police, Cornwall County Constabulary and Plymouth City Police, these three constabularies were an amalgamation of 23 city and borough police forces that were absorbed between 1856 and 1947.

Cornwall and the Isles of Scilly BCU

To support the BCUs, several centralised teams operate from the headquarters:

Devon & Cornwall Police's Force Contact Centre is located at Police Headquarters in Middlemoor, Exeter. A second site is located at Crownhill Police Station in Plymouth, and both operate 24/7. Both rooms are considered "virtual" and calls from the counties of Devon and Cornwall, and the Isles of Scilly, are answered at random at either of the two sites. The Force Contact Centres employ mostly civilian staff with sworn officers in both command and support roles. Both 999/112 and non-emergency calls are answered at the two sites, with civilian staff multi-skilled in both disciplines, as well other extraneous duties such as the Force Switchboard, found property recording, crime recording, "Bluelight" calls, requests from other UK and international police forces and emails from the public, partner agencies and the Devon & Cornwall Police website. The Force Switchboard serves to triage non-emergency calls from the public, to ensure that calls that require a priority response are transferred to an emergency operator, and calls that are not a police matter are referred to the correct agency, or advice given at the first point of contact. Calls that require a genuine non-emergency response are transferred to a multi-skilled Call Handler. The Force Switchboard can also be used to request to speak to individual officers or departments within the organisation. Prior to 2011 Devon & Cornwall Police was contactable on 08452 777444 before moving to the Single Non-Emergency Number (SNEN) 101. The conversion to 101 did not change any processes, policies, sites or staff for Devon & Cornwall Police. Radio Dispatch Officers are located at both sites and deploy police officers following calls for service from the Call Handlers.

Call Handlers are regularly faced with calls for service where a person is feeling suicidal and has called the police for help. Since 2014 the Force Contact Centre has been staffed by a mental health professional able to assist operators with dealing with calls for service for persons with mental health issues. This initiative has had a significant impact on the number of persons detained under Section 136 of the Mental Health Act. Support is offered to Force Contact Centre staff who have dealt with distressing incidents. Like police officers, Force Contact Centre staff are bound by policy and legislation, but also are supported in using discretion and common sense in dealing with calls for service, taking into account the risk, harm, threat and vulnerability of a caller. Since early 2015, the Force Contact Centre has encouraged staff to undertake enhanced suicide intervention training, to act as both a single point of contact for a suicide caller (with the benefits of developing a rapport) and to serve as an intermediate stage between first contact call handlers and police negotiators.

Training for Force Contact Centre staff consists of eight weeks of mixed classroom and in-house tuition, the latter conducted with the assistance of a mentor, and a probationary period of 12 months. In early 2015 a two year minimum tenure was imposed on recruits into the Force Contact Centre to discourage candidates from using it as a "foot in the door" to other areas of the police environment.

The Operations Department provides uniformed operational support to the force, and is responsible for traffic policing and tactical support.

Devon and Cornwall Police has officers that patrol on police motorcycles. Motorcycle officers are exempt from wearing body armour as they have to wear motorcycle leathers.

The Force Support group were previously called the Tactical Aid Group (TAG) and Tactical Policing Team (TPT) and are predominantly responsible for public order, marine operations, searches and dealing with potentially violent offenders. It is divided into several sections, including two trained in firearms and one in marine operations.

The Marine Support Unit, known as Force Support Group (FSG) D Section and based in Plymouth, is responsible for underwater search and marine operations. It consists of one sergeant and six constables, all trained divers, and operates a rigid-hulled inflatable boat capable of 45 knots.

Devon and Cornwall Police have officers that patrol the streets and attend incidents with police dogs. The force mainly use German Shepherds, but also have other types of dogs. The dogs are trained in a variety of roles including drugs dogs, explosives dogs and firearms support dogs. Devon and Cornwall Police are the first police force to train dogs to search for missing persons.

The unit, which is headed up by an Inspector, is based at headquarters in Middlemoor, in Exeter.

Devon and Cornwall Police's Armed Response Unit is a 24/7 sub-department of the Operations department that responds to major and serious crimes where firearms are involved as well as this they partake in traffic duties. The unit responds to incidents with firearms and taser guns, and are the only officers in the force who are routinely armed.

The Air Operations Unit is now part of the new National Police Air Service (NPAS), which at present is based at force headquarters and operates a helicopter that provides support quickly and in remote and dangerous places. Devon and Cornwall Police were the first police force in the country to employ the use of a helicopter full-time when the unit was founded in 1979.

The unit used to use a single MBB/Kawasaki BK 117. They now operate a Eurocopter EC145, its call sign was originally OSCAR-99, it is now known as NPAS-44. Eurocopters are a popular brand for UK police forces, especially the EC-135s and 145s, which came into service in April 2010. The unit can scramble in two minutes and can reach most areas of the force within 15 minutes. With the advent of the NPAS in October 2012, the helicopter and associated assets move from D&C Police to NPAS, and the staff are currently on temporary secondment to the NPAS. The helicopter has moved to Exter Airport, and the staff move to NPAS; thus D&C no longer have an independent air support unit, but use the NPAS to cover their resource needs.[6]

The Force Crime Department contains the central units of the force's Criminal Investigation Department (CID), which also has detectives attached to the larger police stations. It is headed by the Force Crime Manager, a Detective Chief Superintendent.

The Major Crime Branch deals with serious crimes such as murder, kidnap, fraud and paedophilia and with crimes that cross boundaries between CID areas and require co-ordination. It contains three Detective Superintendents, all of whom are Senior Investigating Officers (SIOs).

The Covert Operations Unit handles surveillance and major undercover operations. It is headed by a Detective Superintendent assisted by two Detective Chief Inspectors.

The Intelligence Unit collects, collates and distributes intelligence and information of use to the force.

The Performance and Co-ordination Unit is responsible for maintaining investigative standards throughout the force.

The Scientific and Technical Services Unit analyses forensic evidence gathered by scenes of crime officers based at police stations and provides other technical services to the force. The unit has its own forensic pathologist, the only police-employed pathologist in Britain.

When on operational duty, officers wear black wicken layer tops with black uniform trousers and black fleece with police written on the chest and back. Devon and Cornwall Police do not have Brunswick stars on their epaulettes, just the rank and collar number.[7] Formal dress comprises an open-necked tunic, with white shirt/blouse and tie. Constables and Sergeants wear custodian helmet's and collar numbers on their epaulettes, all higher-ranked officers wear peaked caps, name badges and their rank on their epaulettes. The No.1 uniform is accompanied by black boots or shoes and occasionally black gloves, or brown gloves for the rank of Inspector and above. 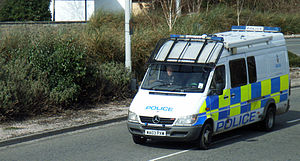 A van of Devon and Cornwall Police

Devon and Cornwall Police use many different makes of vehicles from several different car manufacturers for the diverse categories of response vehicles required by the modern officer. Devon and Cornwall mainly use both the Ford Focus and Vauxhall Astra as patrol vehicles.[8]

Since 1814 the following officers of Devon & Cornwall Constabulary were killed while attempting to prevent or stop a crime in progress:[11]

Devon and Cornwall are amongst the safest counties in the UK, with the 4th lowest crime rate per 1000 people in England. Recorded crime dropped by 12%, between June 2009 and July 2010. This was compared to an 8% drop in crime across England and Wales. Public perceptions of crime and confidence in the police was also better than the national average.[12]

Her Majesty's Inspectorate of Constabulary graded Devon and Cornwall Police as 'fair' for confidence and satisfaction, and 'good' on local crime and policing and protection from serious harm.[15]

In detail they were graded as 'excellent' for reducing crime, suppressing gun crime and suppressing knife crime. They were rated 'low/medium' for all sections of 'value for money' including cost of policing, cost per household, number of officers and PCSO's and proportion of policing cost met from council tax.[15]

Devon and Cornwall Police employs 6,067 people and 505 volunteers. Of which 3,529 are Police Officers, 354 Police Community Support Officers, 598 Special Constables and 2184 are civilian staff.[1]

Devon and Cornwall Police currently is not recruiting Constables, PCSOs, Special Constables, transferred officers, civilian staff or control room operators due to budget cuts. They are only hiring for roles that need to be filled.

Devon and Cornwall Police does have a Police Support Volunteer scheme.

Recruits receive their warrant card and uniform in the first two months of training. Once the training period is over, the new officers are posted in a local division.

The plans have been publicly criticised by all the involved forces, stating that it would lead to poor quality service and a reduction in local policing.[16]

The Devon and Cornwall Police Pipes and Drum Band is a band made up of pipe and drums players who play on behalf of the police force in aid of charity. The band plays at fundraising events for Devon Air Ambulance, Help for Heroes and other events, as well at police occasions such as officer graduations.

The Devon and Cornwall RFC was formed in 1967 following the amalgamation of the Devon, Cornwall and Plymouth Constabularies clubs. A few midweek and Sunday games were played and players were encouraged to play for club sides on Saturdays. However the Saturday team was disbanded in May 1995 due to operational commitments. Today the force still manages to bring together a team when necessary, and play in the National Cup Competition every year.[18]

The force has been involved in a number of social media "blunders", including officers making inappropriate use of Facebook and Twitter, and a Twitter campaign image that had to be withdrawn when it was pointed out that it appeared to depict a police riot officer beating a person lying on the ground with a truncheon.[19]