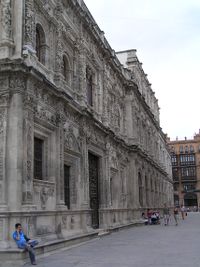 Diego de Riaño (died 1534) was a Spanish architect of the Renaissance. He was one of the most outstanding architects of the Plateresque style.

He was born at Riaño, in Cantabria, and is documented in Seville starting from 1523. In 1527 he commenced the Collegiate of Valladolid and later was director of the works of the Cathedral of Seville, until his death in 1534. He also worked at the University of Osuna.