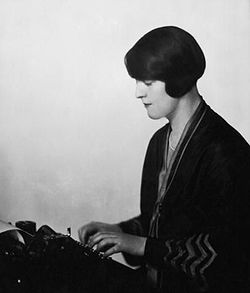 Dorothy Thompson (9 July 1893 – 30 January 1961) was an American journalist and radio broadcaster, who in 1939 was recognized by Time magazine as the second most influential woman in America next to Eleanor Roosevelt.[1] She is notable as the first American journalist to be expelled from Nazi Germany in 1934 and as one of the few women news commentators on radio during the 1930s.[2] She is regarded by some as the "First Lady of American Journalism."[3]

Dorothy Thompson was born in Lancaster, New York, in 1893 to Margaret and Peter Thompson. Margaret died when Dorothy was seven (in 1901), leaving Peter, a Methodist preacher, to raise his daughter alone. Peter soon remarried, but Dorothy did not get along with his new wife, Elizabeth Abbott Thompson.[4] In 1908, Peter sent Dorothy to Chicago to live with his two sisters to avoid further conflict. Here, she attended Lewis Institute for two years before transferring to Syracuse University as a junior. At Syracuse, she studied politics and economics and graduated with a degree in 1914. Because she had the opportunity to be educated, unlike many women of the time, Thompson felt that she had a social obligation to fight for women's suffrage in the United States, which would become the base of her ardent political beliefs. Shortly after graduation, Thompson moved to Buffalo, New York and became involved in the women's suffrage campaign. She worked there until 1920, when she went abroad to pursue her journalism career.[5]

She was married three times, most famously to second husband and Nobel Prize in literature winner Sinclair Lewis. In 1923 she married her first husband, Hungarian Joseph Bard; they divorced in 1927. Thompson married Lewis in 1928 and acquired a house in Vermont. They had one son, Michael Lewis, born in 1930. The couple divorced in 1942.[2] She married her third husband, the artist Maxim Kopf, in 1945, and they were married until Kopf's death in 1958.[3]

Sinclair Lewis and Dorothy Thompson during their honeymoon caravan trip in England, 1928

After working for women’s suffrage in the United States, Thompson relocated to Europe in 1920 to pursue her journalism career. She was interested in the early Zionist movement. Her big break occurred when she visited Ireland in 1920 and was the last to interview Terence MacSwiney, one of the major leaders of the Sinn Féin movement. It was the last interview MacSwiney gave before he was arrested days later and died two months after that.[5] Because of her success abroad, she was appointed Vienna correspondent for the Philadelphia Public Ledger. While working in Vienna, Thompson focused on becoming fluent in German. She met and worked alongside correspondents John Gunther and G.E.R. Gedye. In 1925, she was promoted to Chief of the Central European Service for the Public Ledger (Philadelphia). She resigned in 1927 and not long after, the New York Post appointed her head of its Berlin bureau in Germany.[3] There she witnessed firsthand the rise of the Nazi party. According to her biographer, Peter Kurth, Thompson was "the undisputed queen of the overseas press corps, the first woman to head a foreign news bureau of any importance."

During this time Thompson cultivated many literary friends, particularly among exiled German authors. Among her acquaintances from this period were Odon von Horvath, Thomas Mann, Bertolt Brecht, Stefan Zweig and Fritz Kortner. She developed a close friendship with author Carl Zuckmayer.

Thompson's most significant work abroad took place in Germany in the early 1930s. While working in Munich, Thompson met and interviewed Adolf Hitler for the first time in 1931. This would be the basis for her subsequent book, I Saw Hitler. She wrote about the dangers of Hitler winning power in Germany.[2] Thompson described Hitler in the following terms: "He is formless, almost faceless, a man whose countenance is a caricature, a man whose framework seems cartilaginous, without bones. He is inconsequent and voluble, ill poised and insecure. He is the very prototype of the little man."[6]

Later, when the full force of Nazism had crashed over Europe, Thompson was asked to defend her "Little Man" remarks; it seemed she had underestimated Hitler.[5] The National Socialists considered both the book and her articles offensive and in August 1934, Thompson was expelled from Germany. She was the first journalist to be kicked out.

At the New York Tribune

In 1936 Thompson began writing "On the Record," an incredibly successful syndicated newspaper column. It was read by over ten million people and carried by more than 170 papers. She also wrote a monthly column for the Ladies' Home Journal[3] for twenty-four years (1937–1961); its topics were far removed from war and politics, focusing on gardening, children, art, and other domestic and women's-interest topics.

Around the time same as she started "On the Record," NBC hired Thompson as a news commentator. She began in 1936 and remained with NBC until 1938. Her radio broadcasts went on to become some of the most popular in the United States, making her one of the most sought after female public speakers of her time. When Adolf Hitler invaded Poland in 1939, Thompson went on the air for fifteen consecutive days and nights.[4]

In 1938, Thompson championed the cause of a Polish-German Jew Herschel Grynszpan, whose assassination in Paris of a minor German diplomat, Ernst vom Rath, had been used as propaganda by the Nazis to trigger the events of Kristallnacht in Germany. Thompson's broadcast on NBC radio was heard by millions of listeners, and led to an outpouring of sympathy for the young assassin. Under the banner of the Journalists' Defense Fund, over $40,000 USD was collected, enabling famed European lawyer Vincent de Moro-Giafferi to take up Grynszpan's case.

As Hitler waged war on the Bolsheviks, Thompson took the world stage. She was featured on the cover of Time (magazine) that same year, with an accompanying picture of her speaking into an NBC radio microphone. The article was captioned "she rides in the smoking car" and it named her the second most popular and influential woman in the country behind Eleanor Roosevelt. She was one of the most respected women of her age. This same article explained Thompson's influence: "Dorothy Thompson is the U. S. clubwoman's woman. She is read, believed and quoted by millions of women who used to get their political opinions from their husbands, who got them from Walter Lippmann."[1] She was a keynote speaker at the Biltmore Conference, and by war's end was regarded as one of the most effective spokespersons for Zionism. She switched her views round radically after a trip to Palestine in 1945, and ran into difficulties,including accusations of anti-Semitism, which she strongly rebuffed, after being warned that hostility toward Israel was, in the American press world, “almost a definition of professional suicide.”[7][8] She eventually concluded that Zionism was a recipe for perpetual war.[9]

In Woman of the Year (1942) Katharine Hepburn played Tess Harding, a character directly based on Thompson. The Broadway musical is based on Thompson as well, this time played by Lauren Bacall.[2]

Her marriage to Sinclair Lewis was the subject of the Broadway play Strangers, where she was played by Lois Nettleton. The play, written by Sherman Yellen, opened on March 4, 1979 and closed after nine performances.

"I am speaking of this boy. Soon he will go on trial. The news is that on top of all this terror, this horror, one more must pay. They say he will go to the guillotine, without a trial by jury, with the rights that any common murderer has ..."
"Who is on trial in this case? I say we are all on trial. I say the men of Munich are on trial, who signed a pact without one word of protection for helpless minorities. Whether Herschel Grynszpan lives or not won't matter much to Herschel. He was prepared to die when he fired those shots. His young life was already ruined. Since then, his heart has been broken into bits by the results of his deed."
"They say a man is entitled to a trial by a jury of his peers, and a man's kinsmen rally around him, when he is in trouble. But no kinsman of Herschel's can defend him. The Nazi government has announced that if any Jews, anywhere in the world, protest at anything that is happening, further oppressive measures will be taken. They are holding every Jew in Germany as a hostage."
"Therefore, we who are not Jews must speak, speak our sorrow and indignation and disgust in so many voices that they will be heard. This boy has become a symbol, and the responsibility for his deed must be shared by those who caused it."

"[W]e Americans of German descent[10] raise our voices in denunciation of the Hitler policy of cold-blooded extermination of the Jews of Europe and against the barbarities committed by the Nazis against all other innocent peoples under their sway. These horrors ... are, in particular, a challenge to those who, like ourselves are descendants of the Germany that once stood in the foremost ranks of civilization. ... [We] utterly repudiate every thought and deed of Hitler and his Nazis ... [and urge Germany] to overthrow a regime which is in the infamy of German history.[11]