Arnold was born as Gunther Edward Arnold Schneider on the Lower East Side of New York City, the son of German immigrants Elizabeth (Ohse) and Carl Schneider. His schooling came at the East Side Settlement House.[1]

Interested in acting since his youth (he made his first stage appearance at the age of 12 as Lorenzo in The Merchant of Venice), Arnold made his professional stage debut in 1907. He found work as an extra for Essanay Studios and World Studios, before landing his first significant role in 1916's The Misleading Lady. In 1919, he left film for a return to the stage, and did not appear again in movies until he made his talkie debut in Okay America! (1932). He recreated one of his stage roles in one of his early films, Whistling in the Dark (1933). His role in the 1935 film Diamond Jim boosted him to stardom. He reprised the role of Diamond Jim Brady in the 1940 film Lillian Russell. He also played a similar role in The Toast of New York (1937), another fictionalized version of real-life business chicanery, for which he was billed above Cary Grant in the posters with his name in much larger letters. 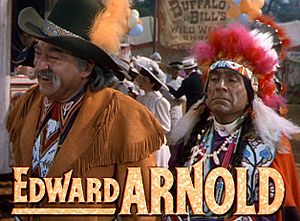 Arnold (left) with J. Carrol Naish, from the trailer for Annie Get Your Gun (1950)

Arnold appeared in over 150 movies. Although he was labeled "box office poison" in 1938 by an exhibitor publication (he shared this dubious distinction with Joan Crawford, Greta Garbo, Marlene Dietrich, Mae West, Fred Astaire and Katharine Hepburn), he never lacked for work. Rather than continue in leading man roles, he gave up losing weight and went after character parts instead. Arnold was quoted as saying, "The bigger I got, the better character roles I received." He was such a sought-after actor, he often worked on two pictures at the same time.

Arnold was an expert at playing rogues and authority figures, and superb at combining the two as powerful villains quietly pulling strings. He was best known for his roles in Come and Get It (1936), Sutter's Gold (1936), the aforementioned The Toast of New York (1937), You Can't Take It with You (1938), Mr. Smith Goes to Washington (1939) and The Devil and Daniel Webster (1941). He was the first actor to portray Rex Stout's famous detective Nero Wolfe, starring in Meet Nero Wolfe (1936), the film based on the first novel in the series.

He played blind detective Duncan Maclain in two movies based on the novels by Baynard Kendrick, Eyes in the Night (1942) and The Hidden Eye (1945).

Arnold was host for Your Star Showcase, "a series of 52 half-hour television dramas ... released by Television Programs of America."[4] The series was launched January 1, 1954, to run in 1950 cities.[4] He also co-starred in "Ever Since the Day," an episode of Ford Theatre on NBC.[5]

Midwestern University awarded Arnold an honorary Doctor of Letters degree on May 24, 1951.[1] Arnold has a star on the Hollywood Walk of Fame located at 6225 Hollywood Blvd.[6]

Starting in the 1940s, Arnold became involved in Republican politics and was mentioned as a possible G.O.P. candidate for the United States Senate. He lost a closely contested election for Los Angeles County Supervisor and said at the time that perhaps actors were not suited to run for political office.[citation needed]

He died at his home in Encino, California from a cerebral hemorrhage associated with atrial fibrillation, aged 66. He was interred in the San Fernando Mission Cemetery.