Elbert Green Hubbard (June 19, 1856 – May 7, 1915) was an American writer, publisher, artist, and philosopher. Raised in Hudson, Illinois, he had early success as a traveling salesman for the Larkin Soap Company. Hubbard is known best as the founder of the Roycroft artisan community in East Aurora, New York, an influential exponent of the Arts and Crafts Movement.

Among Hubbard's many publications were the fourteen-volume work Little Journeys to the Homes of the Great and the short publication A Message to Garcia. He and his second wife, Alice Moore Hubbard, died aboard the RMS Lusitania when it was sunk by a German submarine off the coast of Ireland on May 7, 1915.

Hubbard was born in Bloomington, Illinois, to Silas Hubbard and Juliana Frances Read on June 19, 1856. In the autumn of 1855, his parents had relocated to Bloomington from Buffalo, New York, where his father had a medical practice. Finding it difficult to settle in Bloomington—mainly due to the presence of several already established doctors—Silas moved his family to Hudson, Illinois the next year.[1]:7 Nicknamed "Bertie" by his family, Elbert had two older siblings: Charlie, who was largely bed-ridden after a fall when he was young, and Hannah Frances, nicknamed "Frank" like her mother.[1]:10–11 Charlie died at the age of nine, when Elbert was three-and-a-half years old. Elbert also had three younger sisters who were named Mary, Anna Miranda, and Honor.[1]:11–12

The Hubbard children attended the local public school, a small building with two rooms that overlooked a graveyard. Thirty years later, Elbert described his schooling days as "splendid" and "tinged with no trace of blue.... I had no ambitions then—I was sure that some day I could spell down the school, propound a problem in fractions that would puzzle the teacher, and play checkers in a way that would cause my name to be known throughout the entire township."[1]:14 Mary would remember her older brother's role as a school troublemaker, noting that he "annoyed his teachers... occasionally by roaring inappropriately when his too-responsive sense of humor was tickled."[1]:15

Elbert's first business venture was selling Larkin soap products, a career which eventually brought him to Buffalo, New York. His innovations for Larkin included premiums and "leave on trial".[2]

Elbert Hubbard, A Message to Garcia and Thirteen Other Things p.147

Hubbard described himself as an anarchist and a socialist.[3]:149 He believed in social, economic, domestic, political, mental and spiritual freedom.[3]:ii In A Message to Garcia and Thirteen Other Things (1901), Hubbard explained his Credo by writing "I believe John Ruskin, William Morris, Henry Thoreau, Walt Whitman and Leo Tolstoy to be Prophets of God, and they should rank in mental reach and spiritual insight with Elijah, Hosea, Ezekiel and Isaiah."[3]:i Yet, common themes throughout his works portray him as a capitalist, with his pro-business beliefs and anti-union beliefs.

Hubbard wrote a critique of war, law and government in the booklet Jesus Was An Anarchist (1910). Originally published as The Better Part in A Message to Garcia and Thirteen Other Things, Ernest Howard Crosby described Hubbard's essay as "The best thing Elbert ever wrote."[4]

Another book which was written by Hubbard is titled Health and Wealth. It was published in 1908 and includes many short truisms. 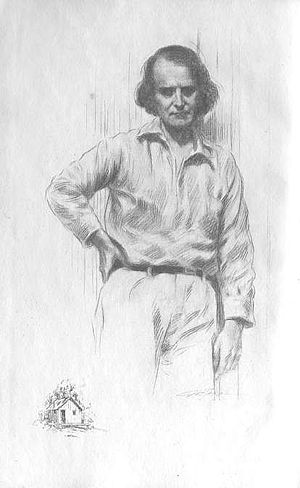 Elbert Hubbard illustrated in the frontispiece of The Mintage.

His best-known work came after he founded Roycroft, an Arts and Crafts community in East Aurora, New York in 1895. This grew from his private press which he had initiated in collaboration with his first wife Bertha Crawford Hubbard, the Roycroft Press, inspired by William Morris' Kelmscott Press.[5] Although called the "Roycroft Press" by latter-day collectors and print historians, the organization called itself "The Roycrofters" and "The Roycroft Shops".[6]

Hubbard edited and published two magazines, The Philistine—A Periodical of Protest and The FRA--A Journal of Affirmation. The Philistine was bound in brown butcher paper and featuring largely satire and whimsy. (Hubbard himself quipped that the cover was butcher paper because: "There is meat inside."[7] The Roycrofters produced handsome, if sometimes eccentric, books printed on handmade paper, and operated a fine bindery, a furniture shop, and shops producing modeled leather and hammered copper goods. They were a leading producer of Mission style products.

Hubbard's second wife, Alice Moore Hubbard, was a graduate of the New Thought-oriented Emerson College of Oratory in Boston and a noted suffragist. The Roycroft Shops became a site for meetings and conventions of radicals, freethinkers, reformers, and suffragists. Hubbard became a popular lecturer, and his homespun philosophy evolved from a loose William Morris-inspired socialism to an ardent defense of free enterprise and American know-how. Hubbard was mocked in the Socialist press for "selling out". He replied that he had not given up any ideal of his, but had simply lost faith in Socialism as a means of realizing them.[8]

An example of his trenchant critical style may be found in his saying that prison is, "An example of a Socialist's Paradise, where equality prevails, everything is supplied and competition is eliminated."[9]

In 1908, Hubbard was the main speaker at the annual meeting of The Society in Dedham for Apprehending Horse Thieves.[10] Before he died, Hubbard planned to write a story about Felix Flying Hawk, the only son of Chief Flying Hawk. Hubbard had learned about Flying Hawk during 1915 from Major Israel McCreight.[11]

In 1912, the famed passenger liner RMS Titanic was sunk after hitting an iceberg. Hubbard subsequently wrote of the disaster,[12] singling out the story of Ida Straus, who as a woman was supposed to be placed on a lifeboat in precedence to the men, but refused to board the boat, and leave her husband.[lower-alpha 1] Hubbard then added his own commentary:

Mr. and Mrs. Straus, I envy you that legacy of love and loyalty left to your children and grandchildren. The calm courage that was yours all your long and useful career was your possession in death. You knew how to do three great things—you knew how to live, how to love and how to die. One thing is sure, there are just two respectable ways to die. One is of old age, and the other is by accident. All disease is indecent. Suicide is atrocious. But to pass out as did Mr. and Mrs. Isidor Straus is glorious. Few have such a privilege. Happy lovers, both. In life they were never separated and in death they are not divided."[12]

At the beginning of World War I, Hubbard published a great deal of related commentary in The Philistine and became anxious to cross the ocean, report on the war and interview the Kaiser himself. However, Hubbard had pleaded guilty on January 11, 1913, in the court of U.S. District Court Judge John R. Hazel for violating Section 211 of the penal code.[13] Hubbard was convicted on one count of circulating "objectionable" (or "obscene") matter in violation of the postal laws.[14] The sentence was suspended on five additional counts, but Hazel fined Hubbard $100, and the federal conviction resulted in a revocation of the publisher's civil rights.[15][clarification needed]

Hubbard requested a presidential pardon from William Howard Taft, but the administration discarded the request as "premature".[15] When his application for a passport was denied in 1915, Hubbard went directly to the White House and pleaded with Woodrow Wilson's personal secretary, Joseph P. Tumulty. At the time, the President was in the midst of a cabinet meeting, but Tumulty interrupted and, as a result, the Secretary of State (William Jennings Bryan) and Attorney General Thomas Gregory were also able to hear of Hubbard's situation and need.[16]

The pardon was found to be appropriate, and Hubbard's clemency application process lasted exactly one day.[17] Seventy-five percent of those petitioning for clemency during that fiscal year were not so fortunate; their requests were denied or adversely reported or no action was taken.[17] On receiving his pardon, Hubbard obtained a passport and, on May 1, 1915, left with his wife on a voyage to Europe.[lower-alpha 2]

A little more than three years after the sinking of the Titanic, the Hubbards boarded the RMS Lusitania in New York City. On May 7, 1915, while at sea 11 miles (18 km) off the Old Head of Kinsale, Ireland, the ship was torpedoed and sunk by the German U-boat U-20. His end seems to have followed the pattern he had admired in Mrs. Straus. In a letter to Elbert Hubbard II dated March 12, 1916, Ernest C. Cowper, a survivor of this event, wrote:[19]

I cannot say specifically where your father and Mrs. Hubbard were when the torpedoes hit, but I can tell you just what happened after that. They emerged from their room, which was on the port side of the vessel, and came on to the boat-deck.

Neither appeared perturbed in the least. Your father and Mrs. Hubbard linked arms—the fashion in which they always walked the deck—and stood apparently wondering what to do. I passed him with a baby which I was taking to a lifeboat when he said, "Well, Jack, they have got us. They are a damn sight worse than I ever thought they were."

They did not move very far away from where they originally stood. As I moved to the other side of the ship, in preparation for a jump when the right moment came, I called to him, "What are you going to do?" and he just shook his head, while Mrs. Hubbard smiled and said, "There does not seem to be anything to do."

The expression seemed to produce action on the part of your father, for then he did one of the most dramatic things I ever saw done. He simply turned with Mrs. Hubbard and entered a room on the top deck, the door of which was open, and closed it behind him.

It was apparent that his idea was that they should die together, and not risk being parted on going into the water.

Mack Bolan, the main character of Don Pendleton's fiction series The Executioner, frequently cites as inspiration a Hubbard quote, "God will not look you over for medals, diplomas, or degrees – but for scars."[22][23]

At the end of Rabbit's Feat, a 1960 Bugs Bunny and Wile E. Coyote cartoon, Bugs quotes Hubbard by saying, "Don't take life too seriously. You'll never get out of it alive."

The phrase "The graveyards are full of indispensable men" may have originated with Hubbard.[24]

A quote of Hubbard's from his biography of American automotive developer John North Willys, "Do nothing, say nothing, and be nothing, and you’ll never be criticized." is often misattributed to Aristotle.[25]