Elias Boudinot (/ᵻˈlaɪəs buːˈdɪnɒt/ ee-LY-əs boo-DIN-ot; May 2, 1740 – October 24, 1821) was a lawyer and statesman from Elizabeth, New Jersey who was a delegate to the Continental Congress (more accurately referred to as the Congress of the Confederation) and served as President of Congress from 1782 to 1783. He was elected as a U.S. Congressman for New Jersey following the American Revolutionary War. He was appointed by President George Washington as Director of the United States Mint, serving from 1795 until 1805. 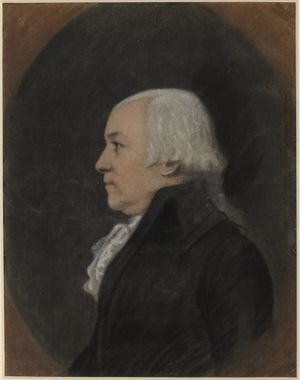 Elias Boudinot was born in Philadelphia on May 2, 1740. His father, Elias Boudinot III, was a merchant and silversmith; he was a neighbor and friend of Benjamin Franklin. His mother, Mary Catherine Williams, was born in the British West Indies; her father was from Wales. Elias' paternal grandfather, Elie (sometimes called Elias) Boudinot, was the son of Jean Boudinot and Marie Suire of Marans, Aunis, France. They were a Huguenot (French Protestant) family who fled to New York about 1687 to avoid the religious persecutions of King Louis XIV.

Mary Catherine Williams and Elias Boudinot, Sr. were married on August 8, 1729. Over the next twenty years, they had nine children. The first, John, was born in the British West Indies-Antigua. Of the others, only the younger Elias and his siblings Annis, Mary, and Elisha reached adulthood. Annis became one of the first published women poets in the Thirteen Colonies, and her work appeared in leading newspapers and magazines. Elisha Boudinot became Chief Justice of the Supreme Court of New Jersey.

After studying and being tutored at home, Elias Boudinot went to Princeton, New Jersey to read the law as a legal apprentice to Richard Stockton. An attorney, he had married Elias' older sister Annis Boudinot. Richard Stockton was later a signatory of the Declaration of Independence.

In 1760, Boudinot was admitted to the bar, and began his practice in Elizabeth, New Jersey. He owned land adjacent to the road from Elizabethtown to Woodbridge Township, New Jersey. 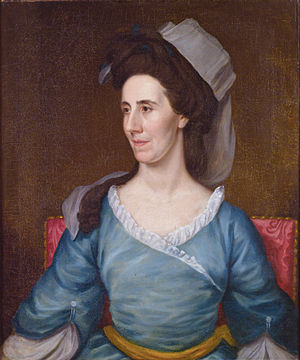 Susan married William Bradford, who became Chief Justice of Pennsylvania and Attorney General under George Washington. After her husband's death in 1795, Susan Boudinot Bradford returned to her parents' home to live. The young widow edited her father's papers. Now held by Princeton University, these provide significant insight into the events of the Revolutionary era.

In 1805, Elias, Hannah and Susan moved to a new home in Burlington, New Jersey. Hannah died a few years after their move, and Elias lived there for the remainder of his years.

In his later years, Boudinot invested and speculated in land. He owned large tracts in Ohio including most of Green Township in what is now the western suburbs of Cincinnati, where there is a street bearing his surname. At his death, he willed 13,000 acres (53 km2) to the city of Philadelphia for parks and city needs. He was buried in Princeton's Stony Brook Quaker Meeting House Burial Ground.[1]

Boudinot became a prominent lawyer and his practice prospered. As the revolution drew near, he aligned with the Whigs, and was elected to the New Jersey provincial assembly in 1775. In the early stages of the Revolutionary War, he was active in promoting enlistment; several times he loaned money to field commanders to purchase supplies. Boudinot helped support the activities of rebel spies. After the British occupation of New York City, spies were sent to Staten Island and Long Island, New York to observe and report on movements of specific British garrisons and regiments.

On May 5, 1777, General George Washington asked Boudinot to be appointed as commissary general for prisoners. Congress through the board of war concurred. Boudinot was commissioned as a colonel in the Continental Army for this work. He served until July 1778, when competing responsibilities forced him to resign. The commissary managed enemy prisoners, and also was responsible for supplying American prisoners who were held by the British.

In November 1777, the New Jersey legislature named Boudinot as one of their delegates to the Second Continental Congress. His duties as Commissary prevented his attendance, so in May 1778 he resigned. By early July he had been replaced and attended his first meeting of the Congress on July 7, 1778. As a delegate, he still continued his concerns for the welfare of prisoners of war. His first term ended that year.

In 1781, Boudinot returned to the Congress, for a term lasting through 1783. In November 1782, he was elected as President of the Continental Congress for a one-year term. The President of Congress was a mostly ceremonial position with no real authority, but the office did require him to handle a good deal of correspondence and sign official documents.[2] On April 15, 1783 he signed the Preliminary Articles of Peace.[3] When the United States (US) government was formed in 1789, Boudinot was elected from New Jersey to the US House of Representatives. He was elected to the second and third congresses as well, where he generally supported the administration. He refused to join the expansion of affiliated groups that formed formal political parties.

In 1794, he declined to serve another term, and left Congress in early 1795. In October 1795, President George Washington appointed him as Director of the United States Mint, a position he held through succeeding administrations until he retired in 1805.

In addition to serving in political office, Elias supported many civic, religious, and educational causes during his life. Boudinot served as one of the trustees of the College of New Jersey (later Princeton University) for nearly half a century, from 1772 until 1821. When the Continental Congress was forced to leave Philadelphia in 1783 while he was president, he moved the meetings to Princeton, where they met in the College's Nassau Hall.

On September 24, 1789, the House of Representatives voted to recommend the First Amendment of the newly drafted Constitution to the states for ratification. The next day, Congressman Boudinot proposed that the House and Senate jointly request of President Washington to proclaim a day of thanksgiving for “the many signal favors of Almighty God.” Boudinot said that he

could not think of letting the session pass over without offering an opportunity to all the citizens of the United States of joining, with one voice, in returning to Almighty God their sincere thanks for the many blessings he had poured down upon them.[4]

Boudinot was elected a member of the American Antiquarian Society in 1814.[5]

A devout Presbyterian, Boudinot supported missions and missionary work. He wrote The Age of Revelation in response to Thomas Paine's The Age of Reason. He was one of the founders of the American Bible Society, and after 1816 served as its President.

He argued for the rights of black and American Indian citizens, and sponsored students to the Board School for Indians in Connecticut. One of these, a young Cherokee named Gallegina Uwatie, also known as Buck Watie, stayed with him in Burlington on his way to the school. The two so impressed each other that Gallegina asked for and was given permission to adopt the statesman's name. Later known as Elias Boudinot, he was an editor of the Cherokee Phoenix, the nation's first newspaper, which was published in Cherokee and English.

The Presbyterian Historical Society in Philadelphia has a collection of incoming correspondence and several legal agreements pertaining to land ownership related to Boudinot from 1777–1821 in its holdings. The correspondence dating from 1777–1778 almost exclusively deals with the trading and releasing of prisoners.