Ellensburg is a city in, and the county seat of, Kittitas County, Washington, United States.[6] The population was 18,174 at the 2010 census.[7] Ellensburg is located just east of the Cascade Range on Interstate 90 and is known as the most centrally located city in the state. Ellensburg is the home of Central Washington University (CWU).

The surrounding Kittitas Valley is internationally known for the timothy-hay that it produces. There are several local hay brokering and processing operations that ship to Pacific Rim countries. Downtown Ellensburg has many historic buildings, many of which were constructed in the late 19th century. This is a legacy of its bid to be the state capital, which it lost to Olympia.[8] CWU being placed there is another product of that legacy. The state legislature selected Ellensburg as the location for the then Normal School as a consolation prize.[9] Eastern Washington has a much drier climate than Western Washington, and some Seattle-area residents have moved to the city and commute over Snoqualmie Pass on Interstate 90 to jobs located in the Puget Sound region. 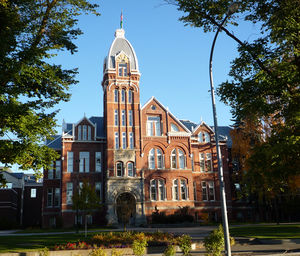 Ellensburg was officially incorporated on November 26, 1883. John Alden Shoudy came to the Kittitas Valley in 1871, and purchased a small trading post from Andrew Jackson "A.J." Splawn, called "Robber's Roost." Robber's Roost was the first business in the valley, other than the early trading that occurred among American Indians, cattle drivers, trappers, and miners. Robber's Roost was located on the present-day 3rd Avenue, just west of Main Street near the alley. There is a placard on the wall commemorating the location, as well as a small stone monument against the wall on the sidewalk. Shoudy named the town after his wife, Mary Ellen Shoudy, and after Pittsburgh because of his love for the city. Thus he officially began the city of Ellensburgh around 1872. Shoudy was not the first settler in the Kittitas Valley, nor was he the first businessperson, but he was responsible for platting the city of Ellensburgh in the 1870s, and he was the person who named the streets in the downtown district.

The city was originally named Ellensburgh, until the final -h was dropped under standardization pressure from the United States Postal Service and Board of Geography Names in 1894.[10]

There were several early newspapers in Ellensburg. The Daily Record, however, began in 1909 and is the name of the local newspaper today.[11]

Concerns over the state of Ellensburg's historic downtown led to the formation of the Ellensburg Downtown Association to work on revitalizing the area.[12]

The City of Ellensburg is home to a number of wonderful local art museums and galleries:

Every first Friday of each month, Ellensburg hosts First Friday Art Walk from 5:00 to 7:00 pm. This downtown event showcases art of all forms. The local businesses, galleries and museums come alive with art, music, wine and people as they celebrate art in the community.

There were 7,301 households, of which 19.3% had children under the age of 18 living with them, 28.2% were married couples living together, 8.2% had a female householder with no husband present, 3.1% had a male householder with no wife present, and 60.4% were non-families. 35.1% of all households were made up of individuals and 9.6% had someone living alone who was 65 years of age or older. The average household size was 2.16 and the average family size was 2.86.

There were 6,249 households, of which 20.8% had children under the age of 18 living with them, 31.4% were married couples living together, 8.1% had a female householder with no husband present, and 57.6% were non-families. 35.5% of all households were made up of individuals and 9.1% had someone living alone who was 65 years of age or older. The average household size was 2.12 and the average family size was 2.84.

Kittitas County supported Senator John McCain of Arizona over then-Senator Barack Obama of Illinois in the 2008 presidential election, with both receiving 53 and 45 percent of the vote, respectively.[29] Then, in the 2010 Senate race, Republican Dino Rossi carried the city over Democratic Senator Patty Murray with 50.7 percent of the vote to Murray's 49.3 percent.