From Infogalactic: the planetary knowledge core
Jump to: navigation, search
For the Anglican Archdeacon of London, see Ernest Holmes (priest).

Ernest Shurtleff Holmes (January 21, 1887 – April 7, 1960) was an American New Thought writer, teacher, and leader. He was the founder of a Spiritual movement known as Religious Science, a part of the greater New Thought movement, whose spiritual philosophy is known as "The Science of Mind." He was the author of The Science of Mind and numerous other metaphysical books, and the founder of Science of Mind magazine, in continuous publication since 1927. His books remain in print, and the principles he taught as "Science of Mind" have inspired and influenced many generations of metaphysical students and teachers. Holmes had previously studied another New Thought teaching, Divine Science, and was an ordained Divine Science Minister.[1] His influence beyond New Thought can be seen in the self-help movement.

Holmes was born January 21, 1887, in Lincoln, Maine, to a poor family. He was the son of Anna Columbia (Heath) and William Nelson Holmes.[2] He left school and his family in Maine for Boston, Massachusetts at the age of 15. From 1908 to 1910 he worked in a store to pay for his tuition at the Leland Powers School of Expression in Boston. There he was introduced to Mary Baker Eddy's Science and Health, as well as Christian Science.[3]

In 1912 Holmes joined his brother Fenwicke in Venice, California. In addition to taking up a job with the city government, Holmes and his brother, a Congregationalist minister, studied the writings of Thomas Troward, Ralph Waldo Emerson, William Walker Atkinson, and Christian D. Larson.[4]

After leading small private meetings throughout the city, in 1916 Ernest Holmes was invited to speak at the Metaphysical Library in Los Angeles. This led him to repeat engagements, and on a nationwide tour. In 1919 he published his first book, The Creative Mind, and after almost a decade of touring Holmes committed to remaining in the L.A. area to complete his major work, The Science of Mind. It was published in 1926.[5]

That year Holmes started speaking each Sunday morning in a theatre in the Ambassador Hotel that seated 625. In November 1927, they moved to the 1,295-seat Ebell Theatre. Subsequently, Holmes lectures continued moving to ever-larger spaces, including Biltmore Hotel, and the Wiltern Theatre. which seats more than 2800. In February 1927, Holmes incorporated the Institute of Religious Science and School of Philosophy, Inc., and later that year he began publishing Science of Mind magazine.[6] In 1935 he reincorporated his organization as the Institute of Religious Science and Philosophy, and in 1954 it was reestablished again as a religious organization called the Church of Religious Science.[7][8] 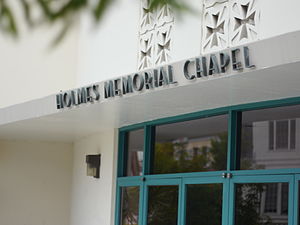 In the 1920s, Holmes published the following statement of beliefs:[9]

Through his research, Holmes created a "structure of concepts" based on the religions and philosophies of human history, sometimes correlating his findings with the then-emerging "new" physics. He named the teaching a science because he believed that its principles were scientifically provable in practice. He wrote, "I would rather see a student of this Science prove its Principle than to have him repeat all the words of wisdom that have ever been uttered."[10]

Holmes ultimately came to believe in a "core concept" – what he saw as a "Golden thread of truth" that ran through all of the world's religions as well as in science and philosophy.[11]

Ernest Holmes received a variety of recognition for his work. In 1945, he was awarded the honorary degree of Doctor of Philosophy by Andhra University in India. The California College of Medicine, and the Foundation Academic University of Spiritual Understanding in Venice, Italy, awarded him a Doctor of Letters. In 1942, he was bestowed with the Cross of the Commander of the Grand Humanitarian Prize of Belgium, and in 1944 he was named an honorary member of the Eugene Field Society.