Erwin Nathaniel Griswold (July 14, 1904 – November 19, 1994) was an appellate attorney who argued many cases before the U.S. Supreme Court. Griswold served as Solicitor General of the United States (1967–1973) under Presidents Lyndon B. Johnson and Richard M. Nixon. He also served as Dean of Harvard Law School for 21 years. Several times he was considered for appointment to the U.S. Supreme Court. During a career that spanned more than six decades, he served as member of the U.S. Commission on Civil Rights and as President of the American Bar Foundation.

In 1929, Griswold was admitted to the Ohio bar and spent six weeks working as a partner in his father's Cleveland law firm of Griswold, Green, Palmer & Hadden. He subsequently joined the U.S. Office of the Solicitor General as a staff attorney and served as a special assistant to the attorney general from 1929-1934. There he worked under Solicitor General Charles Evans Hughes, Jr., son of the future Chief Justice of the United States, Charles Evans Hughes, Sr. He became an expert at arguing tax cases before the Supreme Court, and is considered one of the great scholars in tax law.

Griswold joined the Harvard faculty in 1934, first as an associate legal professor, and then as a full professor from 1935-1946. Known for a very keen intellect, Griswold was made dean of Harvard Law School from 1946 and served in that capacity until 1967. One of the dominant figures in American legal education, he doubled the size of the faculty, bringing in such legal luminaries as Derek Bok (who succeeded him as Dean, and later became President of Harvard University), Kingman Brewster (later President of Yale University), and Alan Dershowitz. 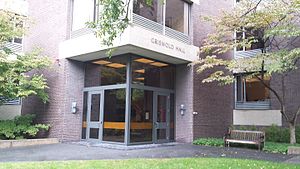 As Dean, Griswold enlarged the school's curriculum to include such specialized topics as labor relations, family law, and copyright law. In addition, he expanded the school's physical plant, library holdings, and financial resources. Finally, he oversaw the enrollment of the first female students in 1950. In 1979, as an honorary gesture for his impact on the Harvard community, Harvard dedicated Griswold Hall, housing the dean’s office, faculty offices, and a classroom.

In the 1950s, Griswold served as an expert witness for Thurgood Marshall, who was then the legal director of the NAACP, in several cases that the association brought to lay the foundation for the Supreme Court’s desegregation order in Brown v. Board of Education. Griswold was a member of the U.S. Civil Rights Commission from 1961-1967.

On the same day that Griswold retired as Dean and Langdell Professor of Law in 1967, President Johnson appointed him United States Solicitor General. Johnson was a Democrat, and Griswold a moderate Republican, but the bipartisan appointment was widely praised. As Solicitor General, Griswold advocated in support of Great Society legislation, and he continued on in the position under President Nixon until 1973. As Solicitor General, Griswold unsuccessfully argued against the publication of the Pentagon Papers by The New York Times, because such publication would cause a "grave and immediate danger to the security of the United States." Years later, he reversed his position in an op-ed piece in The Washington Post, writing, "I have never seen any trace of a threat to the national security from the publication" of the Pentagon Papers." He suggested that government demands for secrecy be treated with some skepticism by the public.

In 1973, Griswold resigned as Solicitor General and joined the international law firm of Jones Day Reavis & Pogue in Washington, D.C. He continued to argue many cases before the Supreme Court up until his death in 1994. He also served as a mentor to many of the young lawyers in the firm. From 1983-1994, he served the U.S. government as a liaison between U.S. and Soviet lawyers in the Lawyers Alliance Nuclear Arms Control. Griswold was also active in the Supreme Court Historical Society, serving as Chairman of the Board of Trustees at the time of his death in 1994.

Griswold also served as a trustee of his undergraduate alma mater, Oberlin College. In October 2014, the President of Oberlin, Marvin Krislov, in a detailed tribute to Griswold, announced the creation of the Erwin N. Griswold '25 Chair in Politics and Law.[2]

Griswold wrote several books including Spendthrift Trusts (1936), Cases on Federal Taxation (1940), Cases on Conflict Laws (1942), and arguably his most popular, The Fifth Amendment Today, Law and Lawyers in the United States (1992). Throughout his career he received numerous honorary degrees from many prestigious universities, including Columbia University, Northwestern University, Brown University, and the University of Sydney. Griswold served as president of the Association of American Law Schools from 1957 to 1958 and as President of the American Bar Foundation from 1971-1974. In 1978, the American Bar Association awarded Griswold the gold medal for his outstanding contributions and service to the legal community.

Griswold's memoirs were published in 1992 under the title Ould Fields, New Corne: The Personal Memoirs of a Twentieth Century Lawyer.[3]

Erwin Griswold died on November 19, 1994, in Boston, at the age of 90. He was survived by his wife of 62 years, Harriet Allena Ford, two children, as well as five grandchildren.

This article incorporates public domain material from websites or documents of the Office of the Solicitor General.