From Infogalactic: the planetary knowledge core
Jump to: navigation, search
This article is about family values as a political concept. For the rock music tour, see Family Values Tour. For other uses, see Family values (disambiguation).

Family values, sometimes referred to as Familial values, are traditional or cultural values (that is, values passed on from generation to generation within families) that pertain to the family's structure, function, roles, beliefs, attitudes, and ideals. In the social sciences, sociologists may use the term "traditional family" in order to refer specifically to the child-rearing environment that sociologists formerly called the norm. This "traditional family" involves a middle-class family with a breadwinner father and a homemaker mother, raising their biological children. Any deviation from this family model is considered a "nontraditional family". Nontraditional families, nevertheless, make up the majority of American households, as of now.[1]

According to Dictionary.com, "family values" is defined as "the moral and ethical principles traditionally upheld and transmitted within a family, as honesty, loyalty, industry, and faith."[2]

According to Merriam-Webster, "family values" are "values especially of a traditional or conservative kind which are held to promote the sound functioning of the family and to strengthen the fabric of society".[3]

According to OxfordDictionaries.com, "family values" are "values held to be traditionally learned or reinforced within a family, such as those of high moral standards and discipline."[4]

The Family First Party originally contested the 2002 South Australian state election, where former Assemblies of God pastor Andrew Evans won one of the eleven seats in the 22-seat South Australian Legislative Council on 4 percent of the statewide vote. The party made their federal debut at the 2004 general election, electing Steve Fielding on 2 percent of the Victorian vote in the Australian Senate, out of six Victorian senate seats up for election. Both MPs were able to be elected with Australia's Single Transferable Vote and Group voting ticket system in the upper house. The party opposes abortion, euthanasia, harm reduction, gay adoptions, in-vitro fertilisation (IVF) for gay couples and gay civil unions It supports drug prevention, zero tolerance for law breaking, rehabilitation, and avoidance of all sexual behaviors it considers deviant.

In the 2007 Australian election, Family First came under fire for giving preferences in some areas to the Liberty and Democracy Party, a libertarian party that supports legalization of incest, gay marriage, and drug use.[5]

Family values was a recurrent theme in the Conservative government of John Major. His Back to Basics initiative became the subject of ridicule after the party was affected by a series of sleaze scandals. John Major himself, the architect of the policy, was subsequently found to have had an affair with Edwina Currie. Family Values have been revived by the current Conservative Party under David Cameron, being a recurring theme in his speeches on social responsibility and related policies, demonstrated by his Marriage Tax allowance policy which would provide tax breaks for married couples.

Family values politics reached their apex under the social conservative administration of the Third National Government (1975–84), widely criticised for its populist and social conservative views about abortion and homosexuality. Under the Fourth Labour Government (1984–90), homosexuality was decriminalised and abortion access became easier to obtain.

In the early 1990s, New Zealand reformed its electoral system, replacing the first-past-the-post electoral system with the Mixed Member Proportional system. This provided a particular impetus to the formation of separatist conservative Christian political parties, disgruntled at the Fourth National Government (1990–99), which seemed to embrace bipartisan social liberalism to offset Labour's earlier appeal to social liberal voters. Such parties tried to recruit conservative Christian voters to blunt social liberal legislative reforms, but had meagre success in doing so. During the tenure of Fifth Labour Government (1999–2008), prostitution law reform (2003), same-sex civil unions (2005) and the repeal of laws that permitted parental corporal punishment of children (2007) became law.

At present, Family First New Zealand, a 'non-partisan' social conservative lobby group, operates to try to forestall further legislative reforms such as same-sex marriage and same-sex adoption. In 2005, conservative Christians tried to pre-emptively ban same-sex marriage in New Zealand through alterations to the New Zealand Bill of Rights Act 1990, but the bill failed 47 votes to 73 at its first reading. At most, the only durable success such organisations can claim in New Zealand is the continuing criminality of cannabis possession and use under New Zealand's Misuse of Drugs Act 1975.

Federal law of Russian Federation no. 436-FZ of 2010-12-23 "On Protecting Children from Information Harmful to Their Health and Development" lists information "negating family values and forming disrespect to parents and/or other family members" as information not suitable for children (“18+” rating) [6] It does not contain any separate definition of family values.

The use of family values as a political term dates back to 1976, when it appeared in the Republican Party platform.[8] The phrase became more widespread after Vice President Dan Quayle used it in a speech at the 1992 Republican National Convention. Quayle had also launched a national controversy when he criticized the television program Murphy Brown for a story line that depicted the title character becoming a single mother by choice, citing it as an example of how popular culture contributes to a "poverty of values", and saying: "[i]t doesn't help matters when primetime TV has Murphy Brown—a character who supposedly epitomizes today's intelligent, highly paid, professional woman—mocking the importance of fathers, by bearing a child alone, and calling it just another 'lifestyle choice'". Quayle's remarks initiated widespread controversy, and have had a continuing effect on U.S. politics.[citation needed] Stephanie Coontz, a professor of family history and the author of several books and essays about the history of marriage, says that this brief remark by Quayle about Murphy Brown "kicked off more than a decade of outcries against the 'collapse of the family'".[9]

The media in the United States, the Christian right often promotes the term family values to refer to their version of Familialism.[10][11][12]

The survey noted that 93% of all women thought that society should value all types of families (Harris did not publish the responses for men).[13]

Social and religious conservatives often use the term "family values" to promote conservative ideology that supports traditional morality or Christian values.[19] Some American conservative Christians see their religion as the source of morality and consider the nuclear family an essential element in society. For example, "The American Family Association exists to motivate and equip citizens to change the culture to reflect Biblical truth and traditional family values."[20] Such groups[which?] variously oppose abortion, pornography, pre-marital sex, polygamy, homosexuality, certain aspects of feminism, cohabitation, separation of church and state, legalization of recreational drugs, and depictions of sexuality in the media.[21]

Although the term "family values" remains a core issue for the Republican Party, in recent years[when?] the Democratic Party has also used the term, though differing in its definition. For example, in his acceptance speech at the 2004 Democratic National Convention, John Kerry said "it is time for those who talk about family values to start valuing families".[22]

The Democratic Party definitions of family values often[quantify] include items that specifically target working families, such as support for:[citation needed]

Other liberals have used the phrase to support such values as family planning, affordable child-care, and maternity leave.[23] For example, groups such as People For the American Way, Planned Parenthood, and Parents and Friends of Lesbians and Gays have attempted to define the concept in a way that promotes the acceptance of single-parent families, same-sex monogamous relationships and marriage. This understanding of family values does not promote conservative morality, instead focusing on encouraging and supporting alternative family structures, access to contraception and abortion, increasing the minimum wage, sex education, childcare, and parent-friendly employment laws, which provide for maternity leave and leave for medical emergencies involving children.[24]

While conservative sexual ethics focus on preventing premarital or non-procreative sex, liberal sexual ethics are typically[quantify] directed rather towards consent, regardless of whether or not the partners are married.[25][26][27] 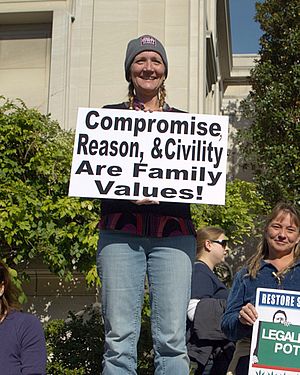 Population studies have found that in 2004 and 2008, liberal-voting ("blue") states have lower rates of divorce and teenage pregnancy than conservative-voting ("red") states. June Carbone, author of Red Families vs. Blue Families, opines that the driving factor is that people in liberal states tend to wait longer before getting married.[28]