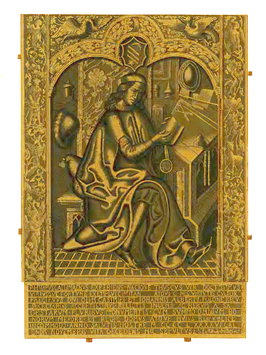 Filippo Buonaccorsi was born in San Gimignano, in Tuscany, in north-central Italy. He first appeared in Venice and Rome, where he was secretary to Bishop Bartolomeo Roverella. He moved to Rome in 1462 and became a member of the Rome Academy of Julius Pomponius Laetus.

In 1468 he took part in a supposed assassination attempt upon Pope Paul II and fled to Poland. In Poland he found work with the Bishop of Lwów, Gregory of Sanok.

Pomponius implied he was homosexual and referred to his "perverted habits". The homo-erotic verses (including one addressed to the then Bishop of Segni , Lucio Fazini) which were found in his papers, while earning him a reputation as a sodomite, seem to have been restricted to his youth. And this seems to have reflected the aims of the Rome Academy to revive the concept of homosexual love as the ideal, drawing on the precedents set by antiquity. But Buonaccorsi seems to have been particularly active within the group in writing about sexual infatuation between men. However, later once in Poland he seems to have turned his attention to heterosexual love instead; perhaps a cautious reaction to the violent events in Rome.[1]

Buonaccorsi later became tutor to the sons of Polish King Casimir IV Jagiellon and took part in diplomatic missions. In 1474 he was named royal secretary, in 1476 he served as ambassador to Constantinople, and in 1486 he became the King's representative in Venice. With the accession to the Polish throne of Buonaccorsi's former pupil as John I of Poland, his influence peaked.

In his writings Buonaccorsi argued for the strengthening of the king's power at the expense of the aristocracy. In Kraków he joined Conrad Celtis' Sodalitas Vistuliana.

Callimachus wrote poems and prose in Latin, and is best remembered for his biographies of Bishop Zbigniew Oleśnicki, Bishop Gregory of Sanok, and King Władysław III of Poland.

His tomb in Kraków's Dominican Church was created by Veit Stoss.[citation needed]