Finley Peter Dunne (July 10, 1867 — April 24, 1936) was an American humorist and writer from Chicago. In 1898 Dunne published Mr. Dooley in Peace and War, a collection of his nationally syndicated Mr. Dooley sketches.[1] Speaking with the thick verbiage and accent of an Irish immigrant from County Roscommon, the fictional Mr. Dooley expounded upon political and social issues of the day from his South Side Chicago Irish pub.[2] Dunne's sly humor and political acumen won the support of President Theodore Roosevelt, a frequent target of Mr. Dooley's barbs.[3] Dunne's sketches became so popular and such a litmus test of public opinion that they were read each week at White House cabinet meetings.[4]

Dunne was born in Chicago on July 10, 1867, was educated in the Chicago public schools (graduating from high school last in his class), and, at age 17, in 1884, began his newspaper career as a reporter/editor for the Chicago Telegram.[5] He was then with the Chicago News from 1884–88, the Chicago Times in 1888, the Chicago Tribune in 1889, the Chicago Herald in 1889, and the Chicago Journal in 1897. Originally named Peter Dunne, to honor his mother, who had died when he was in high school, he took her family name as his middle name some time before 1886, going by PF Dunne, reversed the two names in 1888, for Finley P. Dunne, and later used simply the initials, FP Dunne.[6] His sister, Amelia Dunne Hookway, was a prominent educator and high school principal in Chicago; the former Hookway School was named in her honor. 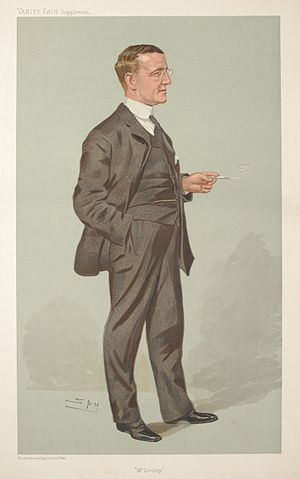 The first Dooley articles appeared when Dunne was chief editorial writer for the Chicago Post and for a number of years he wrote the pieces without a byline or initials. They were paid for at the rate of $10 each above his newspaper pay. A contemporary wrote of his Mr. Dooley sketches that "there was no reaching for brilliancy, no attempt at polish. The purpose was simply to amuse. But it was this very ease and informality of the articles that caught the popular fancy. The spontaneity was so genuine; the timeliness was so obvious."[7] In 1898, he wrote a Dooley piece that celebrated the victory of Commodore George Dewey over the Spanish fleet in Manila Bay—and this piece attracted national attention. Within a short time, weekly Dooley essays were syndicated across the country.[8]

In 1899, under the title Mr Dooley in Peace and War, a collection of the pieces was brought out in book form, received rave reviews from the critics, and was on the best seller list for a year. Dunne moved to New York as a full-time writer and national literary figure.

Selections from Dooley were read at meetings of the presidential cabinet. Theodore Roosevelt was a fan, despite the fact that he was one of Dunne's favorite targets. When Roosevelt published his book, The Rough Riders, Dunne wrote a tongue-in-cheek review mocking the war hero with the punchline "if I was him I'd call th' book 'Alone in Cubia'" and the nation roared.[9] Roosevelt wrote to Dunne: "I regret to state that my family and intimate friends are delighted with your review of my book. Now I think you owe me one; and I shall expect that when you next come east you pay me a visit. I have long wanted the chance of making your acquaintance."

The two finally met at the Republican Convention in 1900, where Roosevelt gave him a news scoop—he would accept the nomination as vice presidential candidate. In later years, Dunne was a frequent guest for dinner and weekends at the White House.

Dunne wrote more than 700 Dooley pieces, about a third of which were printed in eight books. Their era of influence ended with the start of World War I. After Dooley became popular, Dunne left Chicago and lived in New York, where he wrote books and articles and edited The American Magazine, Metropolitan Magazine and Collier's Weekly, becoming a beloved figure in club and literary circles.

Dunne's "Dooley" essays were based on realistic depictions of working-class life, and did not reflect the idealism of most political commentators of the Progressive Era. Fanning says:

Dunne did not share the faith ... in progressive reform. He viewed the world as fallen and essentially unimprovable, and many Dooley pieces reflect their author's tendency toward fatalism.[10]

On December 10, 1902, Dunne married Margaret Ives Abbott (1876-1955), a society woman in Chicago and prominent golfer. She continued to play golf while she and Dunne were raising their four children, Finley Peter Dunne, Jr., screenwriter/director Philip Dunne, and twins Peggy and Leonard.

Dunne's historical significance was apparent at the time of his death. Elmer Ellis, historian at (and later president of) the University of Missouri, wrote a biography of Dunne published in 1941.[11]

He coined numerous political quips over the years; one of the best-known aphorisms he originated is "politics ain't beanbag", referring to the rough side of political campaigns.[12]

As a journalist in the age of "muckraking journalism", Dunne was aware of the power of institutions, including his own. Writing as Dooley, Dunne once wrote the following passage mocking hypocrisy and self-importance in the newspapers themselves:

The expression has been borrowed and altered in many ways over the years:

According to an article in the November 5, 2006 edition of the New York Times, he coined the truism, often wrongly attributed to Tip O'Neill, that "all politics is local."