Fort Pillow State Park is a state park in western Tennessee that preserves the American Civil War site of the Battle of Fort Pillow. The 1,642 acre (6.6 km²) Fort Pillow, located in Lauderdale County on the Chickasaw Bluffs overlooking the Mississippi River, is rich in both historic and archaeological significance.

In 1861, the Confederate army built extensive fortifications here and named the site for General Gideon Johnson Pillow of Maury County. 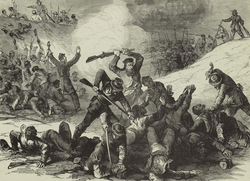 An engraving of Confederate troops massacring black Union soldiers after the Battle of Fort Pillow.

Because of its strategic location, controlling traffic on the Mississippi River, the fort was attacked and captured by the Union Army, which controlled it during most of the war. June 4, 1862 – American Civil War: Confederate troops evacuated Fort Pillow on the Mississippi River, leaving the way clear for Union troops to take Memphis, Tennessee. An exception to this control occurred for less than one day immediately after the Battle of Fort Pillow in 1864.

The Confederate victory at the Battle of Fort Pillow (April 1864) resulted in the killing of 229 of the 262 black Union soldiers engaged in the battle.[3] The white soldiers numbered 285. An examination of regimental records showed that "less than 36 percent of the men from white units died in battle or of wounds, while the death toll for black units was 66 percent."[4]

This slaughter by the Confederate troops under Gen. Nathan Bedford Forrest has been labeled a massacre; Confederate apologists debate the fatality numbers. A Confederate wrote in a letter home that "Forrest ordered them [negroes] shot down like dogs, and the carnage continued."[5] In addition to regimental records, contemporary accounts by troops on both sides, as well as journalist, describe it as appalling slaughter.[6] Within about three weeks, as political controversy grew, Confederates began to debate accounts of a massacre.[7]

"Remember Fort Pillow!" became a battle cry among black Union soldiers for the remainder of the Civil War.

While the Union casualty count for the battle does not indicate that the Confederate forces took many prisoners, Confederate records show about 200 prisoners were shipped south.

The park has an interpretive center and museum (open 8 a.m. – 4 p.m. daily, except for certain holidays). Tours of the museum and restored fortifications are available upon request. The park also offers many recreational activities, including camping, picnicking and fishing.