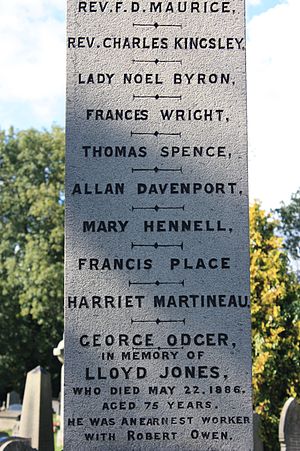 Frances Wright (September 6, 1795 – December 13, 1852) also widely known as Fanny Wright, was a Scottish-born lecturer, writer, freethinker, feminist, abolitionist, and social reformer, who became a U. S. citizen in 1825. That year she founded the Nashoba Commune in Tennessee as a utopian community to prepare slaves for emancipation, intending to create an egalitarian place, but it lasted only three years. Her Views of Society and Manners in America (1821) brought her the most attention as a critique of the new nation.

Frances Wright was one of three children born in Dundee, Scotland, to Camilla Campbell and James Wright, a wealthy linen manufacturer and political radical. Her father designed Dundee trade tokens, knew Adam Smith and corresponded with French republicans, including Gilbert du Motier, marquis de Lafayette. Both parents died young, and Fanny (as she was called as a child) was orphaned at the age of three, but left with a substantial inheritance. Her maternal aunt became her guardian and took Fanny to her home in England. Her guardian taught her ideas founded on the philosophy of the French materialists.[1]

Upon her coming of age at 16, Fanny returned to Scotland, where she lived with her great-uncle James Mylne,[2] and spent her winters in study and writing and her summers visiting the Scottish Highlands. By the age of 18, she had written her first book. 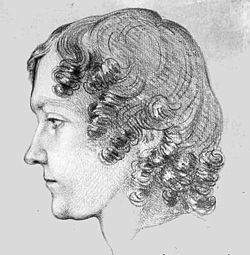 Wright travelled to the United States in 1818 at the age of 23, and with her younger sister toured the country for two years before returning to Scotland. She believed in universal equality in education, and feminism. She attacked organized religion, greed, and capitalism. Along with Robert Owen, Wright demanded that the government offer free boarding schools. She was a fighter for the emancipation of slaves and for birth control and sexual freedom for women.[3][4] She wanted free public education for all children over two years of age in state-supported boarding schools.[5] She expressed through her projects in America what the utopian socialist Charles Fourier had said in France, "that the progress of civilization depended on the progress of women."[6] 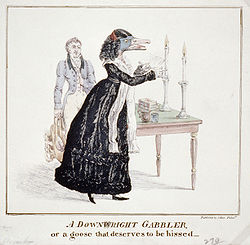 A hostile cartoon lampooning Wright for daring to deliver a series of lectures in 1829, at a time when many felt that public speaking was not an appropriate activity for women.

Wright was the co-founder of the Free Inquirer newspaper. She wrote Views of Society and Manners in America (1821) and A Few Days in Athens (a defense of the philosophy of Epicurus).[1] Her publication of Views of Society and Manners in America was a major turning point, as it brought her new acquaintances, and led to her return to the United States, where she became established as a social reformer. It is a significant example of the Eighteenth-century humanitarian outlook confronting the new democratic world. It was translated into several languages and widely read in Great Britain, the United States and Europe.

In 1824 and 1825, Wright again visited the United States, accompanying the Marquis de Lafayette during much of his famous tour of the United States.[7] As Lafayette headed South in February, Wright headed west towards Robert Owen and the community he had established at New Harmony, Indiana. They met up again in New Orleans in April 1825, and travelled north along the Mississippi River.[8]

In the fall of 1825, Wright returned to Memphis[9] and founded the Nashoba Commune near Memphis, Tennessee, where she planned to educate slaves to prepare them for freedom.[10][11][12] Wright hoped to build a self-sustaining multi-racial community composed of slaves, free blacks, and whites.[13][14] Nashoba was partially based on Owen's New Harmony settlement, where Wright spent a significant amount of time.[15] Nashoba lasted about three years until Wright became ill with malaria and moved back to Europe to recover. The interim managers of Nashoba took a more strict approach in terms of work requirements. In addition, they were worried about rumors of inter-racial marriage, which damaged financial support for the community. By Wright's return in 1828, the community had collapsed financially. In 1830, Wright freed the Commune's 30 slaves and arranged for their transport, accompanying them to Haiti, which had achieved independence in 1804.[16] There they could live their lives as free men and women.[17] After the closing of Nashoba, Wright wrote an explanation and defense of the commune and the principles of “human liberty and equality.”[18] The modern-day city of Germantown, Tennessee, a suburb of Memphis, is located on the land of Nashoba.[19]

Wright's opposition to slavery contrasted with the views of many other Democrats of the era, especially those of the South. At the same time, her activism on behalf of workingmen distanced her from the leading abolitionists of the day.[20] In 1833–36, her lectures upon slavery and other social institutions attracted large and enthusiastic audiences, and led to the establishment of what were called "Fanny Wright" societies. Her visits were subsequently extended to the principal cities of the United States, but the enunciation of views similar to those contained in her Few Days in Athens met with very decided opposition.[1]

Around 1838,[1] Wright married a French physician, Guillayme D'Arusmont, with whom she had one child: Frances Silva D'Arusmont. The daughter married William Eugene Guthrie, a member of an old established Forfarshire family in Scotland. Wright and D'Arusmont later divorced.

As an activist in the American Popular Health Movement between 1830 and 1840, Wright advocated for women being involved in health and medicine. In 1836 she published her last book, Course of Popular Lectures.

After the mid-term political campaign of 1838, Wright suffered from a variety of health problems. She spent her last years in retirement at the residence of her daughter.[21] She died in 1852 in Cincinnati, Ohio, from complications resulting from a fall on an icy staircase. She is buried at the Spring Grove Cemetery in Cincinnati.[22]

Views of Society and Manners in America

Views of Society and Manners in America was one of Wright's first well known and controversial pieces. She wrote this book after her first trip to the United States as she experienced the way the slaves and blacks were being treated. The book was a report of her 1818 trip to North America. In her letters, she talks about her time as a foreigner. She opens up with greeting the reader of the letter and acknowledging herself as a foreigner. She informs the reader that as a foreigner, the things that she is about to say may be viewed differently from an American person. During her visit in North America she noticed the differences in customs. She instantly realized how The Constitution was made by men for the benefit of the men who created it. Further in her writing, she talks about she admires the American people. In her letters, she says how calm, rational, civil and well-behaved the American people are. She also points out how they do not call each other names and that organized they are. She makes a point to tell the reader how imperative it is for a foreigner to pick up the newspaper, otherwise he or she may be confused and lost in the new land. In this piece she speaks a lot about Franklin and Jefferson and their presidency. She speaks highly of them and mentions how in every person’s home there is a writing from one or both of them. So far her views of the American Society are positive. She has admired the American people and the love for their founding fathers. She respects their will to work and be social people. She notices the way that they partake in elections and that during election time, everything is noted in the newspaper to keep everyone aware. Along with elections she speaks on women’s rights and gives her views on how women should attain knowledge and be treated. Along with elections, she gives different views on religion from different travelers. She says one might think that America does not have a religion and someone else might say that the American religion is too stern and dogmatic. However, she does not long for the American religion. She makes that plain and simple. She is only analyzing the religion, not trying to conform to it. In her findings in America, she realizes that there are many different denominations of religion. She refers to them as fraternities, but in today’s terminology they are referred to as denominations. Within her journey in America, she was very open minded. She was not judgmental and recorded the various things that stood out to her. Wright wanted to help the enslaved people. So she started her journey with examining the society and the manners of the wealthy as well as the poor people. She had to come up with a master plan in order to conduct the great things she wished to do for the country. She spoke out against slavery and for women’s rights. She was an advocate for citizen health in the South and helping the less fortunate. She realized what difference between the majority and minority made not only on the country, but in the small communities as well. She was aware that the blacks were uneducated and she wanted to help educate them. In doing so, she wrote A Plan for the Gradual Abolition of Slavery in the United States Without Danger of Loss to the Citizens of the South.[citation needed]

See also An Act for the Gradual Abolition of Slavery Wright later returned to America, and this as a United States citizen she was able to give her views on more slavery and unequal rights. She wrote this treatise help get equal education for the blacks for them to become more aware of their circumstances, and how to remove their selves from slavery. She wanted this transition to be slow and peaceful. She did everything in her power to free as many slaves as possible. She purchased fifteen slaves and bought them land in Memphis Tennessee to help better their lives. In her exert he proposes an experiment. She lays out ways that with the abolishment of slavery comes more workers and more money. She wants to help end slavery and she gives slave holders a reason why it is a good idea. She uses facts and statistics and points out new views to the slave holders hoping they hear her voice. She lays out ground work and shows the slave holders how her idea and project can benefit both the slave holders and the slaves. she has realized that entire issue, in her eyes is money and this if she comes up with a way that they both make money then she will think that her plan has worked.[citation needed]

Her name is listed on the Reformers Memorial in Kensal Green Cemetery in London.

Views of Society and Manners in America. Notes from the National Humanities Center. Retrieved on November 28, 2014 from http://nationalhumanitiescenter.org/pds/livingrev/equality/text6/wright.pdf. Web.