Francesco di Giorgio Martini (baptized 23 September 1439 – 1501) was an Italian painter of the Sienese School and a sculptor, as well as being, in Nikolaus Pevsner's terms: one of the most interesting later Quattrocento architects[1] and a visionary architectural theorist; as a military engineer he executed architectural designs and sculptural projects and built almost seventy fortifications for the Federico da Montefeltro, Count (later Duke) of Urbino, for whom he was working in the 1460s, building city walls as at Iesi and early examples of star-shaped fortifications.

Born in Siena, he apprenticed as a painter with Vecchietta. In panels painted for cassoni he departed from the traditional representations of joyful wedding processions in frieze-like formulas to express visions of ideal, symmetrical, vast and all but empty urban spaces rendered in perspective. 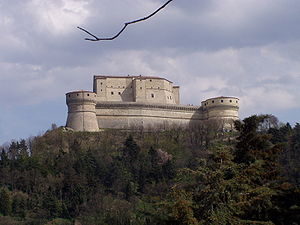 He composed an architectural treatise Trattato di architettura, ingegneria e arte militare, the third of the Quattrocento, after Leone Battista Alberti's and Filarete's; he worked on it for decades and finished sometime after 1482; it circulated in manuscript.[2][3] The projects were well in advance of completed projects at the time, but innovations, for example in staircase planning, running in flights and landings round an open center, or dividing at a landing to return symmetrically on each wall, became part of architectural vocabulary in the following century.[4] The third book is preoccupied with the "ideal" city, constrained within star-shaped polygonal geometries reminiscent of the star fort, whose wedge-shaped bastions are said[5] to have been his innovation.

Francesco di Giorgio finished his career as architect in charge of the works at the Duomo di Siena, where his bronze angels are on the high altar and some marble floor mosaics are attributed to his designs. The design of the church of San Sebastiano in Vallepiatta in Siena is also attributed to him.

Di Giorgio's painting of the "Madonna and Child with 2 Angels" is found at the Lowe Art Museum in Coral Gables, Florida.