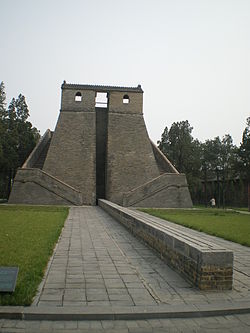 Gaocheng Astronomical Observatory. It was built in 1276.

Gaocheng Astronomical Observatory, also known as the Dengfeng Observatory, is a World Heritage Site in Duke of Zhou's shrine, Gaocheng Town, near Dengfeng in Henan province, China. This site has a long tradition of astronomical observations, from the time of the Western Zhou up to the early Yuan dynasty. There is also a gnomon used for the Da Yan calendar in 729 AD and the great observatory of the Yuan Dynasty.

It is believed that the Duke of Zhou (c. 1042 BC) had erected at this place a Ceyingtai (observatory measuring the shade or gnomon) to observe the Sun. His interest in mathematics, astronomy/astrology is reported in the Chou Pei Suan Ching.

The astronomer Yi Xing (683–727) of the Tang Dynasty built 20 standardized gnomons spread out over China to measure the equation of time dependent on the geographical location. Following a proposition of Liu Zhuo from 604 AD, 10 of these were aligned along the meridian 114° east of Greenwich from Central Asia down to Vietnam in order to determine the circumference of the Earth and derivations from a perfect sphere. One of these 10 observatories was situated at Gaocheng. The observations were used to establish the Da Yan calendar.

South of the observatory, in the temple dedicated to Zhou Gong can be found a Shigui chart made by Yi Xing. According to the Zhou Li (Rites of Zhou) this place is the center of the Earth.

It was built of stones and bricks. It has two parts: the body and shigui (also called the ruler to measure the sky). It is 9.46 meters high by itself, and 12.62 meters high if the 2 cabinets on the top are included. The somewhat unconventional gnomon is a bar mounted horizontally between the 2 cabinets. The shigui extending to the far north is 31.19 meters long and 0.53 meters wide. It is made up of 36 square stones with two parallel waterways on it to check its levelness. The location of shigui is in accordance with the direction we take today to measure the meridian. During measurement, a beam is put across the grooves. Jingfu (an instrument with many holes) on the waterways is used to measure the shade, whose precision is within 2 millimeters. At winter solstice, the length of the shadow at noon is nearly as long as the shigui.

The very precise observations served for the new Shoushi calendar (Season-Granting Calendar) of 1281, which was in use for 364 years. The length of the tropical year was determined to 365 d 5 h 49 m 20 s, a value in accord with the value of the Gregorian Calendar, but obtained 300 years earlier.

In 1787, Laplace applied these measurements to check his calculations on the secular changes of the obliquity of the ecliptic and the eccentricity of the Earth's orbit.

It is the first in a series of 27 observatories built in the early Yuan dynasty.