From Infogalactic: the planetary knowledge core
Jump to: navigation, search
For the corregimiento in Panama, see Garrote, Colón. 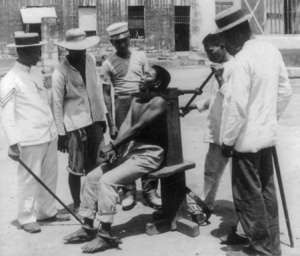 A 1901 execution at the old Bilibid Prison, Manila, Philippines

A garrote or garrote vil (a Spanish word; alternative spellings include garotte and garrotte including "garrot" and " G-knot"[1]) is a weapon, most often referring to a handheld ligature of chain, rope, scarf, wire or fishing line used to strangle a person.[2] 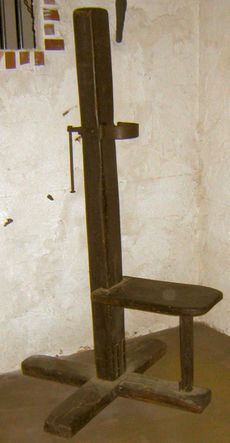 From the torture museum of Freiburg im Breisgau

A garrote can be made out of many different materials, including ropes, cable ties, fishing lines, nylon, guitar strings, telephone cord or piano wire.[2][3][4]

A stick may be used to tighten the garrote; the Spanish word actually refers to the stick itself, so it is a pars pro toto where the eponymous component may actually be absent. In Spanish, the term may also refer to a rope and stick used to constrict a limb as a torture device.[2][5]

Since World War II, the garrote has been regularly employed as a weapon by soldiers as a silent means of killing sentries and other enemy personnel.[3][4] Instruction in the use of purpose-built and improvised garrottes is included in the training of many elite military units and special forces.[4] A typical military garrote consists of two wooden handles attached to a length of flexible wire; the wire is looped over a sentry's head and pulled taut in one motion.[3][4] Soldiers of the French Foreign Legion have used a particular type of double-loop garrote (referred to as la loupe), where a double coil of rope or cord is dropped around a victim's neck and then pulled taut. Even if the victim pulls on one of the coils, he only succeeds in tightening the other.[4]

The garrote was widely employed in 17th- and 18th-century India as an assassination device, particularly by the Thuggee cult.[2] Practitioners used a yellow silk or cloth scarf called a rumāl.[2] The Indian version of the garrote frequently incorporates a knot at the center intended to aid in crushing the larynx while someone applies pressure to the victim's back, usually with a foot or knee. 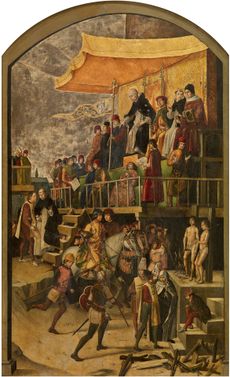 In this 15th-century depiction of the burning of Albigensians after an auto de fe, the condemned had been garroted previously. It is one of the first depictions of a garrote. Pedro Berruguete, Saint Dominic Presiding over an Auto-da-fe.

The garrote was the principal device used for capital punishment in Spain for one and a half centuries until its abolition. Originally, it entailed a mode of execution wherein a convict would be beaten to death with a club (garrote in Spanish). This later developed into a practice of strangulation by which the condemned was tied to a wooden stake with a looped section of rope placed around his neck. A wooden stick would then be placed in the loop and twisted by an executioner, causing the rope to tighten until it strangled the prisoner. As time went on, the execution method was modified in the form of a wooden chair to which the condemned was bound, while the executioner tightened a metal band around his or her neck with a crank or a wheel until asphyxiation of the condemned person was accomplished.

Other versions of this device incorporated a fixed metal blade or spike directed at the spinal cord to hasten the breaking of the neck. The spiked version, called the Catalan garrote, was used as late as 1940. American authorities kept the garrote for a time in the Philippines after that Spanish colony was captured in 1898. Its use was abolished in 1902 (Act No. 451, passed September 2, 1902). Notable victims of the garrote in the Philippines include the trio of native priests, the Gomburza, for their alleged participation in the 1872 Cavite mutiny.

American military authorities in Puerto Rico also used the garrote to execute at least five convicted murderers in 1900. In a report to Congress, the American military governor opined "that execution by the garotte is far less inhumane and revolting than execution by hanging."[6] However, use of this execution method was soon discontinued and replaced by hanging. Since 1929, capital punishment has not existed under Puerto Rican law.

In the Ottoman Empire, execution by strangulation was reserved for very high officials and members of the ruling family. Unlike the Spanish version, a bowstring was used instead of a tightening collar.[7]

The garrote (Latin: laqueus) is known to have been used in the first century BC in Rome. It is referred to in accounts of the Second Catilinian Conspiracy, where conspirators including Publius Cornelius Lentulus Sura were strangled with a laqueus in the Tullianum, and the implement is shown in some early reliefs, e.g., Répertoire de Reliefs grecs et romains, tome I, p. 341 (1919).[8] It was also used in the Middle Ages in Spain and Portugal. It was employed during the conquista of the Americas, notably in the execution of the Inca emperor Atahualpa.

During the Peninsular War of 1808–1814, French forces regularly used the garrote to execute Spanish guerrilleros, priests, and other opponents of Napoleonic rule. Around 1810 the earliest known metallic garrote appeared in Spain, and on 28 April 1828, the garrote was declared the sole method of executing civilians in that country.

In May 1897, the last public garroting in Spain was performed in Barcelona. After that, all executions were performed inside prisons. In 1935 in Spain the legislature adopted a law prohibiting any member of the armed forces from being a Freemason. As a result of this edict, 80 Freemasons were garroted in Málaga.[9][better source needed]

The last civilian executions in Spain, both by garroting, were those of Pilar Prades in May 1959 and José María Jarabo in July 1959. Recent legislation had caused many crimes (such as robbery-murder) to fall under the jurisdiction of military law; thus, prosecutors rarely requested civilian executions. Military executions were still performed in Spain until the 1970s. The garrotings of Heinz Chez (real name Georg Michael Welzel) and Salvador Puig Antich in March 1974, both convicted during Franco's dictatorship of killing police officers, were the last state-sanctioned garrotings in Spain and in the world.[citation needed]

With the 1973 Penal Code, prosecutors once again started requesting execution in civilian cases. If the death penalty had not been abolished in 1978 after dictator Francisco Franco's death, it is most likely that civilian executions would have resumed.[citation needed] The last man to be sentenced to death by garroting was José Luis Cerveto "el asesino de Pedralbes" in October 1977, for a double robbery-murder in May 1974.[citation needed] Cerveto requested execution, but his sentence was commuted. Another prisoner whose civilian death sentence was commuted was businessman Juan Ballot, for the contract killing of his wife in Navarre in November 1973.

In Spain, the death penalty was abolished after a new constitution was adopted in 1978. The writer Camilo José Cela obtained a garrote (which had probably been used for the execution of Puig Antich) from the Consejo General del Poder Judicial to display at his foundation. The device was kept in storage in Barcelona. It was displayed in the room[10][11] that the Cela Foundation devoted to his novel La familia de Pascual Duarte until Puig Antich's family asked for its removal.[12]

In 1990, Andorra became the last country to officially abolish the death penalty by garrotting, though this method had not been employed there since the late 12th century.