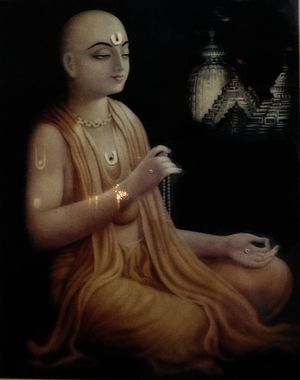 Gaudiya Vaishnavism (also known as Chaitanya Vaishnavism[1] and Hare Krishna) is a Vaishnava religious movement founded by Chaitanya Mahaprabhu (1486–1534) in India. "Gaudiya" refers to the Gauḍa region (present day Bengal/Bangladesh) with Vaishnavism meaning "the worship of Vishnu [i.e., Krishna]". Its philosophical basis is primarily that of the Bhagavad Gita and Bhagavata Purana.

The focus of Gaudiya Vaishnavism is the devotional worship (bhakti) of Radha and Krishna, and their many divine incarnations as the supreme forms of God, Svayam Bhagavan. Most popularly, this worship takes the form of singing Radha and Krishna's holy names, such as "Hare", "Krishna" and "Rama", most commonly in the form of the Hare Krishna (mantra), also known as kirtan. The movement is sometimes referred to as the Brahma-Madhva-Gaudiya sampradaya, referring to its traditional origins in the succession of spiritual masters (gurus) believed to originate from Brahma. It classifies itself as a monotheistic tradition, seeing the many forms of Vishnu [i.e., Krishna] as expansions or incarnations of the one Supreme God, adipurusha.

According to Gaudiya Vaishnava philosophy, consciousness is not a product of matter, but is instead a symptom of the soul.[2] All living beings (jivas), are distinct from their current body - the nature of the soul being eternal, immutable, and indestructible without any particular beginning or end.[3] Souls which are captivated by the illusory nature of the world (Maya) are repeatedly reborn among the various (8,400,000 in number) species of life on this planet and on other worlds in accordance to the laws of karma and individual desire. This is consistent with the concept of samsara found throughout Hindu belief.

Release from the process of samsara (known as moksha) is believed to be achievable through a variety of yoga processes. However, within Gaudiya Vaishnavism it is bhakti in its purest state (or "pure love of God") which is given as the ultimate aim, rather than liberation from the cycle of rebirth.[4]

Gaudiya Vaishnavas believe that God has many forms and names, but that the name "Krishna" is the 'fullest' description because it means "He who is all-attractive",[5] covering all of God's aspects, such as being all-powerful, supremely merciful and all-loving. God is worshiped as the eternal, all-knowing, omnipresent, all-powerful and all-attractive Supreme Person. Names of God from other religious traditions, such as Allah and Jehovah, are also accepted as bona fide titles of the same Supreme Person.[6]

One of the defining aspects of Gaudiya Vaishnavism is that Krishna is worshiped specifically as the source of all Avataric incarnations of God. This is based on quotations from the Bhagavata Purana, such as "krsnas tu bhagavan svayam", translated as "Krishna is the original Personality of Godhead"[7] and from the Bhagavad Gita where Arjuna, when speaking to Krishna, states:

"You are the Supreme Personality of Godhead, the ultimate abode, the purest, the Absolute Truth. You are the eternal, transcendental, original person, the unborn, the greatest. All the great sages such as Narada, Asita, Devala and Vyasa confirm this truth about You, and now You Yourself are declaring it to me."[8]

Krishna is described elsewhere as the "seed-giving father of all living beings"[9] and is worshiped within the Gaudiya tradition literally, as such - Krishna being the "sustaining energy of the universe".[10]

A particularly distinct part of the Gaudiya Vaishnava philosophy espoused by Chaitanya Mahaprabhu is the concept of Achintya Bheda Abheda, which translates to "inconceivable oneness and difference" in the context of the soul's relationship with Krishna,[11] and also Krishna's relationship with his other energies (i.e. the material world).[12]

In quality, the soul (jiva) is described as being identical to God, but in terms of quantity individual jivas are said to be infinitesimal in comparison to the unlimited Supreme Being. The exact nature of this relationship (being simultaneously one and different with Krishna) is inconceivable to the human mind, but can be experienced through the process of Bhakti yoga.

The practical process of devotional life is described as bhakti or bhakti-yoga. The two main elements of the bhakti-yoga process are vaidhi bhakti, which is devotional service through practice of rules and regulations (sadhana) and raganuga bhakti, which is taken as a higher stage of more spontaneous devotional service based on a selfless desire to please one's chosen Ishta-deva of Krishna or his associated expansions and avatars. Practicing vaidhi-bhakti with a view to cultivate prema creates eligibility for raganuga-sadhana.[13] Both vaidhi and raganuga bhakti are based on the chanting or singing of Krishna's names. Attainment of the raganuga stage means that rules of lifestyle are no longer important and that emotions or any material activities for Krishna should not be repressed, including sexuality. Vaidhi-bhakti's purpose is to elevate the devotee to raganuga; something which generally takes a long time.

Within his Siksastaka prayers, Chaitanya compares the process of bhakti-yoga to that of cleansing a dirty place of dust, wherein our consciousness is the object in need of purification.[14] This purification takes place largely through the chanting and singing of Radha and Krishna's names. Specifically the Hare Krishna (mantra) is chanted and sung by practitioners on a daily basis, sometimes for many hours each day. Famously within the tradition, one of Chaitanya Mahaprabhu's close associates, Haridasa Thakur, is reported to have chanted 300,000 holy names of God each day.[15]

Gaudiya Vaishnavas follow a Lacto vegetarian diet, abstaining from all types of animal flesh, including fish and eggs. Onions and garlic are also avoided as they are believed to promote a more tamasic form of consciousness in the eater when taken in large quantities.

All types of food are first offered to Krishna, and then the remnants are eaten as prasadam. This is based on a number of instructions by Krishna in the Bhagavad Gita that:

Many Gaudiya Vaishnavas will live for at least some time in their life as monks (brahmacharya). 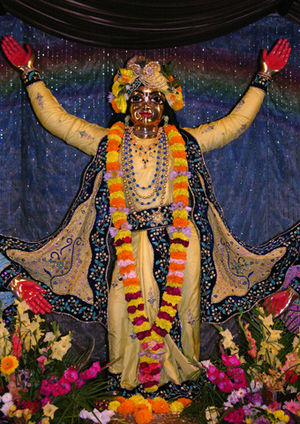 A murti of Chaitanya in ISKCON temple, Mayapur

Over the three centuries following the disappearance of Sri Chaitanya Mahaprabhu, the Gaudiya Vaishnava tradition evolved into the form in which we largely find it today in contemporary India. In the early years of the tradition, the followers of Nityananda Prabhu, Advaita Acharya and other companions of Chaitanya Mahaprabhu educated and initiated people, each in their own locales across Bengal.

Chaitanya Mahaprabhu requested a select few among his followers, who later came to be known as the Six Gosvamis of Vrindavan, to systematically present his theology of bhakti in their writings. This theology emphasized the devotee's relationship to the Divine Couple, Radha and Krishna, and looked to Caitanya as the embodiment of both Radha and Krishna. The six were Rupa Goswami, Sanatana Goswami, Gopala Bhatta Goswami, Raghunatha Bhatta Goswami, Raghunatha dasa Goswami and Jiva Goswami. In the second generation of the tradition, Narottama, Srinivasa and Shyamananda, three students of Jiva Goswami, the youngest among the six Goswamis, were instrumental in spreading the theology across Bengal and Orissa.

The festival of Kheturi (approx 1574),[18] presided over by Jahnava Thakurani, the wife of Nityananda Rama, was the first time the leaders of the various branches of Chaitanya Mahaprabhu's followers assembled together. Through such festivals, members of the loosely organized tradition became acquainted with other branches along with their respective theological and practical nuances. That notwithstanding, the tradition has maintained its plural nature, having no central authority to preside over its matters. The festival of Kheturi allowed for the systemization of Gaudiya Vaishnava theology as a distinct branch of Vaishnava theology.

In the 17th century, Vishvanath Chakravarti Thakur held great merit in clarifying core doctrinal issues over the practice of raganuga-bhakti through works such as Raga-vartma-chandrika. His student Baladeva Vidyabhushan wrote a famous commentary on the Vedanta-sutra called Govinda Bhashya.

The 18th century saw a number of luminaries headed by Siddha Jayakrishna Das Babaji of Kamyavan and Siddha Krishnadas Babaji of Govardhan. The latter, a widely renowned teacher of the mode of internal worship (raga-bhajan) practiced in the tradition, is largely responsible for the current form of devotional practice embraced by some of the traditions based in Vrindavan.

From the very beginning of Chaitanya's bhakti movement in Bengal, Haridasa Thakur and others Muslim by birth were the participants. This openness received a boost from Bhaktivinoda Thakur's broad-minded vision in the late 19th century and was institutionalized by Bhaktisiddhanta Sarasvati Thakur in his Gaudiya Matha in the 20th century.[19] 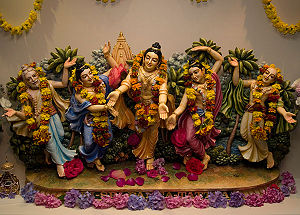 Gaudiya Matha historians assert that in the 17th–18th century, there was a period of general decline in the movement's strength and popularity characterized by decreased preaching and appearance of persons following and promoting degraded teachings and practices.[20] These groups are called apasampradayas.[21] This period was followed by a renaissance which began at the start of the 20th century. This change is believed to have happened largely due to the efforts of a particularly adept preacher known as Bhaktivinoda Thakur, who also held the position of a deputy magistrate with the British government. Bhaktivinoda Thakur's son grew up to be both an eminent scholar and highly influential Vaishnava preacher, known in his later life as Srila Bhaktisiddhanta Sarasvati Thakura. In total, Bhaktisidhanta Sarasvati Thakur founded sixty-four Gaudiya Matha monasteries in India, Burma and Europe.[22]

His disciple, Srila Prabhupada, went to the west in order to spread Gaudiya-Vaisnavism. The society he established, the International Society for Krishna Consciousness (ISKCON) still functions today and continues its preaching mission.

Gaudiya and other Vaishnava schools

Although sharing a common set of core beliefs, there are a number of philosophical differences which distinguish Gaudiya Vaishnavism from other Vaishnava schools:

"O most munificent incarnation! You are Krishna Himself appearing as Sri Krishna Caitanya Mahaprabhu. You have assumed the golden color of Srimati Radharani, and You are widely distributing pure love of Krishna. We offer our respectful obeisances unto You."[24]

Although not a widely accepted viewpoint outside of the Gaudiya tradition, Chaitanya's followers point at verses throughout the Puranic literatures as evidence to support this claim.[25][26]