The Geneva Bible is one of the most historically significant translations of the Bible into English, preceding the King James translation by 51 years.[1] It was the primary Bible of 16th century Protestantism and was the Bible used by William Shakespeare[citation needed], Oliver Cromwell, John Knox, John Donne, and John Bunyan, author of Pilgrim's Progress (1678).[2] It was one of the Bibles taken to America on the Mayflower (Pilgrim Hall Museum and Dr. Jiang have collected several bibles of Mayflower passengers). The Geneva Bible was used by many English Dissenters, and it was still respected by Oliver Cromwell's soldiers at the time of the English Civil War, in the booklet "Cromwell's Soldiers' Pocket Bible".[3]

This version of the Holy Bible is significant because, for the very first time, a mechanically printed, mass-produced Bible was made available directly to the general public which came with a variety of scriptural study guides and aids (collectively called an apparatus), which included verse citations that allow the reader to cross-reference one verse with numerous relevant verses in the rest of the Bible, introductions to each book of the Bible that acted to summarize all of the material that each book would cover, maps, tables, woodcut illustrations, indices, as well as other included features — all of which would eventually lead to the reputation of the Geneva Bible as history's very first study Bible.[citation needed]

Because the language of the Geneva Bible was more forceful and vigorous, most readers strongly preferred this version to the Great Bible. In the words of Cleland Boyd McAfee, "it drove the Great Bible off the field by sheer power of excellence".[4]

During the reign of Queen Mary I of England (1553–58), a number of Protestant scholars fled from England to Geneva, Switzerland, which was then ruled as a republic in which John Calvin and, later, Theodore Beza, provided the primary spiritual and theological leadership. Among these scholars was William Whittingham, who supervised the translation now known as the Geneva Bible, in collaboration with Myles Coverdale, Christopher Goodman, Anthony Gilby, Thomas Sampson, and William Cole; several of this group later became prominent figures in the Vestments controversy. Whittingham was directly responsible for the New Testament, which was complete and published in 1557,[5] while Gilby oversaw the Old Testament.

The first full edition of this Bible, with a further revised New Testament, appeared in 1560,[5] but it was not printed in England until 1575 (New Testament[5]) and 1576 (complete Bible[5]). Over 150 editions were issued; the last probably in 1644.[5] The very first Bible printed in Scotland was a Geneva Bible, which was first issued in 1579.[5] In fact, the involvement of Knox and Calvin in the creation of the Geneva Bible made it especially appealing in Scotland, where a law was passed in 1579 requiring every household of sufficient means to buy a copy.[6]

The annotations which are an important part of the Geneva Bible were Calvinist and Puritan in character, and as such they were disliked by the ruling pro-government Anglicans of the Church of England, as well as King James I, who commissioned the "Authorized Version", or King James Bible, in order to replace it. The Geneva Bible had also motivated the earlier production of the Bishops' Bible under Elizabeth I, for the same reason, and the later Rheims-Douai edition by the Catholic community. The Geneva Bible remained popular among Puritans and remained in widespread use until after the English Civil War. The Geneva notes were surprisingly included in a few editions of the King James version, even as late as 1715.[5]

Like most English translations of the time, the Geneva Bible was translated from scholarly editions of the Greek New Testament and the Hebrew Scriptures that comprise the Old Testament. The English rendering was substantially based on the earlier translations by William Tyndale and Myles Coverdale (more than 80 percent of the language in the Genevan Bible is from Tyndale).[7] However, the Geneva Bible was the first English version in which all of the Old Testament was translated directly from the Hebrew (cf. Coverdale Bible, Matthew Bible). 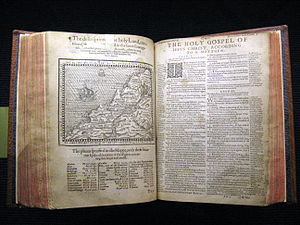 Example of the blackletter version (1608).

The Geneva Bible was the first English Bible to use verse numbers based on the work of Stephanus (Robert Estienne of Paris). It also had an elaborate system of commentary in marginal glosses. This annotation was done by Laurence Tomson, who translated (for the 1560 Geneva Bible) L'Oiseleur's notes on the Gospels, which themselves came from Camerarius. In 1576 Tomson added L'Oiseleur's notes for the Epistles, which came from Beza's Greek and Latin edition of the Bible (1565 and later). Beginning in 1599 Franciscus Junius' notes on Revelation were added, replacing the original notes deriving from John Bale and Heinrich Bullinger. Bale's The Image of both churches had a great effect on these notes as well as Foxe's Book of Martyrs. Both the Junius and Bullinger-Bale annotations are explicitly anti-Roman Catholic and representative of much popular Protestant apocalypticism during the Reformation.

The 1560 Geneva Bible was printed in Roman type—the style of type regularly used today—but many editions used the older black-letter ("Gothic") type. Of the various later English Bible translations, the next to use Roman type was the Douay-Rheims Bible of 1582 (New Testament) and 1609–10 (Old Testament).

The Geneva Bible was also issued in more convenient and affordable sizes than earlier versions. The 1560 Bible was in quarto format (218 × 139 mm type area), but pocketable octavo editions were also issued, and a few large folio editions. The New Testament was issued at various times in sizes from quarto down to 32º (the smallest, 70×39 mm type area[5]). In the late sixteenth century it is likely that the Geneva New Testament cost less than a week's wages even for the lowest-paid labourers.

The 1560 Geneva Bible contained a number of study aids, including woodcut illustrations, maps and explanatory 'tables', i.e. indexes of names and topics, in addition to the famous marginal notes. Each book was preceded by an 'argument' or introduction, and each chapter by a list of contents giving verse numbers. Smaller-format editions might be unillustrated and lack the marginal notes, but some large folio editions had additional illustrations, such as one showing Adam and Eve, where Adam wears a typical Elizabethan beard and moustache.

One interesting variation of the Geneva Bible is the so-called "Breeches Bible", the first of which appeared in 1579. In the Breeches Bible, Genesis Chapter III Verse 7 reads: "Then the eies of them both were opened, and they knew that they were naked, and they sewed figge tree leaves together, and made themselves breeches." In the King James Version of 1611, "breeches" was changed to "aprons". Geneva Bibles with the "breeches" passage continued to be printed well into the time of the King James Bible of 1611. 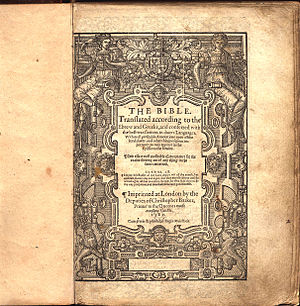 In 2006, Tolle Lege Press released a version of the 1599 Geneva Bible with modernised spelling, as part of their 1599 Geneva Bible restoration project.[8] The original cross references were retained as well as the study notes by the Protestant Reformation leaders.[8] In addition, the Early Modern English glossary was included in the updated version.[8] The advisory board of the restoration project included several Protestant Christian leaders and scholars.[8] This can also be found on BibleGateway.com.[9]

To compare the Geneva Bible with the King James, here is Revelation 6:12–17 in both versions (with spelling modernized). The differences have been italicized (in both extracts):

Here is both the Geneva and the King James versions of Genesis 3:7 with spellings as in their originals (not modernized): 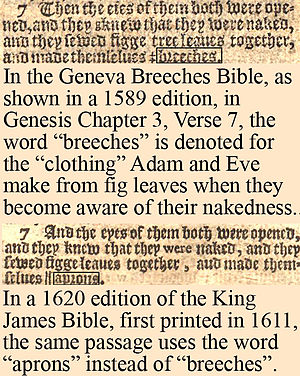 Gevena and King James Genesis Chapter 3 Verse 7
File:Genevabible.png
The title page of the 1560 edition of the Geneva Bible; the illustration depicts the Israelites before the Red Sea.

The two versions are very similar to each other. Examination of the differences shows that the earlier Geneva version is often more direct and modern in style than the later King James, e.g.

By and large, the difference is that the KJV lacked footnotes that the Geneva Bible contained. The KJV does use the serial comma.

As can be seen by the text below, Daniel chapter 4 in the Geneva Bible appears to have removed two verses. In reality, the Geneva Bible places those two verses at the end of chapter 3, as the Hebrew, Greek, and Latin verses all did. It wasn't until the King James Version that those verses were placed with chapter 4 as opposed to chapter 3:

King James I and the Geneva Bible 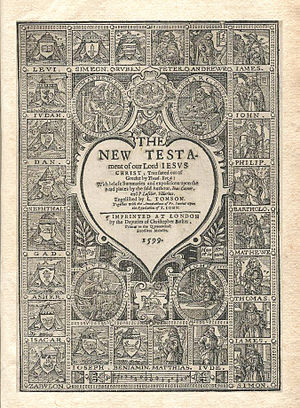 In 1604, the year after claiming the throne of England in 1603, King James I hosted and presided over a conference pertaining to matters religious, the Hampton Court Conference. While the Geneva Bible was the preferred Bible of Anglican and Puritan Protestants during the Elizabethan Age, King James I disliked the Geneva Bible and made his views clearly known at the conference: "I think that of all [English Bibles], that of Geneva is the worst." Apparently, his distaste for the Geneva Bible was not necessarily upon all the translations of the numerous passages into English, but mostly the annotations in the margins. He felt strongly many of the annotations were "very partial, untrue, seditious, and savoring too much of dangerous and traitorous conceits..." In all likelihood, he saw the Geneva's interpretations of biblical passages as anti-clerical "republicanism", which could imply church hierarchy was unnecessary. Hypothetically, it followed that the need for a king as head of church and state could be questioned also. He had been dealing with similar issues with his Presbyterian-Calvinist religious leaders back in Scotland, and he wanted none of the same controversies in England. Also, if annotations were in print, readers might believe these interpretations correct and fixed, making it more difficult to change his subjects' minds about the meanings of particular passages.

So when two Puritans towards the end of the conference suggested that a new translation of the Bible be produced to unify better the Anglican Church in England and Scotland, James embraced the idea. He could not only be rid of those inconvenient annotations, but he could have greater influence on the translation of the Bible as a whole. He commissioned and chartered a new translation of the Bible which would eventually become the most famous version of the Bible in the history of the English Language. Originally known as the Authorized Version to be read in churches, the new Bible would forever bear his name as the so-called King James Bible. The first and early editions of the King James Bible from 1611 and the first few decades thereafter lack annotations, unlike nearly all editions of the Geneva Bible up until that time. [10] Initially, the King James Version did not sell well and competed with the Geneva Bible. Shortly after the first edition of the KJV, King James banned the printing of new editions of the Geneva Bible to further entrench his version. However, Robert Barker (printer) continued to print Geneva Bibles even after the ban, placing the erroneous date 1599 on new copies of Geneva's which were actually printed circa 1616 to 1625. [11] Despite popular misconception, the Bible initially brought to North America by the Puritan Separatists or Pilgrim Fathers aboard the Mayflower in 1620 was the Geneva Bible not the King James Version.