George Augustus Eliott, 1st Baron Heathfield, PC, KB (25 December 1717 – 6 July 1790) was a British Army officer who served in three major wars during the eighteenth century. He rose to distinction during the Seven Years' War when he fought in Germany and participated in the British attacks on Belle Île (France) and Cuba. Eliott is most notable for his command of the Gibraltar garrison during the Great Siege of Gibraltar, which lasted between 1779 and 1783 during the American War of Independence. He was celebrated for his successful defence of the fortress.

Eliott was born at Wells House, near Stobs Castle, Roxburghshire, the 10th (and 8th surviving) son of Sir Gilbert Eliott, 3rd Baronet, of Stobs, by his distant cousin Eleanor Elliot of Brugh and Wells in Roxburghshire. Eleanor's brother was the soldier and courtier William Elliot of Wells. One of his Eleanor's sisters, Charlotte, had married Roger Elliott, another Governor of Gibraltar.

Eliott was educated at the University of Leiden in the Dutch Republic and studied artillery and other military subjects at the école militaire of La Fère in France. He served with the Prussian Army between 1735 and 1736.

In 1741, he joined the 2nd Troop of Horse Grenadier Guards, of which his mother's brother, William Elliot of Wells, was then Lieutenant-Colonel, and of which Eliott was afterwards Lieutenant-Colonel. He served throughout the War of Austrian Succession between 1742 and 1748, fighting at the Battle of Dettingen, where he was wounded, and the Battle of Fontenoy.[1]

Eliott served as ADC to King George II between 1756 and 1759. On 10 March 1759, he raised and was appointed colonel of the 1st Light Horse[2] (later 15th Light Dragoons, then 15th Hussars). He distinguished himself in the German campaign, particularly during the Battle of Minden in 1759 and the 1760 Battle of Emsdorf.

He was promoted to Major-General in 1759 and took part in the Capture of Belle Île in 1761. He was 2nd-in-charge at the capture of Havana during the 1762 British expedition against Cuba for which he received a significant amount of prize money. He was promoted Lieutenant-General in 1765. On 6 March 1775 he was made a Privy Counsellor.

Gibraltar and the Great Siege

On 25 May 1777 Eliott was appointed Governor of Gibraltar, taking over from the acting Governor, Robert Boyd. Eliott was promoted to General in 1778.

In July 1779, Gibraltar was besieged by the French and Spanish. By August, it was very apparent that the Spanish intended to starve the garrison. The Great Siege of Gibraltar would eventually last from 1779 to 1783. A notable letter from Eliott to the Misses Fuller survives, dated 21 September 1779 and delivered on 4 October, it said simply "Nothing new. G.A.E."

On 13 September 1782, the French and Spanish initiated a grand attack, involving 100,000 men, 48 ships and 450 cannon. Under great duress, the Garrison held its position and, by 1783, the siege was finishing. On 8 January 1783, the British Parliament sent their official thanks to Eliott and he was nominated a Knight of the Bath. By 6 February 1783, the siege was over. Eliott was invested with his honour at Gibraltar on 23 April.

A portrait from 1784, "The Siege of Gibraltar"[3] (1782) by George Carter survives in the National Portrait Gallery. 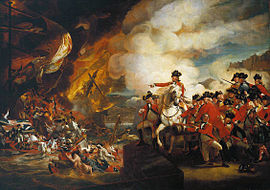 The climax of the Great Siege of Gibraltar in 1782.

A will exists dated 27 February 1788. On 19 May 1788 Eliott was formally installed as Knight of the Bath, and, in June 1788, a portrait "The Installation Supper"[6] was painted by James Gillray and resides in the National Portrait Gallery.

About this time, Eliott was making his way overland back to Gibraltar where he was still Governor. However, he became ill and stayed in the Aachen area to recuperate. During 1790, he stayed at: Grossen Hotel, Dubigk; Karlsbad (bei Herr Brammertz); Kaiserbad, Aachen (bei Herr Mohren). In June 1790 he rented the Schloss Kalkofen, Aachen (nowadays Talbotstrasse, Aachen, Germany), moved in his furniture but did not live long to enjoy the facilities.

On 6 July 1790, Eliott died at the Schloss Kalkofen, Aachen, of palsy / stroke, allegedly brought on by drinking too much of the local mineral water, and was initially buried in the grounds of the Schloss.[7] His personal estate was probated by 27 July and his furniture sold off by his heirs. In 1790, his body was disinterred and reburied at Heathfield, East Sussex. Later still, his body was again disinterred and reburied at St Andrew's Church, Buckland Monachorum, Devon in the church associated with his wife's Drake ancestry.

General Eliott has been commemorated on a Gibraltar pound banknote; his portrait has appeared since 1995 on the £10 notes issued by the Government of Gibraltar.

In August and September 1787, George's portrait was painted by Sir Joshua Reynolds and now resides in the National Gallery. His portrait was also painted by Mather Brown in 1788.[8] His marble monument and statue exist in the south transept of St Paul's Cathedral, London.[9]

There are various pubs throughout the UK that honour his name; including The General Elliott in Willoughby Waterleys, Leicestershire and in the village of South Hinksey, Oxfordshire.[10]