Alexander George Sutherland[2] (March 25, 1862 – July 18, 1942) was an English-born U.S. jurist and political figure. One of four appointments to the Supreme Court by President Warren G. Harding, he served as an Associate Justice of the U.S. Supreme Court between 1922 and 1938.

Sutherland was born in Stony Stratford, Buckinghamshire, England, to a Scottish father, Alexander George Sutherland, and an English mother, Frances, née Slater. A recent convert to The Church of Jesus Christ of Latter-day Saints (LDS Church), Alexander Sutherland moved the family to Utah Territory in the summer of 1863. Initially Alexander Sutherland settled his family in Springville, Utah, but moved to Montana and prospected for a few years before moving his family back to Utah Territory in 1869, where he pursued a number of different occupations.[3] In the 1870s the Sutherland family left Mormonism, with George remaining unbaptized.[4]

At the age of twelve, the need to help his family financially forced Sutherland to leave school and take a job, first as a clerk in a clothing store, then as an agent of the Wells Fargo Company. Yet Sutherland aspired to a higher education, and in 1879 had saved enough to attend Brigham Young Academy. There he studied under Karl G. Maeser, who proved an important influence in his intellectual development, most notably by introducing Sutherland to the ideas of Herbert Spencer, which would form an enduring part of Sutherland's philosophy. After graduating in 1881, Sutherland worked for the Rio Grande Western Railroad for a little over a year before moving to Michigan to enroll in the University of Michigan Law School, where he was a student of Thomas M. Cooley.[5]

Sutherland left school before earning his law degree. After admission to the Michigan bar, he married Rosamond Lee in 1883; their marriage proved a happy one, and produced two daughters and a son. After his marriage, Sutherland moved back to Utah Territory, where he joined his father (who had also become a lawyer) in a partnership in Provo. In 1886, they dissolved their partnership and Sutherland formed a new one with Samuel Thurman, a future chief justice of the Utah Supreme Court. After running unsuccessfully as the Liberal Party candidate for mayor of Provo, Sutherland moved to Salt Lake City in 1893. There he joined one of the state's leading law firms, and the following year was one of the organizers of the Utah State Bar Association. In 1896 he was elected as a Republican to the newly created Utah State Senate, where he served as chairman of the senate's Judiciary Committee and sponsored legislation granting powers of eminent domain to mining and irrigation companies.[6]

In 1900, Sutherland received the Republican nomination as the party's candidate for Utah's seat in the federal House of Representatives. In the subsequent election, Sutherland narrowly defeated his Democratic incumbent (and former law partner), William H. King, by 241 votes out of over 90,000 cast. He went on to serve as a Representative in the 57th Congress, where he fought to maintain the tariff on sugar and was active in both Indian affairs and legislation addressing the irrigation of arid lands.[7] 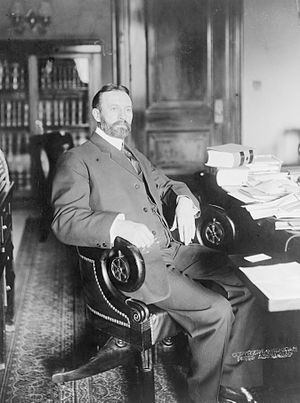 Sutherland declined to run for a second term and returned to Utah in order to campaign for election to the United States Senate. With the state legislature firmly under Republican control, the contest was an intra-party battle with the incumbent, Thomas Kearns. With the backing of Utah's other senator, Reed Smoot, Sutherland secured the unanimous support of the caucus in January 1905. Sutherland repaid his debt to Smoot in 1907 by speaking on the floor in the Senate in defense of the senior senator during the climax of the Smoot hearings.[8]

Sutherland's tenure in the Senate coincided with the Progressive Era in American politics. He voted for much of Theodore Roosevelt' s legislative program, including the Pure Food and Drug Act, the Hepburn Act, and the Federal Employers Liability Act. He was also "a longstanding women’s rights advocate. He introduced the Nineteenth Amendment into the Senate . . . campaigned for the passage of that amendment, helped draft the Equal Rights Amendment, and was a friend and adviser of Alice Paul of the National Woman's Party."[9] Yet he generally sided with the "Old Guard" of conservatives who battled with their Progressive counterparts within the party during William Howard Taft's presidency. He was also involved closely with the legal codification of the period, and joined Taft in opposing the legislation admitting New Mexico and Arizona into the union because of clauses within their constitutions allowing for the recall of judges.[10]

The election of Woodrow Wilson and the Democratic takeover of Congress in 1912 put Sutherland and the other conservatives on the defensive. By now a national figure, Sutherland opposed many of Wilson's legislative proposals and foreign policy measures. Sutherland's opposition contributed to his defeat in 1916, when he faced reelection for the first time under the terms of the Seventeenth Amendment. Once again he faced William H. King, who campaigned on Sutherland's opposition to the popular president. Following his Senate defeat, he resumed the private practice of law in Washington, D.C., and served as President of the American Bar Association from 1916 to 1917.[11] 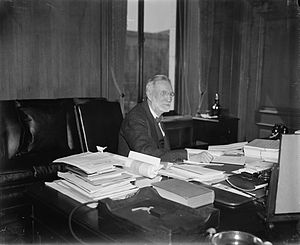 Sutherland wrote a decision refusing to declare unconstitutional a local zoning ordinance, in Village of Euclid, Ohio v. Ambler Realty Co.. The decision was widely interpreted as a general endorsement of the constitutionality of zoning laws.

During Franklin Roosevelt's early years in office as president, Justice Sutherland along with James Clark McReynolds, Pierce Butler and Willis Van Devanter, was part of the conservative Four Horsemen, who were instrumental in striking down Roosevelt's New Deal legislation. Sutherland was regarded as the leader of this conservative bloc of judges as well.[12]

Important decisions authored by Sutherland include the 1932 case Powell v. Alabama, overturning a conviction in the Scottsboro Boys Case because the defendant, Ozie Powell, was deprived of his right to counsel, and U.S. v. Curtiss-Wright Export Corp..

In United States v. Bhagat Singh Thind (1923), Sutherland authored a decision which decided that Indian Sikhs, although classified as members of the "Caucasian race," were not white within the meaning of the Naturalization Act of 1790, and thus ineligible for naturalized American citizenship.

In 1937, the Supreme Court began to side with New Deal policies and Sutherland's influence declined.[12] Sutherland retired from the U.S. Supreme Court on January 17, 1938, as the balance of power in the US Supreme Court was shifting away from him.[12] Following his retirement as a Justice, Sutherland sat by special designation as a member of the Second Circuit panel that reviewed the bribery conviction of former Second Circuit Chief Judge Martin Manton, and authored the court's opinion upholding the conviction.

While vacationing with his wife at a resort in Stockbridge, Massachusetts, Sutherland suffered a severe heart attack on the afternoon of July 17, 1942. He died in his sleep some time between 4:00 AM and 9:30 AM on July 18, his wife by his side. They had celebrated their 59th wedding anniversary just 29 days before.[13]

Sutherland was interred at Abbey Mausoleum in Arlington County, Virginia. In 1958, his remains were removed and reburied at Cedar Hill Cemetery near Suitland, Maryland.[14]

As an infant, Sutherland had been baptized in the Anglican church,[15] and his religion is often listed as Episcopalian.[16][17][18] Sutherland was never a member of the LDS Church, as his parents left Mormonism in his childhood.[4] However, he maintained loyal friendships with prominent Mormons, and fondly remembered his time at Brigham Young Academy.[19] Sutherland rejected Mormonism, specifically polygamy and "collectivist economic practices," but he had studied the religion at BYU and followed the Mormon practice of alcohol abstinence.[20] Lawyer and commentator Jay Sekulow wrote that some of Sutherland's views had been influenced by Mormonism.[21]