In law professor Brian Leiter's most recent law school ranking, Georgetown ranked within the top ten law schools in selectivity, student quality, and Supreme Court clerkship placements respectively.[12][13] Georgetown Law was ranked 5th in the 2010 Super Lawyers ranking, which measures the number of graduates from each law school who are voted Super Lawyers.[14]

Georgetown Law consistently receives the most J.D. applications of any law school in the United States.[15] 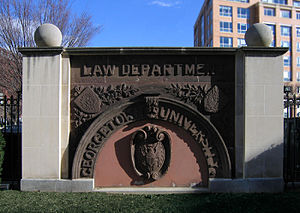 The school's original sign, preserved on the north quad of the present-day campus.

Opened as Georgetown Law School in 1870, Georgetown Law was the first law school run by a Jesuit institution within the United States. Georgetown Law has been separate from the main Georgetown campus (in the neighborhood of Georgetown) since 1890, when it moved near what is now Chinatown. The Law Center campus is located on New Jersey Avenue, several blocks north of the Capitol, and a few blocks due west of Union Station. The school added the Edward Bennett Williams Law Library in 1989 and the Gewirz Student Center in 1993, providing on-campus living for the first time. The "Campus Completion Project" finished in 2005 with the addition of the Hotung International Building and the Sport and Fitness Center.

The Georgetown Law School's original wall (or sign), is preserved on the quad of the present-day campus.

As of 2011, Georgetown Law alumni account for the second highest number of partners at NLJ 100 firms. It is among the top ten feeder schools in eight of the ten largest legal markets in the United States by law job openings (New York, Washington DC, Chicago, Los Angeles, Boston, Houston, San Francisco, and San Diego), again giving it the second-widest reach of all law schools. The school performs especially strongly in its home market, producing the greatest number of NLJ 100 partners in Washington, DC.[20]

A January 2011 New York Times article cited Georgetown Law as an example for "a number of law schools [which] hire their own graduates, some in hourly temp jobs that, as it turns out, coincide with the magical date" (February 15) for the employment statistics nine months after graduation, which forms "the most competitive category" of the U.S. News rankings and one of several that "seem open to abuse."[21] It reported that Georgetown Law had created three temporary jobs in the admissions office for students "still seeking employment", to begin on February 1 and lasting six weeks. The school denied that it had created the jobs in order to count the unemployed graduates as employed within nine months of graduation. In what the NYT called "the oddest" of several different explanations offered by the school, the Assistant Dean of Career Services Gihan Fernando (now at American University) said the school had "lost track" of two of the three alums, even though they were still working at Georgetown.[21]

The total cost of attendance (indicating the cost of tuition, fees, and living expenses) at Georgetown Law for the 2013-2014 academic year is $76,500.[22] The Law School Transparency estimated debt-financed cost of attendance for three years is $293,362.[23] 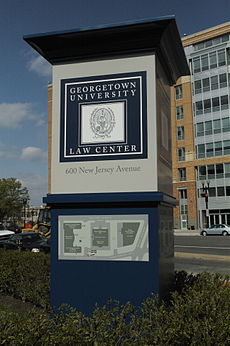 The campus consists of five buildings. Bernard P. McDonough Hall (1971, expanded in 1997) houses classrooms and Law Center offices and was designed by Edward Durell Stone. The Edward Bennett Williams Law Library building (1989) houses most of the school's library collection and is one of the largest law libraries in the United States. The Eric E. Hotung International Law Center (2004) includes two floors of library space housing the international collection, and also contains classrooms, offices, and meeting rooms. The Bernard S. and Sarah M. Gewirz Student Center (1993) provides housing mostly for 1Ls. A four-level Sport and Fitness Center (2004) includes a pool, fitness facilities, and cafe, and connects the Hotung Building to the Gewirz Student Center. 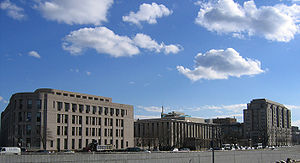 The Georgetown Law Library supports the research and educational endeavors of the students and faculty of the Georgetown University Law Center. It is the second largest law school in the United States and as one of the premier research facilities for the study of law, the Law Library houses the nation's fourth largest law library collection and offers access to thousands of online publications.

The mission of the library is to support fully the research and educational endeavors of the students and faculty of the Georgetown University Law Center, by collecting, organizing, preserving, and disseminating legal and law related information in any form, by providing effective service and instructional programs, and by utilizing electronic information systems to provide access to new information products and services.

The John Wolff International and Comparative Law Library (2004) is named after John Wolff, a long-serving member of the adjunct faculty and supporter of the Law Center's international law programs. The library is located on two floors inside the Eric E. Hotung building. It houses the international, foreign, and comparative law collections of the Georgetown University Law Center. Wolff Library collects primary and secondary law materials from Australia, Canada, France, Germany, Great Britain, Ireland, Mexico, New Zealand, Scotland, and South Africa. English translations of primary and secondary legal materials from other jurisdictions and compilations of foreign law on special topics are also included.

In addition to foreign law, the Wolff Library maintains an extensive collection of public and private international law, focusing on international trade, international environmental law, human rights, arbitration, tax and treaty law. The collection also includes documentation from many international organizations, including the International Court of Justice, the United Nations, the European Union, and the World Trade Organization. 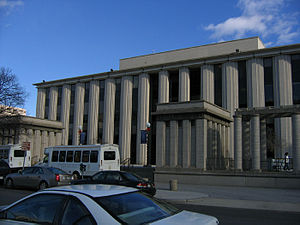 Georgetown Law's J.D. program can be completed over three years of full-time day study or four years of part-time evening study. The school offers several LL.M. programs in specific areas, most notably tax law, as well as a general LL.M. curriculum for lawyers educated outside the United States. Georgetown launched a Master of Studies in Law (M.S.L.) degree program for professional journalists in the 2007–08 academic year. It also offers the highest doctoral degree in law (J.S.D.).

Students are offered the choice of two tracks for their first year of study. "Curriculum A" is a traditional law curriculum similar to that taught at most schools, including courses in contracts, constitutional law, torts, property, criminal procedure, civil procedure, and legal research and writing. Four-fifths of the day students at Georgetown receive instruction under the standard program (sections 1, 2, 4, and 5).

Students in both curricula participate in a week-long introduction to international law between the fall and spring semesters.

Georgetown has long been nationally recognized for its leadership in the field of clinical legal education. In 2015, U.S. News ranked Georgetown's Number One in the nation for Clinical Training, followed by New York University (2nd), American University (3rd), CUNY (4th), and Yale University (5th).[24] Over 300 students typically participate in the program.

Directed by Professor Steven H. Goldblatt, the Appellate Litigation Clinic operates akin to a small appellate litigation firm. It has had four cases reach the United States Supreme Court on grants of writs of certiorari.[25] One such case was Wright v. West, 505 U.S. 277 (1992), considered in habeas corpus the question whether the de novo review standard for mixed questions of law and fact established in 1953 (the Brown v. Allen standard) should be overruled. Another was Smith v. Barry, 502 U.S. 244 (1992), which reversed a Fourth Circuit determination that the court did not have jurisdiction over an appeal because the defendant's pro se brief could not serve as a timely notice of appeal.

CALS represents refugees seeking political asylum in the United States because of threatened persecution in their home countries. Students in CALS assume primary responsibility for the representation of these refugees, whose requests for asylum have already been rejected by the U.S. government.[26]

The Center for Applied Legal Studies was founded in the 1980s by Philip Schrag.[27] Until 1995, the Clinic heard cases in the field of consumer protection. Under the direction of Schrag and Andrew Schoenholtz, the Clinic began specializing in asylum claims, for both detained and non-detained applicants.[28] In conjunction with their work for the Clinic, Schrag and Schoenholtz have written books about America's political asylum system, with the help of Clinic fellows and graduate students. The duo's most recent book, Lives in the Balance was published in 2014 and provides an empirical analysis of how Homeland Security decided asylum cases over a recent fourteen-year period.[29] The group's work in human rights law has met praise from international organizations like the United Nations Human Rights Council.[30] Under the direction of Schrag and Schoenholtz, the clinic has also focused on more prolonged displacement situations for political refugees.[31]

The DC Street Law Program, Directed by Professor Richard Roe, provides legal education to the DC population through two projects: the Street Law High Schools Clinic and the Street Law Community Clinic. Roe has directed the Street Law High Schools Clinic since 1983. In the program, students introduce local high school students to the basic structure of the legal system, including the relationship among legislatures, courts, and agencies, and how citizens, especially in their world, relate to the lawmaking processes of each branch of government.[33][34] 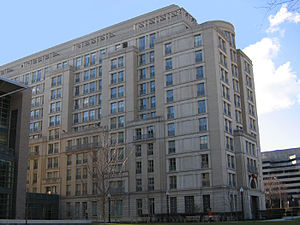 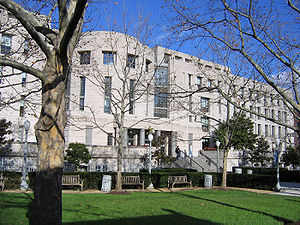 In addition, the editors and staff of the Georgetown Law Journal write and edit the Annual Review of Criminal Procedure. Most of these journals are available on both LexisNexis and Westlaw.

In 2012 and 2013, the Georgetown Law Journal was ranked by both Google Scholar and the Washington and Lee School of Law Law Library as the sixth-most influential law review in the country.[37][38]