Gonzaga University is a private Roman Catholic university located in Spokane, Washington, United States. Founded in 1887 by the Society of Jesus, it is one of 28 member institutions of the Association of Jesuit Colleges and Universities. It is named for the young Jesuit saint Aloysius Gonzaga. The campus houses 105 buildings on 152 acres (62 ha) of grassland along the Spokane River, in a residential setting one-half-mile (0.8 km) from downtown Spokane.

The university was founded by Father Joseph Cataldo, SJ, an Italian-born priest and missionary. He established the Catholic school for local Native Americans whom he served.[5]

Gonzaga campus consists of 105 buildings located on 152 acres.[6] The university is home to two large libraries. Foley Center Library is Gonzaga's main graduate and undergraduate library, opened in 1992.[7] Chastek Law Library primarily serves the Gonzaga University School of Law, erected in 2000. The Rosauer School of Education building was completed in 1994.[7]

Gonzaga is host to many unique pieces of artwork, many devoted to historical religious figures and prominent Catholics. Among the most notable are statues of St. Ignatius, St. Joseph, St. Aloysius, and alumnus Bing Crosby. The Jundt Art Center and Museum established in 1995 also features a variety of artwork from differing periods.[7] The spires of St. Aloysius Church are a landmark of the Spokane area.[7]

Due to an expanding student body, Gonzaga completed construction of a projected $60 million building that serves as the new center of campus. The John J. Hemmingson Center, the new Circulus Omnium Gonzagaorum (COG), replaced the former COG that was utilized by students for over 60 years. The three-story, 167,000-square-foot (15,500 m2) building features modern architecture and an all-glass exterior. The building was completed for the Fall 2015 semester.[8]

The university is also building the Myrtle Woldson Performing Arts Center, including a 750-seat theater.[9]

360° panorama on the campus of Gonzaga University 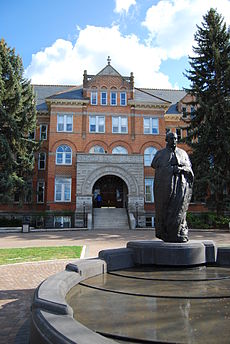 The university is divided into seven colleges or schools:

Gonzaga is ranked 4th in the U.S. News & World Report 2016 rankings of Regional Universities in the West.[16] The School of Engineering and Applied Science is the No. 22 (tied with seven other schools) best undergraduate engineering program nationwide (among engineering schools whose highest degree is a bachelor’s or master’s).[citation needed] Other U.S. News rankings include the 4th Best Value school in the west, and national rankings for the part-time Master of Business Administration program as tied for 81st best, the nursing school tied for 102nd (with the nursing-anesthesia program ranked 32nd), and the law school tied for 110th.[16] Forbes ranks Gonzaga as the 187th best private school in the country and 36th in the West.[17] Additionally, Gonzaga is listed among The Princeton Review's rankings of the best 378 colleges and in the Fiske Guide to Colleges, which ranks 336 colleges in the United States, Canada and England.[18]

Gonzaga University, whose official mascot is the Bulldog and whose players are nicknamed the Zags, is part of the NCAA Division I West Coast Conference. Gonzaga University currently offers 16 men and women varsity sports. These Intercollegiate Sports include: Baseball, Basketball, Cross Country, Golf, Rowing(‡), Soccer, Tennis, Volleyball and Track & Field (Indoor & Outdoor). Gonzaga became a household name with their "Cinderella" run in the NCAA tournament in 1999, which saw Gonzaga make it to the "Elite Eight." Gonzaga continued to build on that success, and now has one of the highest regarded basketball programs in the country. Since that historic run in 1999, Gonzaga has experienced notable success in the West Coast Conference as well as in the NCAA tournament, for which they have played in 16 consecutive years. Gonzaga's basketball feats include 15 WCC regular titles, 6 "Sweet 16's," produced 15 All Americans, a national CBS-Chevrolet Player of the Year and USBWA Oscar Robertson Trophy in Adam Morrison, and 4 NBA first round picks as of 2012.[19] Additionally, in 2013, Canadian center Kelly Olynyk, a national Player of the Year finalist, was selected as a first team All American. In the 2012-13 season, Gonzaga was ranked No. 1 by the AP for the first time in school history. Its highest ranking before reaching the pinnacle of college hoops came in 2004, when the Bulldogs were ranked No. 2. Additionally, Gonzaga, with arguably their most balanced roster in team history, advanced to the Elite 8 of the 2015 NCAA tournament, eventually losing to #1 ranked Duke.

Three of Gonzaga's most recent notable athletes are basketball players—former center Ronny Turiaf (now playing for the Minnesota Timberwolves); Robert Sacre 2012 NBA Draft (selected by the Los Angeles Lakers third overall 2006 NBA Draft pick, and Red Star Belgrade Adam Morrison (who was selected by the Charlotte Bobcats); and Courtney Vandersloot, 2011 winner of the Nancy Lieberman Award as the leading Division I women's point guard and women's Frances Pomeroy Naismith Award as the top Division I player no taller than 5'8" (1.73 m), selected third overall by the Chicago Sky in the 2011 WNBA Draft. Men's head coach Mark Few was the West Coast Conference coach of the year from 2001 to 2006, and again in 2008. Former women's head coach Kelly Graves, a six-time WCC coach of the year, led the Zags to seven consecutive WCC regular-season titles and four WCC tournament titles. The 2010–11 women's team, a No. 11 seed in that year's NCAA Tournament, became the lowest seed ever to advance to a regional final in the history of the women's tournament.

Like some other smaller colleges, Gonzaga ended its football program in the Fall of 1941, just before the U.S. entry into World War II. It produced two Pro Football Hall of Famers: Tony Canadeo (1941) of the Green Bay Packers, and Ray Flaherty (1926), head coach of the Washington Redskins. In addition, Flaherty recruited former Bulldog football stars, Ed Justice, George "Automatic" Karamatic and Max Krause to play in the Redskin backfield.

Gonzaga University offers a multitude of intramural and club sports for each season, open to all students, and over 72% of the student population participates. Through intramural sports, students compete against fellow students. Gonzaga offers various levels ranging from Competitive to Recreational. In the fall Gonzaga offers soccer, flag football, volleyball, dodgeball, 3-on-3 basketball, badminton and various tournaments. In the winter soccer, frisbee, volleyball, pickleball, bench press competition, and handball tournaments are offered. During the spring softball, spring triathlon, and home run derbies are offered.[21][22]

Gonzaga also has an Army ROTC Ranger Challenge team, which has won 15 championships in the last 16 years. It has more than once won the Douglas MacArthur Award, given annually to the best Army ROTC program in the Western United States.[23] [24]

Gonzaga Student Body Association ("GSBA") is in charge of the clubs and activities on campus.[25] Elections for its offices (e.g. President, Vice President, Senator) take place annually during the spring.[26][27]

The university requires all freshman and sophomore year students to reside on campus.

More than 20 faiths are represented on campus.[6]

The Gonzaga Bulletin is the official, weekly student newspaper of Gonzaga University. The newspaper is staffed largely by students of the journalism and broadcasting department of the university's communication arts department; it is managed by a faculty adviser and an advisory board, which reports to the university president. During the 1990s, the paper was recognized for its independence and excellence by the Society of Professional Journalists, winning Best Paper in the Inland Northwest Awards twice. The Gonzaga Bulletin is designed on the 4th floor of Gonzaga's College Hall. It is printed off-site in Spokane and transported to campus for distribution.

Spires is Gonzaga's official yearbook. It details the academic year through pictures and articles. The yearbook is distributed at the beginning of each year and is free to all students. To ensure being included in the yearbook, students have their pictures taken during opening weekend or Fall Family weekend.[28] 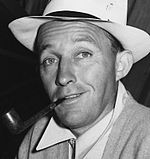