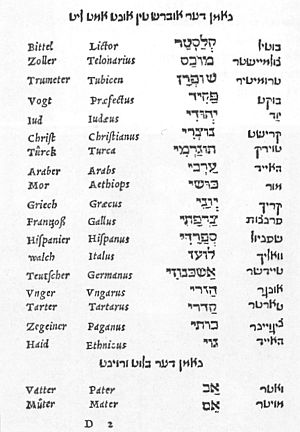 A page from Elia Levita's Yiddish-Hebrew-Latin-German dictionary (16th century) including the word goy (גוי), translated to Latin as ethnicus, meaning heathen or pagan.[1]

In modern Hebrew and Yiddish goy (/ɡɔɪ/, Hebrew: גוי‎, regular plural goyim /ˈɡɔɪ.ɪm/, גוים or גויים) is a term for a gentile, a non-Jew.[2] Through Yiddish,[3] the word has been adopted into English (often pluralised as goys) also to mean gentile, sometimes with a pejorative sense.[4][5][6]

The Biblical Hebrew word goy has been commonly translated into English as nation, meaning a group of persons of the same ethnic family who speak the same language (rather than the modern meaning of a political unit).[7][8][9][10] Nation has been used as the principal translation for goy in the Hebrew Bible, from the earliest English language bibles such as the 1611 King James Version[11] and the 1530 Tyndale Bible.[12]

The word goy means "nation" in Biblical Hebrew. In the Torah, goy and its variants appear over 550 times in reference to both the Israelites and the non-Israelite nations. The first recorded usage of goyim occurs in Genesis 10:5 and applies innocuously to non-Israelite nations. The first mention of goy in relation to the Israelites comes in Genesis 12:2, when God promises Abraham that his descendants will form a goy gadol ("great nation"). In Exodus 19:6, the Israelites are referred to as a goy kadosh, a "holy nation".[13] While the books of the Hebrew Bible often use goy to describe the Israelites, the later Jewish writings tend to apply the term to other nations.[citation needed]

Some Bible translations leave the word goyim untranslated and treat it as the proper name of a country. In Genesis 14:1, it states that the "King of Goyim" was Tidal. Bible commentaries suggest that the term may refer to Gutium. In all other cases in the Bible, goyim is the plural of goy and means "nations".[7]

One of the more poetic descriptions of the chosen people in the Hebrew Bible, and popular among Jewish scholars, as the highest description of themselves: when God proclaims in the holy writ, goy ehad b'aretz, or "a unique nation upon the earth!" (2 Samuel 7:23 and 1 Chronicles 17:21).

The rabbinic literature conceives of the nations (goyim) of the world as numbering seventy, each with a distinct language and purpose. Chaim ibn Attar[14] maintains that this is the symbolism behind the Menorah:

The seven candles of the Menorah [in the Holy Temple] correspond to the world's nations, which number seventy. Each [candle] alludes to ten [nations]. This alludes to the fact that they all shine opposite the western [candle], which corresponds to the Jewish people.[citation needed]

Evolution of the term

According to Adi Ophir and Ishay Rosen-Zvi, goy acquired the meaning of someone who is not Jewish in the first and second century. Before that time, no crystallized dichotomy between Jew and non-Jew existed in Judaism, they argue.[15]

According to the Southern Poverty Law Center, the term "goy" has been used ironically by white supremacists to refer to themselves to signal a belief in conspiracy theories about Jews.[17] For example, a Hungarian antisemitic motorcycle association refers to themselves as the Goyim riders,[18] and in 2020 one activist tried to rename the right leaning group the Proud Boys to the Proud Goys.[19] In a similar vein, in 2017, the far-right American Traditionalist Worker Party created the crowdfunding platform called GoyFundMe, a wordplay on the popular crowdfunding platform GoFundMe.[20]

The word also features in the alt-right catchphrase or meme "The Goyim Know, Shut It Down" associated with online forums such as 4chan and 8chan. In this context, the speaker assumes the role of a panicked Jew who reacts to an event that would reveal Jewish manipulations or Jewish deceitfulness. According to the Anti-Defamation League, the meme first appeared in 2013 on 4chan.[21]

Goy can be used in a derogatory manner. The Yiddish lexicographer Leo Rosten in The New Joys of Yiddish defines goy as someone who is non-Jewish or someone who is dull, insensitive, or heartless.[22] Goy also occurs in many pejorative Yiddish expressions:

Several authors have opined on whether the word is derogatory. Dan Friedman, executive director of The Forward in "What 'Goy' Means, And Why I Keep Using It" writes that it can be used as an insult but that the word is not offensive.[26] He compares it to the word "foreigners" which Americans can use dismissively but which isn't a derogatory word.[26]

Rebecca Einstein Schorr argues that the word has an established pejorative overtone. She refers to the observation "the goyishe groomsmen were all drunk and bawdy; of course, you’d never see that at a Jewish wedding" and "goyishe kop" where the word is used in a pejorative sense. She admits that the word can have non-pejorative uses, such as "goyishe restaurant" - one that doesn't serve kosher food - but contents that the word is "neutral, at best, and extremely offensive, at worst."[23] Andrew Silow Carroll writes:[24]

But the word "goy" has too much historical and linguistic baggage to be used as casually as "non-Jew" or "gentile." It starts with the obvious slurs – like "goyishe kopf," or gentile brains, which suggests (generously) a dullard, or "shikker iz a goy," a gentile is a drunkard. "Goyishe naches" describes the kinds of things that a Jew mockingly presumes only a gentile would enjoy, like hunting, sailing and eating white bread.

Nahma Nadich, deputy director of the Jewish Community Relations of Greater Boston writes: "I definitely see goy as a slur — seldom used as a compliment, and never used in the presence of a non-Jew" adding "That's a good litmus test: if you wouldn't use a word in the presence of someone you’re describing, good chance it’s offensive."[24]