Cyanobacteria, which appeared about 200 million years before the GOE,[4] began producing oxygen by photosynthesis. Before the GOE, any free oxygen they produced was chemically captured by dissolved iron or organic matter. The GOE was the point when these oxygen sinks became saturated and could not capture all of the oxygen that was produced by cyanobacterial photosynthesis. After the GOE, the excess free oxygen started to accumulate in the atmosphere.

Free oxygen is toxic to obligate anaerobic organisms, and the rising concentrations may have wiped out most of the Earth's anaerobic inhabitants at the time. Cyanobacteria were therefore responsible for one of the most significant extinction events in Earth's history. But research has shown that microbial mats of oxygen-producing microbes will produce a thin layer, one or two millimeters thick, of oxygenated water in an otherwise anoxic environment even under thick ice, and before oxygen started accumulating in the atmosphere, organisms living on these mats would already be adapted to being exposed to oxygen.[5] Additionally, the free oxygen reacted with atmospheric methane, a greenhouse gas, greatly reducing its concentration and triggering the Huronian glaciation, possibly the longest snowball Earth episode in the Earth's history.[6]

Eventually, aerobic organisms began to evolve, consuming oxygen and bringing about an equilibrium in its availability. Free oxygen has been an important constituent of the atmosphere ever since.[6]

Timeline of glaciations, shown in blue. 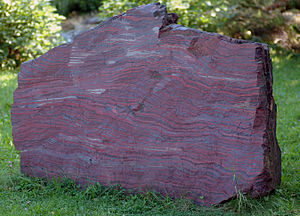 The most widely accepted chronology of the Great Oxygenation Event suggests that free oxygen was first produced by prokaryotic and then later eukaryotic organisms that carried out oxygenic photosynthesis, producing oxygen as a waste product. These organisms lived long before the GOE,[7] perhaps as early as 3,500 million years ago.

The oxygen they produced would have quickly been removed from the atmosphere by the weathering of reduced minerals, most notably iron. This 'mass rusting' led to the deposition of iron(III) oxide to form banded-iron formations such as those sediments in Minnesota and Pilbara, Western Australia.

Oxygen only began to persist in the atmosphere in small quantities shortly (~50 million years) before the start of the GOE.[8] Without a draw-down, oxygen could accumulate very rapidly.

For example, at today's rates of photosynthesis (which are much greater than those in the land-plant-free Precambrian), modern atmospheric O2 levels could be produced in around 2,000 years.[9]

Another hypothesis is that oxygen producers did not evolve until right before the major rise in atmospheric oxygen concentration.[10] This is based on interpretation of the supposed oxygen indicator, mass-independent fractionation of sulfur isotopes, used in previous studies. This hypothesis would eliminate the need to explain a lag in time between the evolution of oxyphotosynthetic microbes and the rise in free oxygen.

Either way, the oxygen did eventually accumulate in the atmosphere, with two major consequences. First, it oxidized atmospheric methane (a strong greenhouse gas) to carbon dioxide (a weaker one) and water, triggering the Huronian glaciation.

The latter may have been a full-blown, and possibly the longest ever, snowball Earth episode, lasting 300–400 million years.[10][11] Second, the increased oxygen concentrations provided a new opportunity for biological diversification, as well as tremendous changes in the nature of chemical interactions between rocks, sand, clay, and other geological substrates and the Earth's air, oceans, and other surface waters.

Despite the natural recycling of organic matter, life had remained energetically limited until the widespread availability of oxygen. This breakthrough in metabolic evolution greatly increased the free energy supply to living organisms, having a truly global environmental impact; mitochondria evolved after the GOE. With more energy available from oxygen, organisms had the means for new, more complex morphologies. These new morphologies in turn helped drive evolution through interaction between organisms.[12]

The gap between the start of oxygen production from photosynthetic organisms and the geologically rapid increase in atmospheric oxygen (about 2.5–2.4 billion years ago) may have been as long as 900 million years. Several hypotheses might explain the time lag:

The oxygen increase had to await tectonically driven changes in the Earth, including the appearance of shelf seas, where reduced organic carbon could reach the sediments and be buried.[13] The newly produced oxygen was first consumed in various chemical reactions in the oceans, primarily with iron. Evidence is found in older rocks that contain massive banded iron formations that were apparently laid down as this iron and oxygen first combined; most of the planet's commercial iron ore is in these deposits.

Chemosynthetic organisms were a source of methane, which was an important trap for molecular oxygen, because oxygen readily oxidizes methane to carbon dioxide (CO2) and water in the presence of UV radiation. Modern methanogens require nickel as an enzyme cofactor. As the Earth's crust cooled, the supply of nickel from volcanoes was reduced and less methane was produced. This allowed the oxygen concentration in the atmosphere to increase. From 2.7 to 2.4 billion years ago, the levels of nickel deposited declined steadily; it was originally 400 times today's levels.[14]

A 2006 theory, called bistability, comes from a mathematical model of the atmosphere. In this model, UV shielding decreases the rate of methane oxidation once oxygen levels are sufficient to support the formation of an ozone layer. This explanation proposes an atmospheric system with two steady states, one with lower (0.02%) atmospheric oxygen content, and the other with higher (21% or more) oxygen content. The Great Oxidation can then be understood as a switch between lower and upper stable steady states.[15]

There is a possibility that the oxygen indicator was misinterpreted. During the proposed time of the lag in the previous theory, there was change from mass-independently fractionated (MIF) sulfur to mass-dependently fractionated (MDF) sulfur in sediments. This was assumed to be a result of the appearance of oxygen in the atmosphere (since oxygen would have prevented the photolysis of sulfur dioxide, which causes MIF). This change from MIF to MDF of sulfur isotopes also may have been caused by an increase in glacial weathering, or the homogenization of the marine sulfur pool as a result of an increased thermal gradient during the Huronian glaciation period.[10]