Henry Beam Piper (March 23, 1904 – c. November 6, 1964) was an American science fiction author. He wrote many short stories and several novels. He is best known for his extensive Terro-Human Future History series of stories and a shorter series of "Paratime" alternate history tales.

He wrote under the name H. Beam Piper. Another source gives his name as "Horace Beam Piper" and a different date of death.[1] His gravestone says "Henry Beam Piper". Piper himself may have been the source of part of the confusion; he told people the H stood for Horace, encouraging the assumption that he used the initial because he disliked his name. On a copy of "Little Fuzzy" given to Charles O. Piper, Beam's cousin and executor, he wrote "To Charles from Henry."

Piper was largely self-educated; he obtained his knowledge of science and history "without subjecting myself to the ridiculous misery of four years in the uncomfortable confines of a raccoon coat." He went to work at age 18 as a laborer at the Pennsylvania Railroad's Altoona yards in Altoona, Pennsylvania. He also worked as a night watchman for the railroad.

Piper published his first short story, "Time and Time Again", in 1947 in Astounding Science Fiction; it was adapted for the radio program Dimension X and first broadcast in 1951, and was re-produced for X Minus One in 1956. He was primarily a short story author until 1961, when he made a productive, if short-lived, foray into novels. He collected guns and wrote one mystery, Murder in the Gunroom.

He killed himself in November 1964 in Williamsport, Pennsylvania, bringing his career to a premature conclusion. The exact date of his death is unknown; the last entry in his diary was dated November 5 ("Rain 0930"), and the date his body was found is reported as November 9 or November 11 by various sources. According to Jerry Pournelle's introduction to Little Fuzzy, Piper shut off all the utilities to his apartment, put painter's drop-cloths over the walls and floor, and took his own life with a handgun from his collection. In his suicide note, he gave an explanation that "I don't like to leave messes when I go away, but if I could have cleaned up any of this mess, I wouldn't be going away. H. Beam Piper'"

Some biographers attribute his act to financial problems, others to family problems; Pournelle wrote that Piper felt burdened by financial hardships in the wake of a divorce, and the mistaken perception that his career was foundering (his agent had died without notifying him of multiple sales). Editor George H. Scithers, who knew Piper socially, has stated that Piper wanted to spite the ex-wife he despised: by killing himself, Piper voided his life insurance policy, and prevented her from collecting.

An unpublished story, "Only the Arquebus", has gone missing since his suicide; it is probable that he destroyed it along with many of his personal papers.

His output was eventually purchased by Ace Science Fiction and reprinted in a set of paperbacks in the early 1980s. Many of these have since gone out of print, though his two best-known arcs were again reprinted by Ace in 1998 and 2001. Late in his career, Piper corresponded with Pournelle, who was the Ace editor who helped reprint some of his novels.

Many of his works have been reprinted recently. Many of his earlier copyrights have been allowed to lapse, permitting Project Gutenberg to distribute his work online.

Piper's stories fall into two camps: stark space opera, such as Space Viking, or stories of cultural conflict or misunderstanding, such as Little Fuzzy or the Paratime stories.

A running theme in his work is that history repeats itself; past events will have direct and clear analogues in the future. The novel Uller Uprising is the clearest example of this, being based on the Sepoy Mutiny. A similarly clear example is the very name of Space Viking; although that novel is not a direct reinterpretation of a specific historical precedent, a later theme in the book involves the takeover of a planet in a manner reminiscent of the rise of Adolf Hitler.

Piper's characterization was rooted in the notion of the self-reliant man: a man able to take care of himself and both willing and able to tackle any situation which might arise. This is perfectly exemplified in a bit of dialogue found in his short story "Oomphel in the Sky" (1960):

"He actually knows what has to be done and how to do it, and he's going right ahead and doing it, without holding a dozen conferences and round-table discussions and giving everybody a fair and equal chance to foul things up for him."

As a result, his yarns tend towards the heroic, and the conflict is usually driven externally.

Piper was interested in General Semantics. It is explicitly mentioned in Murder in the Gunroom, and its principles, such as awareness of the limitations of knowledge, are apparent in his later work.

Piper did not live to see how influential he was to other science fiction writers.

Michael McCollum's first novel, A Greater Infinity, was inspired by Piper's notion of the Paratime Police (and to a lesser extent by Isaac Asimov's The End of Eternity). The Paradox Patrol, in a series of stories by F. Gwynplaine MacIntyre published in Analog Science Fiction and Fact, are a parody of Piper's Paratime Police, although they also pay homage to Alfred Bester in their enforcement of "Bester's Law".

Robert Adams' Castaways in Time is similar in many ways to Piper's Lord Kalvan of Otherwhen. Adams' book has a group of late-1970s Americans transported to an alternate medieval England where the Roman Catholic Church controls the supply of gunpowder. Jerry Pournelle's Janissaries series is an obvious tribute to Lord Kalvan, with several early scenes being very close echoes of scenes in Piper's work. Charles Stross's Merchant Princes series explicitly acknowledges H. Beam Piper's Paratime as an influence.

Piper's story Omnilingual has been much reprinted and has been referred to in many subsequent stories dealing with the translation of alien languages.

Elizabeth Bear has stated that she often describes her novel Undertow as “Little Fuzzy meets The Italian Job”.[2]

The Terro-Human Future History is Piper's detailed account of the next 6,000 years of human history. 1942, the year the first fission reactor was constructed, is defined as the year 1 A.E. (Atomic Era). In 1973, a nuclear war devastates the planet, eventually laying the groundwork for the emergence of a Terran Federation, once humanity goes into space and develops antigravity technology.

The story "The Edge of the Knife" (collected in Empire) occurs slightly before the war, and involves a man who sees flashes of the future. It links many key elements of Piper's series.

Most of the stories take place during the next millennium, during the age of the two Federations. Most notable among these novels are the three Fuzzy novels (starting with Little Fuzzy), which concern the recognition of a peculiar alien species as sapient, and the efforts of the two species to learn to live together on the Fuzzies' home world of Zarathustra.

The Federation collapses in the System States War and following Interstellar Wars (a bit of which can be seen in The Cosmic Computer), leading to a lengthy interregnum, during which there is no central human power. Space Viking is set in this chaotic period.

The interregnum ends with the founding of the first Empire. At least five empires rule humanity during the next four thousand years, but only a handful of short stories (collected in Empire) depict this period. Piper generally portrays these empires as benign, ruled by enlightened despots.

Piper's future history resembles in some ways Isaac Asimov's Foundation Trilogy, and was probably influenced by it, especially since both authors wrote for John W. Campbell.

A much shorter series of alternate history stories is Piper's Paratime sequence, collected in Paratime, followed by the novel Lord Kalvan of Otherwhen. These stories concern the Paratime Police, a law enforcement outfit from a parallel world which has learned how to move between timelines. They jealously guard the secret, even as they mine other worlds for their resources. Notably, it appears that humans are in fact Martian refugees who escaped a calamity on their home planet and migrated to Earth.

Unlike many alternate histories, these stories tend to focus on points of divergence far back in the past. For instance, Lord Kalvan involves a police officer who is accidentally transported to a world where the ancestors of modern Europeans failed to move into Europe. Instead, the nomadic tribes migrated across Asia and into North America. The people living on the eastern coast of North America in this novel settled the area from the west, and still live in a medieval society.

Many readers point towards the short story "Genesis" (anthologized in The Worlds of H. Beam Piper) to suggest that the Terro-Human Future History universe is in fact an alternate world in the Paratime universe, where the Martians' escape from Mars resulted in their forgetting their heritage and having to start over. However, in several letters to friends and in an article published in a fan magazine, Piper himself listed the true Paratime stories, and he never identified "Genesis" as one. On the other hand, "He Walked Around The Horses" is referenced in "Police Operation" so that is a sidebar story to the series.

By the same token, in spite of Piper's lack of explicit stipulation, "Omnilingual" (1957) — which concerns a near-future scientific expedition to Mars under the aegis of an international Earth government — may also be a Paratime story. The scientists and scholars involved in this effort are found in medias res excavating the ruins of the advanced human civilization which had been gradually destroyed on the fourth planet some 50,000 years before. It should be noted that in "Omnilingual" there is no mention of the northern hemisphere's thermonuclear devastation as a result of the NATO/Communist "cold war" kindled into an orgy of extermination by the impact of an antimatter meteorite, which was detailed by Piper in his story "The Answer" (1959). Throughout the Terro-Human Future History, that conflict and the destruction wrought across the nations of the First and Second Worlds is pervasive as an explanation of the precise manner in which the home planet's culture (by way of South America, Australia, and South Africa in particular) comes to influence the planets of Piper's Federation and Empire. 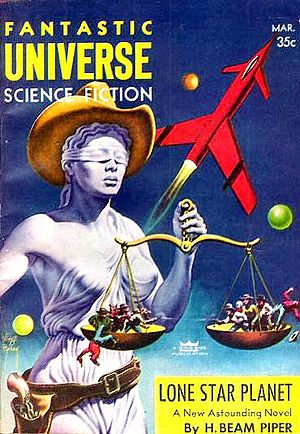 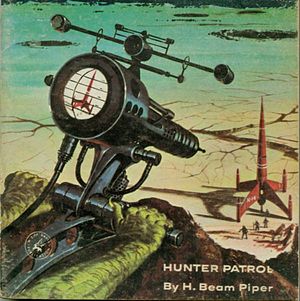 Piper's "Fuzzy" books by other authors

Piper's "Paratime" books by other authors