Hampden–Sydney College, also known as H-SC, is a liberal arts college for men located in Hampden Sydney, Virginia, United States. Founded in 1775, Hampden–Sydney is the oldest private charter college in the Southern U.S., the 10th oldest college in the U.S., the last college founded before the American Revolution, and one of only three four-year, all-men's liberal arts colleges in the United States.

Along with Wabash College and Morehouse College, Hampden–Sydney is one of only three remaining traditional all-male colleges in the United States and is noted as a highly regarded all-male institution of higher education in North America.[5] The school's mission is to "form good men and good citizens in an atmosphere of sound learning". As such, Hampden–Sydney has one of the strictest honor codes of any college or university. Upon entering as a student, each man pledges for life that he will not lie, cheat, steal, nor tolerate those who do. The pledge takes place during a ceremony in which the entering class sits in absolute silence while each man, when his name is called, comes forward and signs the pledge. This simply worded code of behavior applies to the students on and off campus. The Honor Code system is student-run, allowing for a trial of peers, adjudicated by a court of students. Students convicted of an honor offense face anywhere between 1 to 3 semesters of suspension or expulsion. Notably, a separate Code of Student Conduct covers "behavioral" infractions such as attempting to drink underage that do not rise to the level of an honor offense (which only arise if deception or theft is involved). Thus, in effect, a two-tier system of student discipline is maintained; the Code of Student Conduct (regarding policies on parking or drinking) is enforced by the Dean of Students' Office with the help of the Student Court while the Honor Code system (with more serious penalties for lying, cheating, or stealing) is maintained exclusively by the students themselves. Though grievous violation of the Code of Student Conduct may result in expulsion, it is rare that any student is expelled except by sentencing of the Honor Court.

All Hampden-Sydney students must take a three-course Western Culture sequence, which introduces them to some of the great works and historical events from Greece and Rome through present times. There are few dedicated instructors of western culture. Instead the program draws on professors from all disciplines. This program is "the bedrock of Hampden-Sydney's liberal arts program and one of the most important of its core academic requirements." [6]

Every student must prepare for and pass the Rhetoric Proficiency Exam, which consists of a three-hour essay that is graded for grammatical correctness and the coherence, quality, and style of the argument.[7] To prepare, the college requires each student to pass two rhetoric classes that are usually taken during the first two semesters. The rhetoric requirement is the same for students who decide to major in the humanities as for those who follow a course of studies in economics. After graduating, many alumni[who?] have stated that the Rhetoric Program was the most valuable aspect of the Hampden–Sydney education.[citation needed] 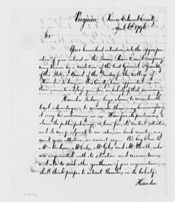 Letter from the board of Hampden–Sydney to George Washington, April 6, 1796

The college's founder and first president, Samuel Stanhope Smith, was born in Pequea, Pennsylvania. He graduated as a valedictorian from the College of New Jersey in 1769, and he went on to study theology and philosophy under John Witherspoon, whose daughter he married on 28 June 1775. In his mid-twenties, working as a missionary in Virginia, Smith persuaded the Hanover Presbytery to found a school east of the Blue Ridge, which he referred to in his advertisement of 1 September 1775 as “an Academy in Prince Edward...distinguished by the Name of HAMPDEN–SIDNEY".[8] The school, not then named, was always intended to be a college-level institution; later in the same advertisement, Smith explicitly likens its curriculum to that of the College of New Jersey (now Princeton University). “Academy” was a technical term used for college-level schools not run by the established church.[9]

As the College history indicates on its web site, "The first president, at the suggestion of Dr. John Witherspoon, the Scottish president of the College of New Jersey (now Princeton University), chose the name Hampden-Sydney to symbolize devotion to the principles of representative government and full civil and religious freedom which John Hampden (1594-1643) and Algernon Sydney (1622-1683) had outspokenly supported, and for which they had given their lives, in England's two great constitutional crises of the previous century. They were widely invoked as hero-martyrs by American colonial patriots, and their names immediately associated the College with the cause of independence championed by James Madison, Patrick Henry, and other less well-known but equally vigorous patriots who composed the College's first Board of Trustees."

"The Birthplace" (circa 1750) — outbuilding in which H–SC was founded at Slate Hill Plantation.

Classes at Hampden–Sydney began in temporary wooden structures on November 10, 1775, on the eve of American Independence, moving into its three-story brick building early in 1776. The college has been in continuous operation since that date, operating under the British, Confederate, and United States flags. In fact, classes have only been canceled five times: for a Civil War skirmish on campus, for a hurricane that knocked a tree into a dormitory building, twice due to snowstorms, and once for an outbreak of norovirus. Since the college was founded before the proclamation of the Declaration of Independence on July 4, 1776, it was eligible for an official coat of arms and armorial bearings from the College of Arms of the Royal Household of the United Kingdom. Through gifts from the F. M. Kirby Foundation, Professor John Brinkley ('59), in whose honor the "achievement of arms" was given, liaised with Mr. John Brooke-Little, then the Richmond Herald, in designing the arms for the college. The Latin text of the "letters patent" conferring the arms is dated July 4, 1976; Mr. Brooke-Little—who with the Queen's special permission appeared in full herald's uniform—made the presentation on Yorktown Day, October 19, 1976, at the college.[10]

File:Hampden-Sydney Seal.png
The College Seal. Approved by the board in 1783[11]

Despite the difficult and financially strapped first years resulting from the Revolutionary War, the college survived with sufficient viability to be granted a charter by the Virginia General Assembly in 1783—the oldest private charter in the South. Patrick Henry, then Governor of Virginia, encouraged the passage of the charter, and wrote into it an oath of allegiance to the new republic, required of all professors. 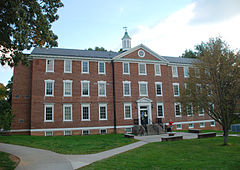 Hampden–Sydney became a thriving college while located in southside Virginia, which led to expansion. In 1812, the Union Theological Seminary was founded at Hampden–Sydney College. The seminary was later moved to Richmond, Virginia and is currently the Union Theological Seminary & Presbyterian School of Christian Education. In 1838, the medical department of Hampden–Sydney College was founded—the Medical College of Virginia, which is now the MCV Campus of Virginia Commonwealth University. During this time, the college constructed new buildings using Federal-style architecture with Georgian touches. This is the style of architecture still used on the campus.

During World War II, Hampden–Sydney College was one of 131 colleges and universities nationally that took part in the V-12 Navy College Training Program which offered students a path to a commission.[13]

The college has hosted a wide array of noteworthy musicians over the years. Bruce Springsteen, the Allman Brothers, Dave Matthews Band, Widespread Panic, Bruce Hornsby, Pretty Lights, and Government Mule are among the popular visitors to Hampden–Sydney throughout the latter half of the twentieth century.

In May 1985, then Vice President, George H. W. Bush, gave the commencement address.

Presumably under the influence of his mentor and father-in-law Witherspoon,[15] Smith named the college for two English champions of liberty, John Hampden (1594–1643) and Algernon Sydney (1622–1683). Hampden lost his life in the battle of Chalgrove Field during the English Civil War. Sydney, who wrote "Discourses Concerning Government", was beheaded by order of Charles II following his (unproven) implication in a failed attempt to overthrow the king. These proponents of religious and civil liberties were much admired by the founders of the college, all of whom were active supporters of the cause of American independence.

The College has expanded from its original small cluster of buildings on 100 acres (0.4 km²) to a campus of over 1300 acres (5.25 km²). Before 2006, the college owned 660 acres (2.7 km²). In February 2006, the college purchased 400 acres (1.6 km²) which include a lake and Slate Hill Plantation, the historic location of the college’s founding. The campus is host to numerous federal style buildings. Part of the campus has been listed on the National Register of Historic Places as a historic district.[18]

As one of only a few higher educational institutions for men, and being older than the nation in which it is located, Hampden–Sydney College has a unique culture. Students are also issued a copy of To Manner Born, To Manners Bred: A Hip-pocket Guide to Etiquette for the Hampden–Sydney Man,[19] which covers everything from basic manners, how to greet and introduce people, how to respond to invitations, how to dress, the difference between a black-tie and white-tie event, how to choose a wine, etc. The college publishes the book as a useful tool for existing successfully in a variety of social settings.[20] Tailgating is central to Hampden-Sydney's culture each fall and has been featured in Town and Country.[21]

According to the Hampden–Sydney College website, there are over 40 clubs on campus. Each club is run by the students. There are political clubs, sports clubs, religious clubs, a student-run radio station, a pep band, and multiple social fraternities. There are also volunteer groups such as Habitat for Humanity and Rotaract.

The college campus is home to a unique volunteer fire department, The Hampden–Sydney Volunteer Fire Department, which provides fire suppression service and non-transport basic life support EMS to Prince Edward County and the college, as well as assisting the town of Farmville Fire Department with fire suppression at nearly all working fires within the town limits on a regular basis. HSVFD, Company 2, is located on the south end of campus near the water tower and the physical plant. Contrary to popular belief, and despite its location and the fact that 90% of the membership comes from college faculty, staff, and students, the fire department is, in fact, not affiliated with the college.[22]

Union-Philanthropic Literary Society (UPLS) is the oldest student organization at Hampden–Sydney College. Established on September 22, 1789, it is the nation's second oldest literary and debating society still in existence today.

For freshmen, rush begins in the first semester and pledging takes place in the spring. If a student chooses not to rush and/or pledge as a freshman, sophomores and juniors may pledge in the fall or spring. Roughly 34% of the student body is involved in Greek life.[23] Beta Theta Pi used Atkinson Hall (built 1834) as a fraternity house when it came to campus in 1850 possibly making it one of the first fraternity houses in North America. Chi Psi is widely believed to have created the first fraternity house in 1845 at the University of Michigan.[24][25]

The following Greek groups were active on campus as of December 2014[update]:

The Elliott House is reserved for Honor Students who choose to live there. Although an overwhelming majority of students live on campus or in campus-owned housing, the school does permit a small number of students (usually upperclassmen) to live off-campus. In addition, some students also rent rooms in local campus homes.[citation needed]

Hampden–Sydney's rivalry with Randolph-Macon College is one of the longest-running college rivalries in the United States. "The Game" is often referred to as the oldest small-school football rivalry in the South,[34] with the first match up having been played in 1893. Athletic events involving the two schools are fiercely competitive, and the week prior to "The Game" between Hampden–Sydney and Randolph-Macon is known as "Beat Macon Week".[35]

The following is a list of the Presidents of Hampden–Sydney College from its opening in 1775 until the present.[36] 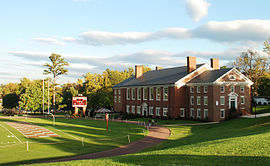