Haworth is a village in West Yorkshire, England, in the Pennines 3 miles (5 km) southwest of Keighley, 10 miles (16 km) west of Bradford and 10 miles (16 km) east of Colne in Lancashire. The surrounding areas include Oakworth and Oxenhope. Nearby villages include Cross Roads, Stanbury and Lumbfoot.

Haworth is a tourist destination known for its association with the Brontë sisters and the preserved heritage Keighley and Worth Valley Railway.

Haworth is first mentioned as a settlement in 1209.[1] The name may refer to a "hedged enclosure" or "hawthorn enclosure". The name was recorded as "Howorth" on a 1771 map.

Tourism accounts for much of the local economy, with the major attractions being the heritage railway and Brontë Parsonage Museum. In Haworth there are tea rooms, souvenir and antiquarian bookshops, restaurants, pubs and hotels including the Black Bull, where Branwell Brontë's decline into alcoholism and opium addiction allegedly began. Haworth is a base for exploring Brontë Country, while still being close to the major cities of Bradford and Leeds.

On 22 November 2002 Haworth was granted Fairtrade Village status.[3] On 21 October 2005, Haworth Fairtrade officially signed an agreement to twin with Machu Picchu in Peru.[4] 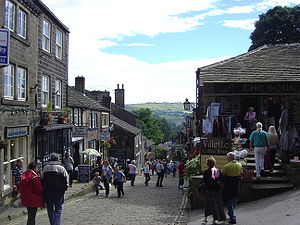 Haworth's traditional events were an annual service at Haworth Spa and the rush bearing. Spa Sunday died out in the early 20th century and the rush bearing ceremony has not been held for many years. A modern event organised by the Haworth Traders' Association is "Scroggling the Holly" which takes place in November.[5] Bands and Morris men lead a procession of children in Victorian costume following the Holly Queen up the cobblestones to a crowning ceremony on the church steps. She unlocks the church gates to invite the spirit of Christmas into Haworth. Father Christmas arrives bringing glad tidings.

The first Haworth Arts Festival took place in 2000 and was repeated in 2001, but ceased. It was revived in 2005 as a festival combining performing and visual arts and street performance.[6] The festival has community involvement and uses local professional and semi-professional musicians, artists and performers and a larger name to headline each year. It has provided a stage for John Cooper Clarke and John Shuttleworth. The festival has expanded across the Worth Valley outside Haworth and is held on the first weekend in September.

Haworth Band is one of the oldest secular musical organisations in the Keighley area.[7] History records indicate that there was a brass band at Ponden, close by in 1854 with a body of excellent performers. It was founded by John Heaton who lived at Ponden. The band played at a celebration in Haworth at the conclusion of the Crimean War. Over the years the world of brass band music went from strength to strength, during which time the Haworth Band went with it.[citation needed]

Every year the village hosts a 1940s weekend where locals and visitors don wartime attire for a host of nostalgic events.[citation needed]

From 1971 to 1988, 25 and 27 Main Street housed the Haworth Pottery where Anne Shaw produced hand-thrown domestic stoneware derived from the arts & crafts tradition. She exhibited widely in the UK and USA in public and private exhibitions and received an arts association award for her ceramic sculptures. Her husband, Robert Shaw, depicted life (and prominent residents) in the village in the 1970s and 80s, in two collections of satires, The Wrath Valley Anthology, 1981, and Grindley's Bairns,1988, praised by The Times Literary Supplement.

On 13 January 2009, it was announced that a permanent library will be established in the village, replacing the mobile service which visits the village once a week. Haworth last had its own library in 1978.[8] 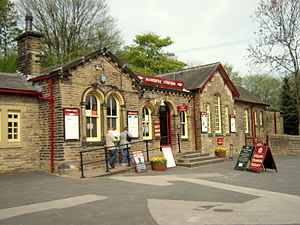 Haworth railway station is part of the Keighley and Worth Valley Railway, an authentic preserved steam railway.

The 43 miles (69 km) long Brontë Way leads past Lower Laithe Reservoir, Stanbury to the Brontë waterfalls, the Brontë Bridge and the Brontë Stone Chair in which (it is said) the sisters took turns to sit and write their first stories. It then leads out of the valley and up on the moors to Ponden Hall (reputedly Thrushcross Grange in Emily Brontë's Wuthering Heights) and Top Withens, a desolate ruin which was reputedly the setting for the farmstead Wuthering Heights. Top Withens can also be reached by a shorter walking route departing from the nearby village of Stanbury.

Haworth is served by Transdev in Keighley rural bus service which provides links to the main local town of Keighley and the local villages of Oxenhope, Stanbury, Oakworth and Denholme. There is also a service to Hebden Bridge. Evening and Sunday services are partly paid for by Metro.

Haworth Primary School on Rawdon Road is the only school in the village and takes children from age 3 to 12.[9] Children from 11 to 18 attend secondary schools outside the village at Oakbank school in Keighley and Parkside School in Cullingworth.[10]

St. Michael and All Angels Church is situated on Church Street, next to the parsonage. It is part of the Church of England Deanery of Craven.[11]

Baptists in the area met in a barn at the bottom of Brow Road in 1785. They subsequently moved to Hall Green Baptist Church at the junction of Bridgehouse Lane and Sun Street.[12]

The Brontë sisters were born in Thornton near Bradford, but wrote most of their novels while living at Haworth Parsonage when their father was the parson at the Church of St. Michael and All Angels. In the 19th century, the village and surrounding settlements were largely industrialised, which put it at odds with the popular portrayal in Wuthering Heights, which only bore resemblance to the upper moorland that Emily Brontë was accustomed to.[16] The Parsonage is now a museum owned and maintained by the Brontë Society.