Helen Cohn Schucman (July 14, 1909 – February 9, 1981) was an American clinical and research psychologist from New York City. She was a professor of medical psychology at Columbia University in New York from 1958 until her retirement in 1976. Schucman is best known for having "scribed" with the help of colleague William Thetford the book A Course in Miracles (1st edition, 1975),[1][2] the contents of which she claimed to have been given to her by an inner voice she identified as Jesus. However, as per her request, her role as its "writer" was not revealed to the general public until after her death.[3]

Schucman was born Helen Dora Cohn in 1909 to Sigmund Cohn,[4] a prosperous metallurgical chemist, and Rose Black,[5] who had married on October 18, 1896, in Manhattan. Schucman had a brother, Adolph Cohn,[6] who was almost 12 years her senior. Though her parents were both half-Jewish, they were non-observant. Schucman's mother Rose dabbled in Theosophy and various expressions of Christianity such as Christian Science and the Unity School of Christianity. However, it was the family housekeeper, Idabel,[7] a Baptist, who had the deepest religious influence on Schucman while she was growing up. In 1921, when she was 12, Schucman visited Lourdes, France, where she had a spiritual experience, and in 1922 she was baptized as a Baptist.[8] She received her B.A. from New York University (NYU), (1931–1935), where she met fellow student Louis Schucman[9] in 1932 and whom she married, in a 10-minute ceremony in a local rabbi's office, on May 26, 1933. Louis owned one or more bookstores on "Book Row" in Manhattan,[10] and during the early years of their marriage Schucman worked at his main store. Growing restless in her early forties, she returned to NYU to study psychology. She received her M.A. in 1952, followed by her Ph.D. (1952–1957).[3][11] 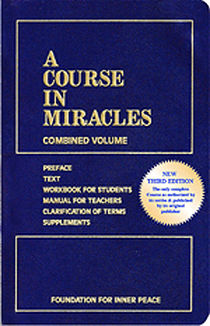 A Course in Miracles (ACIM) was "scribed" by Schucman between 1965 and 1972 through a process of inner dictation.[13] She experienced the process as one of a distinct and clear dictation from an inner voice, which earlier had identified itself to her as Jesus.[14] Her scribing of A Course in Miracles began with these words: "This is a course in miracles, please take notes."[15]

Wouter Hanegraaff[16] distinguishes Schucman's process as a type of channeling that articulates revelation, clarifying that "... in cases of inner dictation in which the medium hears a voice dictating messages, (s)he writes down [these messages] in a fully conscious state." Hanegraaff continues by specifically characterizing Schucman's case as spontaneous channeling, indicating that "...[o]ver the years the voice proved to be remarkably consistent, stopping the dictation when interrupted [by Schucman's daily activities] and continuing at the next opportunity."[17] Hanegraaff also references specific dialogue between Schucman and William Thetford citing author Robert E. Skutch,[18][19] among other authors, including Kenneth Wapnick,[20] whom Hanegraaff indicates as a "good" source for complete discussion on this subject.

During this time, Schucman worked in a collaborative venture with William Thetford in scribing A Course In Miracles (ACIM) and also with its initial edits.[15] The main transcription process took seven years, from 1965 through 1972, during which time she would take down the notes in shorthand, then each day read back these notes to Thetford, who would type them out while she read them. After all the ACIM material had been initially transcribed it was then edited for publication by Schucman and the other two primary editors, Thetford and Kenneth Wapnick.

Schucman also wrote two supplemental ACIM pamphlets[21] by the same process as well as a collection of poetry later published as The Gifts of God. Following the transcription and editing, Schucman began to reduce the level of her direct involvement in the ACIM related effort and was never as heavily involved with teaching or popularizing the material as were its editors, Bill Thetford and Kenneth Wapnick.

In 1980 Schucman was diagnosed with advanced pancreatic cancer. After a prolonged illness, she died of related complications at age 71 in 1981. Her name as the writer of ACIM was revealed only after her death, and later a collection of her poems, The Gifts of God, was published by the Foundation for Inner Peace.[3]

Absence From Felicity: The Story of Helen Schucman and Her Scribing of A Course in Miracles is the only biography of Schucman. It was written by her longtime friend Kenneth Wapnick (b 1942 - d 2013). After Schucman's death, Wapnick founded the Foundation for A Course in Miracles (FACIM), the organization that held the copyright to "A Course In Miracles." Upon Dr. Wapnick's death in 2013, the copyright to "A Course In Miracles" reverted back to The Foundation For Inner Peace FIP.