Hellenistic philosophy is the period of Western philosophy that was developed in the Hellenistic civilization following Aristotle and ending with the beginning of Neoplatonism.

Pythagoreanism is the name given to the system of philosophy and science developed by Pythagoras, which influenced nearly all the systems of Hellenistic philosophy that followed. Two schools of Pythagorean thought eventually developed, one based largely on mathematics and continuing his line of scientific work, the other focusing on his more esoteric teachings, though each shared a part of the other.

In Ancient Greece, the sophists were a category of teachers who specialized in using the tools of philosophy and rhetoric for the purpose of teaching aretê—excellence, or virtue—predominantly to young statesmen and nobility.

The Cynics were an ascetic sect of philosophers beginning with Antisthenes in the 4th century BC and continuing until the 5th century AD. They believed that one should live a life of Virtue in agreement with Nature. This meant rejecting all conventional desires for wealth, power, health, or fame, and living a life free from possessions.

The Cyrenaics were an ultra-hedonist school of philosophy founded in the 4th century BC, by Aristippus of Cyrene. They held that pleasure was the supreme good, especially immediate gratifications. The school was replaced within a century by the more moderate doctrine of Epicureanism.

Platonism is the name given to the philosophy of Plato, which was maintained and developed by his followers. The central concept was the theory of Forms: the transcendent, perfect archetypes, of which objects in the everyday world are imperfect copies. The highest form was the Form of the Good, the source of being, which could be known by reason. In the 3rd century BC, Arcesilaus adopted skepticism, which became a central tenet of the school until 90 BC when Antiochus added Stoic elements, rejecting skepticism. With the adoption of oriental mysticism in the 3rd century AD, Platonism evolved into Neoplatonism.

The Peripatetics was the name given to the philosophers who maintained and developed the philosophy of Aristotle. They advocated examination of the world to understand the ultimate foundation of things. The goal of life was the happiness which originated from virtuous actions, which consisted in keeping the mean between the two extremes of the too much and the too little.

Pyrrhonism, was a school of skepticism beginning with Pyrrho in the 3rd century BC, and further advanced by Aenesidemus in the 1st century BC. It advocated total philosophical skepticism about the world in order to attain "ataraxia" or a tranquil mind, maintaining that nothing could be proved to be true so we must suspend judgement.

Epicureanism was founded by Epicurus in the 3rd century BC. It viewed the universe as being ruled by chance, with no interference from gods. It regarded absence of pain as the greatest pleasure, and advocated a simple life. It was the main rival to Stoicism until both philosophies died out in the 3rd century AD. 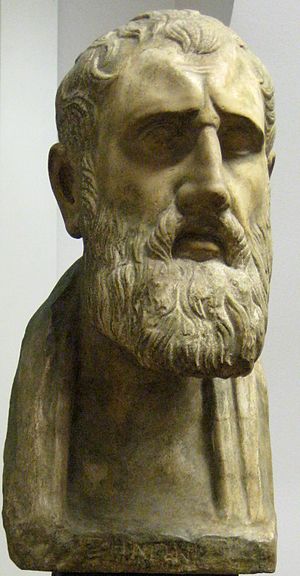 Stoicism was founded by Zeno of Citium in the 3rd century BC. Based on the ethical ideas of the Cynics, it taught that the goal of life was to live in accordance with Nature. It advocated the development of self-control and fortitude as a means of overcoming destructive emotions. It was the most successful school of philosophy until it died out in the 3rd century AD.

Eclecticism was a system of philosophy which adopted no single set of doctrines but selected from existing philosophical beliefs those doctrines that seemed most reasonable. Its most notable advocate was Cicero.

Hellenistic Judaism was an attempt to establish the Jewish religious tradition within the culture and language of Hellenism. Its principal representative was Philo of Alexandria.

Neopythagoreanism was a school of philosophy reviving Pythagorean doctrines, which was prominent in the 1st and 2nd centuries AD. It was an attempt to introduce a religious element into Greek philosophy, worshiping God by living an ascetic life, ignoring bodily pleasures and all sensuous impulses, to purify the soul.

Neoplatonism, or Plotinism, was a school of religious and mystical philosophy founded by Plotinus in the 3rd century AD and based on the teachings of Plato and the other Platonists. The summit of existence was the One or the Good, the source of all things. In virtue and meditation the soul had the power to elevate itself to attain union with the One, the true function of human beings. It was the main rival to Christianity until dying out in the 6th century.