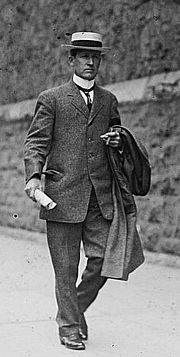 Hadley at the 1912 Republican National Convention in Chicago.

Herbert Spencer Hadley (February 20, 1872 – December 1, 1927) was an American lawyer and a Republican Party politician from St. Louis, Missouri. Born in Olathe, Kansas, he was Missouri Attorney General from 1905 to 1909 and in 1908 was elected the 32nd Governor of Missouri, serving one term from 1909 to 1913. As Attorney General, he successfully prosecuted Standard Oil Company for violating Missouri antitrust law.

Hadley was the son of Major John Milton Hadley and Harriet Beach Jones Hadley. He attended the University of Kansas, where he was a member of Phi Kappa Psi Fraternity and received an A.B. in 1892. He earned his law degree from Northwestern University with first honors in 1894. While at Northwestern, he helped establish the Northwestern University Law Review.[1] In 1901, he married Agnes Lee. Their children were John Milton, Henrietta, and Herbert Spencer.[2]

Hadley practiced law in Kansas City, Missouri. His first public office as Kansas City assistant city counselor began in 1898. He was the prosecuting attorney for Jackson County, Missouri from 1901 to 1903. In this position, Hadley developed a reputation for vigorous prosecution, including an investigation of jury tampering in the civil courts and a campaign against public gambling.[1] Although he was not re-elected as prosecuting attorney, Hadley was elected as attorney general for Missouri and served in that capacity from 1905-1909. As attorney general, he prosecuted successful cases against Standard Oil Company, railroads, several trusts, and St. Louis race track gamblers.[2]

During his term as attorney general, Hadley was the highest-ranking elected Republican official in Missouri. This, combined with Hadley's success with the Standard Oil Company suit and his record for reform, contributed to his 1908 election as governor of Missouri. His administration enacted penal reform, expanded safety and public health regulations, and established a nurse examiners' board, a fish and game commission, a game protection board, and a Missouri waterways commission. Many of Hadley's recommendations for change in other government sectors, such as revenue and public service, were not supported by the Missouri General Assembly. In 1912, Hadley served as floor leader for Theodore Roosevelt's wing of the Republican Party at the 1912 Republican National Convention.[1]

Following his gubernatorial term, Hadley resumed his law practice and worked on a federal railroad valuation project. In 1917, he moved to Colorado for health reasons and was professor of law at the University of Colorado through 1923.[2]

Hadley became the seventh Chancellor of Washington University in St. Louis in 1923. He was recruited for the position by Robert S. Brookings who helped establish the Graduate School of Economics and Government, which became part of the Brookings Institution in 1927. During his four years as chancellor, the University also founded the George Warren Brown Department of Social Work, which later became its own school within the university and one of the top-ranked social-work programs in the United States. As a law professor, he authored Rome and the World Today (Putnam, 1922).

Throughout his later years, Hadley was an advocate of legal reform and participated in reform initiatives of the American Bar Association, American Law Institute, and National Crime Commission. He was one of the authors of the Missouri Crime Survey, which recommended and successfully led to the intermediate reformatories and parole boards as part of Missouri's penal system.[1]

He died in 1927 of heart disease in St Louis, Missouri, and is buried at the Riverview Cemetery in Jefferson City, Missouri.