Herman Wouk (/ˈwoʊk/; born May 27, 1915) is an American author, whose best-selling 1951 novel The Caine Mutiny won the Pulitzer Prize for Fiction. His other works include the highly acclaimed The Winds of War and War and Remembrance, historical novels about World War II, and non-fiction such as This Is My God, a popular explanation of Judaism from a Modern Orthodox perspective, written for Jewish and non-Jewish audiences. His books have been translated into 27 languages.[1] The Washington Post called Wouk, who cherishes his privacy, “the reclusive dean of American historical novelists.”[1] Historians, novelists, publishers, and critics who gathered at the Library of Congress in 1995 to mark Wouk's 80th birthday likened him to "an American Tolstoy."[2]

Wouk's latest book, which he says will be his last,[3] is an autobiographical memoir entitled Sailor and Fiddler: Reflections of a 100-Year-Old Author, and was released in January 2016 to mark his 100th birthday.[4] [5] NPR called it "a lovely coda to the career of a man who made American literature a kinder, smarter, better place."[3]

Herman Wouk was born in The Bronx, the second of three children born to Esther (née Levine) and Abraham Isaac Wouk, Jewish emigrants from what is today Belarus. His father toiled for many years to raise the family out of poverty before opening a successful laundry service.[6]

At the age of 13, his maternal grandfather, Mendel Leib Levine, came from Minsk to live with them and took charge of his grandson's Jewish education. Frustrated by the amount of time he was expected to study the Talmud, Wouk's father told him that "if I were on my deathbed, and I had breath to say one more thing to you, I would say 'Study the Talmud.'" Eventually Wouk took this advice to heart. After a brief period as a young adult during which he lived a secular life, he returned to religious practice.[7] Judaism would become integral to both his personal life and his career.[8] He would later say that his grandfather and the United States Navy were the two most important influences on his life.[9]

After his childhood and adolescence in the Bronx and a high school diploma from the original Townsend Harris High School in Manhattan, he earned a B.A. at the age of 19 from Columbia University in 1934, where he was a member of the Pi Lambda Phi fraternity[10] and served as editor of the university's humor magazine, Columbia Jester, and wrote two of its annual variety shows.[11] Soon thereafter, he became a radio dramatist, working in David Freedman's "Joke Factory" and later with Fred Allen for five years[12] and then, in 1941, for the United States government, writing radio spots to sell war bonds.[13]

Wouk joined the U.S Navy following the attack on Pearl Harbor and served in the Pacific Theater during World War II, an experience he later characterized as educational: "I learned about machinery, I learned how men behaved under pressure, and I learned about Americans." Wouk served as an officer aboard two destroyers minesweepers (DMS), the USS Zane and USS Southard, becoming executive officer of the latter. He participated in eight invasions and won a number of battle stars.[12] During off-duty hours aboard ship he started writing a novel, Aurora Dawn, which he originally titled Aurora Dawn; or, The True history of Andrew Reale, containing a faithful account of the Great Riot, together with the complete texts of Michael Wilde's oration and Father Stanfield's sermon. Wouk sent a copy of the opening chapters to philosophy professor Irwin Edman, under whom he studied at Columbia,[14] who quoted a few pages verbatim to a New York editor. The result was a publisher's contract sent to Wouk's ship, then off the coast of Okinawa. The novel was published in 1947 and became a Book of the Month Club main selection. His second novel, City Boy, proved to be a commercial disappointment at the time of its initial publication in 1948; Wouk once claimed it was largely ignored amid the excitement over Norman Mailer's bestselling World War II novel The Naked and the Dead.[15]

While writing his next novel, Wouk read each chapter to his wife as it was completed. At one point she remarked that if they did not like this one, he had better take up another line of work (a line he would give to the character of the editor Jeannie Fry in his 1962 novel Youngblood Hawke). The novel, The Caine Mutiny (1951), went on to win the Pulitzer Prize. A best-seller, drawing from his wartime experiences aboard minesweepers during World War II, The Caine Mutiny was adapted by the author into a Broadway play called The Caine Mutiny Court Martial and, in 1954, Columbia Pictures released a film version with Humphrey Bogart portraying Lt. Commander Philip Francis Queeg, captain of the fictional USS Caine.[16]

His first novel after The Caine Mutiny was Marjorie Morningstar (1955), which earned him a Time magazine cover story. Three years later Warner Brothers made it into a movie starring Natalie Wood, Gene Kelly and Claire Trevor. His next novel, a paperback, was Slattery's Hurricane (1956), which he had written in 1948 as the basis for the screenplay for the film of the same name. Wouk's first work of non-fiction was 1959's This is My God: The Jewish Way of Life, a primer on the beliefs and practices of Orthodox Judaism.

In the 1960s he authored Youngblood Hawke (1962), a drama about the rise and fall of a young writer modeled on the life of Thomas Wolfe, and Don't Stop the Carnival (1965), a comedy about escaping mid-life crisis by moving to the Caribbean (loosely based on Wouk's own experience). Youngblood Hawke was serialized in McCall's magazine from March to July 1962. A movie version starring James Franciscus and Suzanne Pleshette, which was released by Warner Brothers in 1964. Don't Stop the Carnival was turned into a short-lived musical by Jimmy Buffett in 1997.

In the 1970s Wouk published two monumental novels, The Winds of War (1971) and its sequel, War and Remembrance (1978). He described the latter, which included a devastating depiction of the Holocaust, as "the main tale I have to tell." Both were made into popular TV miniseries, the first in 1983 and the second in 1988. Although they were made several years apart, both were directed by Dan Curtis and both starred Robert Mitchum as Captain Victor "Pug" Henry, the main character. The novels are historical fiction. Each has three layers: the story told from the viewpoints of Captain Henry and his circle of family and friends; a more or less straightforward historical account of the events of the war, and an analysis by a member of Hitler's military staff, the insightful fictional General Armin von Roon.[15] Wouk devoted "thirteen years of extraordinary research and long, arduous composition" to these two novels, noted Arnold Beichman. "The seriousness with which Wouk has dealt with the war can be seen in the prodigious amount of research, reading, travel and conferring with experts, the evidence for which is to be found in the uncatalogued boxes at Columbia University" that contain the author's papers.[17]

Wouk would spend the next several decades of his literary career writing about Jews, Israel, Judaism, and, for the first time, science.

Inside, Outside (1985) is the story of four generations of a Russian Jewish family and its travails in Russia, the U.S. and Israel. The Hope (1993) and its sequel, The Glory (1994), are historical novels about the first 33 years of Israel's history. They were followed by The Will to Live On: This is Our Heritage (2000), a whirlwind tour of Jewish history and sacred texts and companion volume to This is My God.[18]

A Hole in Texas (2004) is a novel about the discovery of the Higgs boson (whose existence was proven nine years later), while The Language God Talks: On Science and Religion (2010) is an exploration into the tension between religion and science that originated in a discussion Wouk had with the theoretical physicist Richard Feynman. [19]

The Lawgiver (2012) is an epistolary novel about a contemporary Hollywood writer of a movie script about Moses – with the consulting help of a nonfictional character: Herman Wouk himself, a “mulish ancient” who gets involved despite the strong misgivings of his wife.[20]

Wouk has kept a personal diary since 1937.[21] On September 10, 2008 Wouk formally presented the Library of Congress with his journals, which number more than 100 volumes as of 2012,[21] at a ceremony that honored him with the first Library of Congress Lifetime Achievement Award for the Writing of Fiction (now the Library of Congress Prize for American Fiction). Wouk often refers to his journals to check dates and facts in his writing, and he was hesitant to let the originals out of his personal possession. A solution was arrived at: a scanning service bureau was selected to scan the entire set of volumes into digital formats.[22]

In late 1944 Wouk met Betty Sarah Brown, a Phi Beta Kappa graduate of the University of Southern California, who was working as a personnel specialist in the navy while the Zane was undergoing repairs in San Pedro, California. The two quickly fell in love and after his ship went back to sea, Betty, who was born a Protestant and was raised in Grangeville, Idaho, began her study of Judaism and converted on her twenty-fifth birthday. They were married on December 10, 1945.[17]

With the birth of the first of their three children the next year, Wouk became a full-time writer to support his growing family. His first-born son, Abraham Isaac Wouk (1946 – 1951), was named after Wouk's deceased father. He drowned in a swimming pool accident in Mexico shortly before his fifth birthday. Wouk later dedicated War and Remembrance to him with the Biblical words "בלע המות לנצח – He will destroy death forever" (Isaiah 25:8). Their second and third children were, respectively, Iolanthe Woulff[23] (born 1950, a Princeton University graduate and author[24]), and Joseph Wouk (born 1954, a Columbia graduate, attorney, film producer, and writer who served in the Israeli Navy).[25]

The Wouks lived in New York, Saint Thomas, U.S. Virgin Islands (where he wrote Don't Stop the Carnival) and the Georgetown section of Washington, D.C. (where he wrote The Winds of War and War and Remembrance)[26] before settling in Palm Springs, California. His wife, who served for decades as his literary agent, died in that city on March 17, 2011.[27]

"I wrote nothing that was of the slightest consequence before I met Sarah," Wouk recalled after her death. "I was a gag man for Fred Allen for five years. In his time, he was the greatest of the radio comedians. And jokes work for what they are but they're ephemeral. They just disappear. And that was the kind of thing I did up until the time that I met Sarah and we married. And I would say my literary career and my mature life both began with her."[28]

His brother Victor (1919–2005) was an electrical engineer and a pioneer in the development of electric and hybrid vehicles. 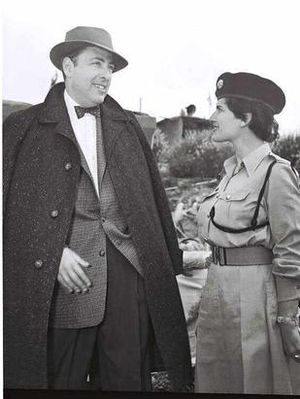