Edgar Flippen and Hugh Prather, Sr. decided that Highland Park needed a shopping center that could function as a town square, the developers traveled to Barcelona and Seville, Spain as well as to Mexico and California, studying the architecture in order to plan a retail center for Highland Park.

They hired American architects Marion Fresenius Fooshee and James B. Cheek to design the center, which opened in 1931. After the death of Hugh Prather, Sr. in 1959, management of the Village was taken over by his sons, John Prather and Hugh Prather, Jr. In 1966, the Howard Corporation acquired the shopping center. Under its management, little attention was given to proper tenant mix, landscaping deteriorated, overhead wires began to criss-cross the property, inappropriate signage appeared, and tenants were permitted to make facade alterations that were not in keeping with the classical architecture of the Village. The distinctive Spanish arches were covered up and newer materials that did not blend with the basic stone and stucco began to appear.

In 1976, the Howard Corporation decided to sell the Village and enlisted the help of the Henry S. Miller Company. Henry S. Miller, Jr. became attracted to the Village’s unrealized potential. Miller had a sentimental attachment to the property because his father had been an associate of the Flippen-Prather Realty Company from 1917 to 1919 and a close friend of both partners, Hugh Prather and Edgar Flippen.

Henry S. Miller and partners acquired the property in 1976 for $5 million and was developed by the Henry S. Miller Company, which later became Henry S. Miller Interests.[1] Under Henry S. Miller, the sleepy shopping center quickly turned into a luxury shopping destination that became known for harboring the most premiere designer shops in North Texas. Lesser known, local stores were replaced with Ralph Lauren and the state's first Chanel.

On February 16, 2000, the shopping center was recognized as a National Historic Landmark and the center was placed on the National Register of Historic Places on November 17, 1997.[5]

In 2009, Highland Park Village was purchased by Stephen Summers, Elisa Summers, Heather Washburne, and Ray Washburne for a record $170 million, the highest total price for a retail property of that year.[6] While retail in other parts of the country was hit hard by the recession, Highland Park Village managed to stay strong with the opening of Vince, a contemporary sportswear label and Leggiadro, a Manhattan-based luxury Italian store. The new owners replaced the former Banana Republic space with Texas' only Christian Louboutin and Diane Von Furstenberg.

With the news of the Tom Thumb and Williams Sonoma closing in the center, many speculate a massive retail overhaul with multiple new boutiques for brands in search of stores in the area.The center hosted the "goop" brand pop-up store for the 2014 winter season collaborated with founder, Gwyneth Paltrow that brought mass attention to the center.

Currently the Village commands about $125 per square foot; placing it among the priciest retail locales in the state, although inexpensive relative to luxury retail areas in larger markets New York City, Los Angeles, and Chicago.[8] Located near the wealthiest neighborhoods in the region, with Texas' first country club right next door, sales in Highland Park Village range from $1,000 per square foot to more than $1,500 annually.[9] 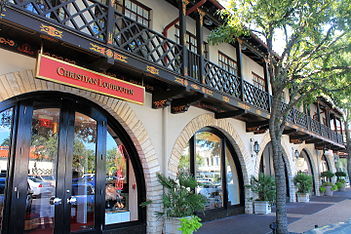 Highland Park Village is home to high-end stores for both men and women. Many are exclusives in Texas.

The Village also has a handful of dining options ranging from cafes and bistros to cheese and spirit shops.

The Village Theater, Texas' first luxury theater, is also found at Highland Park Village. When it first opened in 1935 its construction cost more than $100,000, which is over $1,700,000 inflation adjusted[10] and at the time was considered an astronomical amount. In 1979, the theater was renovated, with the balcony being converted into an additional screen. It was purchased by AMC Theatres in 1987, and the entire Art Deco interior was demolished, converting it into 11,000 square feet (1,000 m2) of retail space, and two brand-new theater screens upstairs. It was once again renovated in 2010.[11]