History of the Jews in Moldova

The history of the Jews in Moldova reaches back several centuries. Bessarabian Jews have been living in the area for some time. Today the Jewish community living in Moldova numbers 4,000.[2]

Main article: History of the Jews in Bessarabia 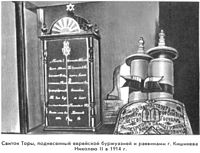 In 1903, a young Christian Russian boy, Mikhail Rybachenko, was found murdered in the town of Dubăsari (Dubossary), 37 km northeast of Chișinău. A Russian language antisemitic newspaper "Bessarabian" began to disseminate rumors about the murder being part of a Jewish ritual. Although the official investigation had determined the lack of any ritualism in the murder and eventually discovered that the boy had been killed by a relative (who was later found), the unrest caused by these and other rumors had resulted in a major pogrom during the Easter holidays. The pogrom lasted for three days, without the intervention of the police. Forty seven (some say 49) Jews were killed, 92 severely wounded, 500 slightly wounded and over 700 houses destroyed.[5]

Many of the younger Jews, including Mendel Portugali, made an effort to defend the community. 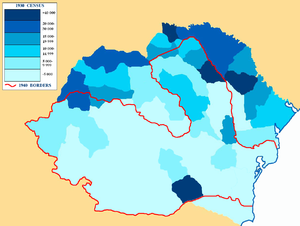 Jewish population per county in Greater Romania, according to the 1930 census

The majority (up to two-thirds) of Jews from Bessarabia fled before the retreat of the Soviet troops. However, 110,033 people from Bessarabia and Bukovina (the later included at the time the counties of Cernăuţi, Storojineţ, Rădăuţi, Suceava, Câmpulung, and Dorohoi - approximately 100,000 Jews) - all except a small minority of the Jews that did not flee in 1941 - were deported to the Transnistria Governorate, a region which was under Romanian military control during 1941–44.

....With the risk of not being understood by some traditionalists which may be among you, I am in favour of the forced migration of the entire Jew element from Bessarabia and Bukovina, which must be thrown over the border. Also, I am in favor of the forced migration of the Ukrainian element, which does not belong here at this time. I don't care if we appear in history as barbarians. The Roman Empire has made a series of barbaric acts from a contemporary point of view and, still, was the greatest political settlement. There has never been a more suitable moment. If necessary, shoot with the machine gun.[6]

The killing squads of Einsatzgruppe D, together with special non-military units attached to the German Wehrmacht and the Romanian army were involved in many massacres in Bessarabia (over 10,000 in a single month of war, in June–July 1941), while deporting other thousands to Transnistria.

In ghettos organized in several towns, as well as in camps (there was also a comparable number of Jews from Transnistria in those camps) many people died from starvation or bad sanitation, or were shot by special Nazi units right before the arrival of Soviet troops in 1944. The Romanian military administration of Transnistria kept very poor records of the people in the ghettos and camps. The only exact number found in Romanian sources is 59,392 died in the ghettos and camps from the moment those were open until mid-1943[7] This number includes all internees regardless of their origin, but does not include those that perished on the way to the camps, those that perished between mid-1943 and spring 1944, as well as those that perished in the immediate aftermath of the Romanian army's occupation of Transnistria (see for example the Odessa massacre).

After World War II, the number of Jews in Moldavian Soviet Socialist Republic increased significantly, peaking at 98,001 in 1970.[8] During the 1970s and especially late 1980s, many of them emigrated to Israel. The last Soviet census of 1989 registered 65,672 Jews in the Soviet Republic.[9]

The Jewish community in Moldova is associated with Jewish Educational Center - Hafetz Haim.

The Jewish Educational Center has built a Ashkenazi and a Sephardic synagogue with a Beit Midrash and is currently running most of the Jewish activists in Moldova.

There is also a Chabad synagogue in Chisinau which is associated with extreme messianist groups.

There is a Holocaust memorial in Chișinău and a memorial to the victims of the pogrom in the early 20th century.

However, antisemitism is still commonplace; several churches and political organisations still refer to anti-semitic rhetoric. In addition, far right and neo-Nazi groups are active in the country. Because religion was heavily restricted in Soviet times it is likely that there are many more people of Jewish heritage in Moldova than practice the religion, but many simply may not know about it.