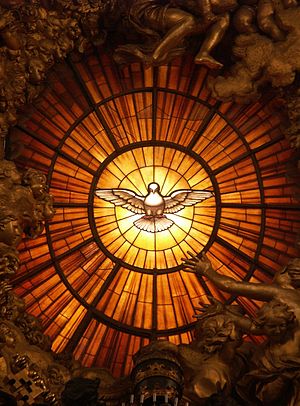 Depiction of the Christian Holy Spirit as a dove, by Gian Lorenzo Bernini, in the apse of Saint Peter's Basilica. 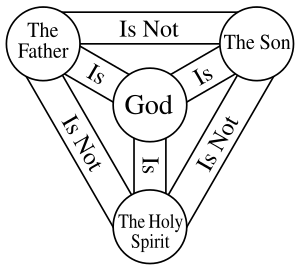 Holy Spirit or Holy Ghost is a term found in English translations of the Bible that is understood differently among the Abrahamic religions.[1][2]

The Hebrew language phrase ruach ha-kodesh (Hebrew: רוח הקודש, "holy spirit" also transliterated ruaḥ ha-qodesh) is a term used in the Hebrew Bible (Tanakh) and Jewish writings to refer to the spirit of YHWH (רוח יהוה). It literally means "the spirit of holiness" or "the spirit of the holy place". The Hebrew terms ruaḥ qodshəka, "thy holy spirit" (רוּחַ קָדְשְׁךָ), and ruaḥ qodshō, "his holy spirit" (רוּחַ קָדְשׁ֑וֹ) also occur (when a possessive suffix is added the definite article is dropped). The "Holy Spirit" in Judaism generally refers to the divine aspect of prophecy and wisdom. It also refers to the divine force, quality, and influence of the Most High God, over the universe or over his creatures, in given contexts.[3] 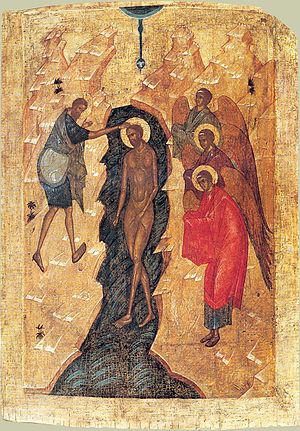 Theophany icon depicting the baptism of Christ and the descent of the Holy Spirit in the form of a dove above Christ's head. 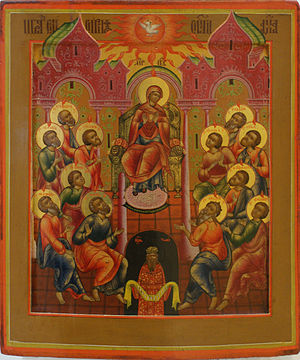 Pentecost icon depicting the descent of the Holy Spirit upon the Apostles and Mary in the form of tongues of flame above their heads.

For the large majority of Christians, The Holy Spirit (or Holy Ghost, from Old English gast, "spirit") is the third divine person of The Trinity: The "Triune God" manifested as Father, Son, and Holy Spirit; each aspect itself being God.[4][5][6] Two symbols from the New Testament canon are associated with the Holy Spirit in Christian iconography: a winged dove, and tongues of fire. Each depiction of the invisible Heavenly Spirit of God arose from different historical accounts in the Gospel narratives; the first being at the baptism of Jesus in the Jordan River where the Holy Spirit was said to descend in the form of a dove as the voice of God the Father spoke as described in Matthew, Mark, and Luke; the second being from the day of Pentecost, fifty days after Pascha where the descent of the Holy Spirit came upon the Apostles and other followers of Jesus Christ, as tongues of fire as described in the Acts of the Apostles 2:1–31.

For Orthodox Christians, the Theophany and Pentecostal troparion are:

Theophany Troparion (Tone 1): When Thou, O Lord, wast baptized in the Jordan, worship of the Trinity wast made manifest; for the voice of the Father bore witness to Thee, calling Thee His beloved Son. And the Spirit in the form of a dove confirmed the truth of His word. O Christ our God, Who hath appeared and enlightened the world, glory to Thee.[7]

Pentecost, Troparion (Tone 8): Blessed art Thou, Christ our God, Who didst make the fishermen wise by sending down upon them the Holy Spirit, and through them didst draw the world into Thy net. Lover of men, glory to Thee.

Pentecost Kontakion (Tone 8): When the Most High came down and confused the tongues, He divided the nations, but when He distributed the tongues of fire, He called all to unity. And with one accord we glorify the All-Holy Spirit."[8]

The Holy Spirit (Arabic: روح القدس Ruh al-Qudus, "the-Spirit the-Holy") is mentioned a number of times in the Qur'an, where it acts as an agent of divine action or communication. The Muslim interpretation of the Holy Spirit is generally consistent with other interpretations based upon the Old and the New Testaments. On the basis of narrations in certain Hadith some Muslims identify it with the angel Gabriel (Arabic Jibreel). The Spirit (الروح al-Ruh, without the adjective "holy" or "exalted") is described, among other things, as the creative spirit from God by which God enlivened Adam, and which inspired in various ways God's messengers and prophets, including Jesus and Abraham. The belief in a "Holy Trinity", according to the Qur'an, is forbidden and deemed to be blasphemy. The same prohibition applies to any idea of the duality of God (Allah).[9][10] Though grammatical gender has no bearing on sexual identity in non-personal nouns, the term "Holy Spirit" translates to, and is used in, the masculine form throughout the Qur'an.

The Bahá'í Faith has the concept of the Most Great Spirit, seen as the bounty of God.[11] It is usually used to describe the descent of the Spirit of God upon the messengers/prophets of God who include, among others, Jesus, Muhammad and Bahá'u'lláh.[12]

In Bahá'í belief, the Holy Spirit is the conduit through which the wisdom of God becomes directly associated with his messenger, and it has been described variously in different religions such as the burning bush to Moses, the sacred fire to Zoroaster, the dove to Jesus, the angel Gabriel to Muhammad, and the Maid of Heaven to Bahá'u'lláh.[13] The Bahá'í view rejects the idea that the Holy Spirit is a partner to God in the Godhead, but rather is the pure essence of God's attributes.[14]