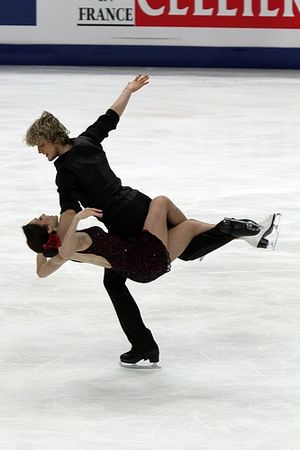 Ice dancing is a discipline of figure skating that draws from ballroom dancing. It joined the World Figure Skating Championships in 1952, and became a Winter Olympic Games medal sport in 1976.

As in pair skating, dancers compete as a couple consisting of a man and a woman. Ice dance differs from pair skating by having different requirements for lifts. Couples must perform spins as a team in a dance hold, and throws and jumps are disallowed. Typically, partners are not supposed to separate by more than two arm lengths. Originally, partners were supposed to be in a dance hold the entire program, though modern ice dancing has lifted this restriction somewhat.

Another distinction between ice dance and other skating disciplines is the use of music in the performances. In ice dancing, dancers must always skate to music with a definite beat or rhythm. Singles and pair skaters more often skate to the melody and phrasing of their music, rather than its beat. This is severely penalized in ice dance.

In some non-ISU competitions, solo dancers may also compete. 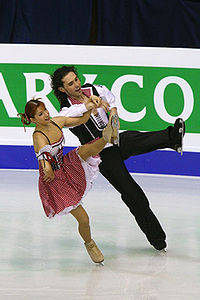 In compulsory dances, all dance teams in a competition perform the same standard steps and holds to music of a specified tempo. One or more compulsory dances were skated as the first phase of competitions in ice dancing, but they are also popular as a form of recreational or social dance among skaters. The patterns for most dances either cover one-half or one full circuit of the rink. The International Skating Union (ISU) would publish the compulsory dances that would be performed prior to each season, and CDs were later drawn for specific events.

The compulsory dance was discontinued in all ISU competitions after the 2009–2010 season. The 2010 World Championships were the last event to include a CD (the Golden Waltz), and Italians Federica Faiella / Massimo Scali were the last dance team to perform one in competition.[1] 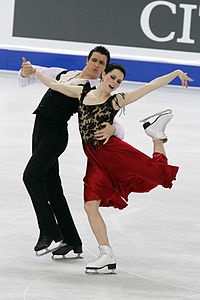 The original dance was the second of three parts in ice dancing competitions. For the original dance, the ISU would designate a rhythm or set of rhythms each year that all dancers must perform to, or a specific theme, such as folk dance. The competitors were allowed to choose their own music and choreography. The length of the program was shorter than the free dance, and the skaters had to adhere to more rules. The dance was to be choreographed so that the steps did not cross the midline of the rink, with certain exceptions for this rule that took into account required step sequences such as the diagonal footwork sequence. Closed partnering positions and close skating were also important for the original dance.

Following the 2009-10 season, the ISU congress voted to change the format of ice dance events and make them more similar to pairs and singles skating. Thus, the new short dance was introduced at the start of the 2010-11 season. This segment of the competition combines features of the discontinued CDs and ODs; each team performs a required pattern from one of the compulsory dances for about one half of the dance, then performs its own choreography, with some required elements, to a theme or rhythm specified by the ISU. Skaters are free to choose their own music, so long as the tempo is appropriate.

The free dance is a part of an ice dancing competition. It is usually the second and final part of the competition to be contested, after the short dance.

In the free dance, teams are free to choose their own rhythms, program themes, and therefore music. Creativity is also strongly encouraged. Since 1998, dancers have been required to include certain elements in their free dances, including step sequences, lifts, dance spins, and multi-rotation turns called twizzles. Senior-level free dances are four minutes long (plus or minus 10 seconds) and usually include multiple music cuts and tempos that help bring variety to the routine. The hand holds and positions are much more open and free than in the compulsory and in the original dance. 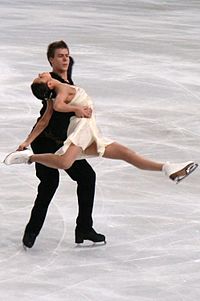 Lifts in ice dancing differ from those in pair skating in prohibiting the man from extending his hands above his head, but allowing a wider variety of holds. The more change of direction, flexibility, and height in the lift, the greater number of points a team can earn from the judges under the Code of Points scale. Dance lifts have progressively become more athletic and risky.[2][3]

Multi-revolution jumps are not permitted but "half" jumps are now allowed. Spins must be performed by both skaters revolving around the same axis, the same as in pair spins.

Many of the compulsory dances were developed by dancers from Great Britain in the 1930s.[4] Ice dancing joined the World Championships in 1952. 12 of the first 16 World Championships in ice dance were won by British teams. The British style of ice dance originally emphasized upright carriage and strong edges achieved by deep knee bend. Beginning in the 1960s, Eastern European skaters started a trend to dance in more open positions, which allowed for greater speed over the ice, more upper-body involvement, and greater projection towards the audience.[5]

Ice dancing, then known as "rhythmic skating," was a demonstration event at the 1968 Winter Olympics at Grenoble, won by the team of Diane Towler and Bernard Ford of Great Britain.[6] It became an official medal event eight years later in 1976 at Innsbruck, with the first title won by Lyudmila Pakhomova / Aleksandr Gorshkov.[7]

In the 1970s, top Soviet dancers began to develop a more theatrical style of ice dancing incorporating elements of ballet and often based on narrative program themes.[8] The Russian style of dance emphasized extended line and speed, rather than difficult rhythmic footwork.[9] In some cases, elaborate choreography for the upper body was used to camouflage fundamental deficiencies of skating technique.[10]

By the early 1990s, all the top dance teams were performing dances in the theatrical, rather than ballroom, style.[11][12] Deciding to attempt to restrain theatricality, the International Skating Union pushed ice dancing to return to its ballroom roots by adding more restrictions on music and dance holds. In June 1993, the ISU decreed that free dance music must have a rhythmic beat and a melody and be arranged and orchestrated for use on the dance floor.[13] Amid complaints that ice dance had become too boring, these restrictions were removed and replaced with requirements that dancers include specified technical elements in the original dance and free dance. Step sequences in face-to-face holds, no-touching step sequences, dance lifts, dance spins, and twizzles became required elements.[14]

In 1990, the original set pattern (OSP) was replaced by the original dance (OD). For many years, competitions included two compulsory dances (CD) but this was reduced to one by 2003.

Skaters from the Four Continents have become more competitive since the 2000s. Tanith Belbin / Ben Agosto took silver in the 2006 Winter Olympics.[15] At the 2010 Winter Olympics, Tessa Virtue / Scott Moir of Canada took gold, ending Europe's 34 year streak.[16] They were the youngest skaters (aged 20 and 22 years of age, respectively) to win the Olympic ice dancing title and the first former World Junior champions to do so.

After the 2009–2010 season, the ISU reduced the number of competition segments from three to two by merging the compulsory and original dances into the short dance (SD). Compulsory dances were renamed pattern dances.

Ice dancers' blades are about an inch shorter in the rear than those used by skaters in other disciplines, to accommodate the intricate footwork and close partnering in dance. However, this is not always the case. They also possess a smaller pick to allow for better edge-work. The most common colors for boots are black for men and white for women.

Skaters are generally free to select their own attire, with a few restrictions. Partners are not required to have matching costumes.[17] In competition, females may wear a dress, typically with matching attached briefs, and since 2004, they may also choose trousers. They may wear opaque flesh-colored leggings or tights under dresses and skirts, which may extend to cover their skates. Men must wear trousers – they are not allowed to wear tights. Skaters and family members may design their own costumes or turn to professional designers.[17][18] According to current ISU regulations, costumes in competition "must be modest, dignified and appropriate for athletic competition – not garish or theatrical in design. Clothing may, however, reflect the character of the music chosen."[19] Although the use of flesh-colored fabric means the costumes are often less revealing than they may appear, there have been repeated attempts to ban clothing that gives the impression of "excessive nudity" or that is otherwise inappropriate for athletic competition.[20] In general, accessories or props are not permitted in competition.[19] The ISU allowed an exception for the original dance in the 2007–2008 season but never since.

Ice dancers are required to skate to music with a definite beat. Until the 2014-2015 season, ice dancing was the only figure skating discipline that allowed music with words in competition.