Ice skates are boots with blades attached to the bottom, used to propel the bearer across a sheet of ice while ice skating.

The first ice skates were made from leg bones of horse, ox or deer, and were attached to feet with leather straps. These skates required a pole with a sharp metal spike that was used for pushing the skater forward, unlike modern bladed skates.[1]

Modern skates come in many different varieties, which are chosen depending on the nature of the requirements needed for the skating activity. They are worn recreationally in ice rinks or on frozen bodies of water across the globe and are used as footwear in many sports, including figure skating, ice hockey, bandy, speed skating and tour skating. 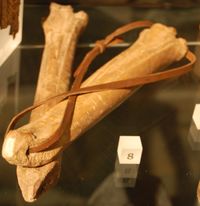 Medieval bone skates on display at the Museum of London.

According to a study done by Federico Formenti, University of Oxford, and Alberto Minetti, University of Milan, Finns were the first to develop ice skates some 5,000 years ago from animal bones.[2] This was important for the Finnish populations to save energy in harsh winter conditions when hunting in Finnish Lakeland.[3][4] The first skate to use a metal blade was found in Scandinavia and was dated to 200 A.D. and was fitted with a thin strip of copper folded and attached to the underside of a leather shoe.

William Fitzstephen, writing in the 12th century, described the use of bone skates in London:

when the great fenne or moore (which watereth the walles of the citie on the North side) is frozen, many young men play upon the ice, some striding as wide as they may, doe slide swiftly... some tye bones to their feete, and under their heeles, and shoving themselves by a little picked staffe, doe slide as swiftly as birde flyeth in the aire, or an arrow out of a crossbow.[5]

There are five main types of ice skates: the figure skate, the hockey skate, the bandy skate, the racing skate and the touring skate. 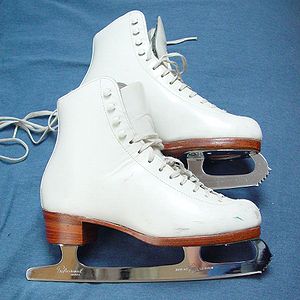 Figure skates are used in the sport of figure skating. Unlike hockey skates, they have toe picks on the front of the blade, which are usually made out of stainless steel or aluminium with a steel runner. The toe pick has a variety of uses, but is most commonly used for certain jumps in figure skating, such as the Lutz jump and toe loop or starting a backspin. Figure skating boots are typically made of several layers of leather and the leather is very stiff to provide ankle support. In addition, the figure skate's blade is curved, allowing for minute adjustments in balance and weight distribution.

The base of the figure-skate blade is slightly concave, or "hollow ground." The hollow, which runs the length of the blade, creates two edges, which come in contact with the ice. The forward part of the blade, the toe-rake, is saw-toothed and is used for jumps and spins on the toes.[6]

Hockey skates are used for playing the games of ice hockey and ringette. The boot is generally made of molded plastic, leather (often synthetic), and ballistic nylon. Skates used in competitive hockey rarely use molded plastic for the upper boot, as this results in limited mobility.

The skates used by goaltenders are cut lower in the ankle than a normal hockey skate and the boot sits closer to the ice for a lower center of gravity. The boot itself is encased in hardened plastic, called a "cowling", protecting the toe, ankle and heel from the force of the shot puck. The blade is usually longer and has less rocker (curvature to the blade) to make it easier for the goalie to move side to side in the crease. Goalie skates lack a tendon guard. Unlike regular hockey skates, goalie skates are usually protected by a synthetic material covering the toe-part of the skate. This is to prevent damage from the puck. The blade of the goalie skate is not as useful in turning as regular hockey skates, because the blade is rockered less, thus making turns slightly inconvenient. The material used to make the boot of the goalie skate is a harder synthetic material than regular hockey boots. 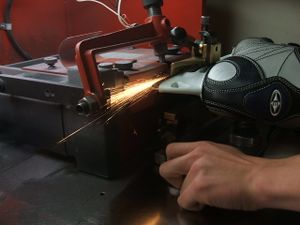 Sharpening ice hockey skates plays a key factor in a player’s ability to skate and players will sharpen their skates hundreds of times throughout their career. Similar to figure skates, the blade is hollow ground in cross section, creating two edges that contact and cut into the ice, allowing increased maneuverability. The blades are sharpened with round-edged grinding wheels that create the two edges. The wheels grind out a hollow semi-circle along the length of the underside of the blade, forming the sharp edge on each side. Skate blade sharpness is measured by the thickness of the round-edged grinding wheel being used, the smaller the radius, the sharper the edge will be. The sharpness chosen by a player is based completely upon preference, not player size or level of play. While a half-inch radius of hollow is the most common and standard sharpening for most players, the standard radius of hollow for goalies is three-fourths inch.[citation needed]

Bandy skates are used for playing the game of bandy. The boot is generally made of leather (often synthetic). The boot is lower than the hockey version, often not covering the ankles. All bandy skates are designed such that they will not cause injury to an opponent. The blade is generally an inch longer than the hockey skates, allowing for higher speeds at the large bandy rink. The Russian bandy skates have an even longer blade and a very low cut shoe.

Racing skates, also known as speed skates, have long blades and are used for speed skating. A clap skate (or clapper skate) is a type of skate where the shoe is connected to the blade using a hinge. Short track racing skates have a longer overall height to the blade to allow for deep edge turns without the boot contacting the ice. For better turning ability, racing skates may have a radius, from 8 metres for short track to 22 metres for long track.[7] Racing skates have a completely flat bottom. There is no hollow, only a squared off bottom with two edges. This improves glide time, by not cutting into the ice.

Touring skates (or Nordic skates) are long blades that can be attached, via bindings, to hiking or cross-country ski boots and are used for long distance tour skating on natural ice. The blades are approximately 50 cm long with a radius of curvature (or rocker) of about 25 m. The blades are from 1 to 1.5 mm wide, with a flat cross-section. The length and long radius of the blades makes touring skates more stable on uneven natural ice than skates with shorter, more rockered blades. Since tour skating often involves walking (Kluning) between lakes or around unskateable sections, the fact that the blades can be easily removed from one's boots is an asset. Thus, these skates are often called kluunschaats in the Netherlands. [8]

With most modern models of skates the blades are bonded to the bottom of an aluminum foot-plate. A binding for a specific type of boot is mounted on the top of the foot-plate. Traditionally, the bindings held down both toe and heel of the boot (fixed-heel). Some bindings require special boots like telemark ski boots with a "duck-bill" shaped toe, others like the Multiskate have padded adjustable straps that will attach to most hiking boots.

Since the early 1990s, more people commonly like to mount free-heel cross-country ski bindings and attach matching ski boots on the skates.[citation needed] The free-heel models give the equivalent effect as the klap skate form of speed skates. There are several makers of these skates in Sweden, Netherlands and Finland.

Although mainly used for non-competitive touring, nordic skates are sometimes used in marathon speed skating races on natural ice, such as Vikingarännet (The Viking Run), a long distance tour skating event in Sweden

Before 1970 most touring skates had a wooden foot-plate which was attached to the boot with leather straps.[9] Examples were the Gillbergs skate from Sweden,[10] and the Stheemann "wooden Norwegian" from The Netherlands.[11] Even earlier, in the years 1870 to 1900, there were very similar models made in North America, like the Donaghue from USA.[12]

Inexpensive skates for recreational skaters usually resemble either figure skates or hockey skates, but recreational ice skates resembling inline skates with a molded plastic boot are also available. These recreational skates are commonly rented from ice rinks by beginners who do not own their own skates. In the non-American English-speaking world they are sometimes called 'death wellies' by skaters who own their own equipment because of their appearance and their reputation for giving the wearer blisters. People who own their own skates may further reduce the risk of blisters by adding a friction management patch to areas inside the skate that could rub or chafe.

Also known as twin blade skates, "cheese cutters", bob skates, or "bobby" skates, these skates are worn by young children who are learning. The double blades increase stability and help the child to balance.