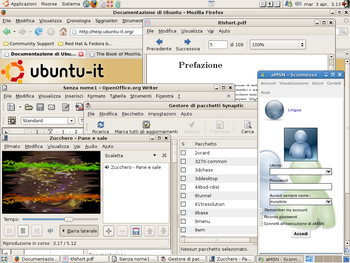 The terms are frequently abbreviated to the numeronyms i18n (where 18 stands for the number of letters between the first i and the last n in the word “internationalization,” a usage coined at DEC in the 1970s or 80s)[2][3] and L10n for “localization,” due to the length of the words.

Microsoft[5] defines Internationalization as a combination of World-Readiness and localization. World-Readiness is a developer task, which enables a product to be used with multiple scripts and cultures (globalization) and separating user interface resources in a localizable format (localizability, abbreviated to L12y).[6] 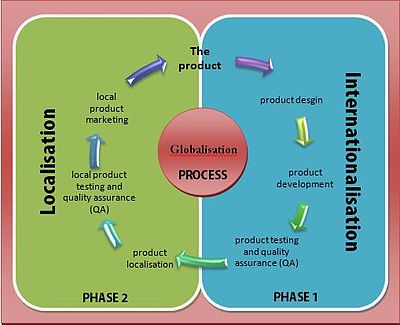 The internationalization and localization process
(based on a chart from the LISA website.)

The main task of language localization is translation. This may involve:

Computer software can encounter differences above and beyond straightforward translation of words and phrases, because computer programs can generate content dynamically. These differences may need to be taken into account by the internationalization process in preparation for translation. Many of these differences are so regular that a conversion between languages can be easily automated. The Common Locale Data Repository by Unicode provides a collection of such differences. Its data is used by major OSs, including Microsoft Windows, OS X and Debian, and by major internet companies or projects such as Google and the Wikimedia Foundation. Examples of such differences include:

Different countries have different economic conventions, including variations in:

In particular, the United States and Europe differ in most of these cases. Other areas often follow one of these.

Specific third-party services, such as online maps, weather reports, or payment service providers, might not be available worldwide from the same carriers, or at all.

Time zones vary across the world, and this must be taken into account if a product originally only interacted with people in a single time zone. For internationalization, UTC is often used internally and then converted into a local time zone for display purposes.

Localization also may take into account differences in culture, such as:

In order to internationalize a product, it is important to look at a variety of markets that your product will foreseeably enter. Details such as field length for street addresses, unique format for the address, ability to make the zip code field optional to address countries that do not have zip codes or the state field for countries that do not have states, plus the introduction of new registration flows that adhere to local laws are just some of the examples that make internationalization a complex project.[9][10]

A broader approach takes into account cultural factors regarding for example the adaptation of the business process logic or the inclusion of individual cultural (behavioral) aspects.[11]

The current prevailing practice is for applications to place text in resource strings which are loaded during program execution as needed. These strings, stored in resource files, are relatively easy to translate. Programs are often built to reference resource libraries depending on the selected locale data. One software library that aids this is gettext.

Thus to get an application to support multiple languages one would design the application to select the relevant language resource file at runtime. Resource files are translated to the required languages. This method tends to be application-specific and, at best, vendor-specific. The code required to manage date entry verification and many other locale-sensitive data types also must support differing locale requirements. Modern development systems and operating systems include sophisticated libraries for international support of these types.

While translating existing text to other languages may seem easy, it is more difficult to maintain the parallel versions of texts throughout the life of the product.[12] For instance, if a message displayed to the user is modified, all of the translated versions must be changed. This in turn results in a somewhat longer development cycle.

To some degree (e.g. for Quality assurance), the development team needs someone who understands foreign languages and cultures and has a technical background. In large societies with one dominant language/culture, it may be difficult to find such a person.

One example of the pitfalls of localization is the attempt made by Microsoft to keep some keyboard shortcuts significant in local languages. This has resulted in some (but not all) programs in the Italian version of Microsoft Office using "CTRL + S" (sottolineato) as a replacement for "CTRL + U" (underline), rather than the (almost) universal "Save" function.

In a commercial setting, the benefit from localization is access to more markets. However, there are considerable costs involved, which go far beyond just engineering. First, software must generally be re-engineered to make it world-ready.

Then, providing a localization package for a given language is in itself a non-trivial undertaking, requiring specialized technical writers to construct a culturally appropriate syntax for potentially complicated concepts, coupled with engineering resources to deploy and test the localization elements. Further, business operations must adapt to manage the production, storage and distribution of multiple discrete localized products, which are often being sold in completely different currencies, regulatory environments and tax regimes.

Finally, sales, marketing and technical support must also facilitate their own operations in the new languages, in order to support customers for the localized products. Particularly for relatively small language populations, it may thus never be economically viable to offer a localized product. Even where large language populations could justify localization for a given product, and a product's internal structure already permits localization, a given software developer/publisher may lack the size and sophistication to manage the ancillary functions associated with operating in multiple locales. For example, Microsoft Windows 7 has 96 language packs available.[13]

One alternative, most often used by open source software communities, is self-localization by teams of end-users and volunteers. The KDE3 project, for example, has been translated into over 100 languages, and KDE4 is available in 68.[14] However, self-localization requires that the underlying product first be engineered to support such activities, which is a non-trivial endeavor.