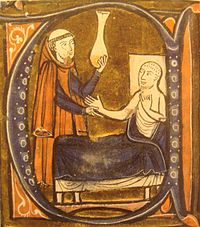 Irani-tebb or Irani Traditional Medicine, also called Tebb e Sonnati is one of famous forms of traditional medicine which is grounded in the four humours concept: Phlegm (Balgham), Blood (Dam), Yellow bile (Ṣafrā') and Black bile (Saudā'). Some traditional medicine forms are in this base. Unani and Graeco-Arabic are the most famous of that. It is based on the teachings of Greek physician Hippocrates and Roman physician Galen, and developed by Rhazes, Avicenna (Ibn Sena) into an elaborate medical system.

The old medical system was developed by a number of nations. Irani-tebb, although often presumed as part of Unani medicine because of a great overlap between these two, still is a separate tradition with roots further in the ancient Iranian and Indian past.

Ancient Iranian Medicine, the basic knowledge of four humours as a healing system, was developed by Hakim Ibn Sina (known as Avicenna in the west) in his medical encyclopedia The Canon of Medicine.[1][2]