From Infogalactic: the planetary knowledge core
Jump to: navigation, search
This article is about the prophet. For other uses, see Isaiah (disambiguation).
"Isaias" and "Esaias" redirect here. For the given name, see Isaias (given name).

The exact relationship between the Book of Isaiah and any such historical Isaiah is complicated.[lower-alpha 1] One widespread view sees parts of the first half of the book (chapters 1–39) as originating with the historical prophet, interspersed with prose commentaries written in the time of King Josiah a hundred years later; with the remainder of the book dating from immediately before and immediately after the end of the exile in Babylon, almost two centuries after the time of the original prophet.

Jews and Christians consider the Book of Isaiah a part of their Biblical canon; he is the first listed (although not the earliest) of the Nevi'im Aharonim, the latter prophets.[6] Muslims consider Isaiah a prophet mentioned in Muslim exegesis of canonical scriptures.[7] 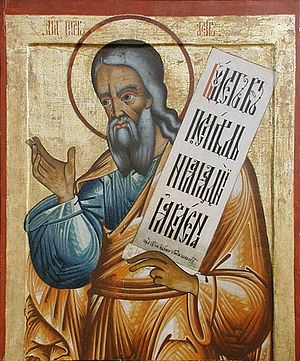 The first verse of the Book of Isaiah states that Isaiah prophesied during the reigns of Uzziah (or Azariah), Jotham, Ahaz, and Hezekiah, the kings of Judah (Isaiah 1:1). Uzziah's reign was 52 years in the middle of the 8th century BCE, and Isaiah must have begun his ministry a few years before Uzziah's death, probably in the 740s BCE. Isaiah lived until the fourteenth year of Hezekiah's reign (who died 698 BCE), and may have been contemporary for some years with Manasseh. Thus Isaiah may have prophesied for as long as 64 years.

Isaiah's wife was called "the prophetess" (Isaiah 8:3), either because she was endowed with the prophetic gift, like Deborah (Judges 4:4) and Huldah (2 Kings 22:14–20), or simply because she was the "wife of the prophet" (as he is named, for instance in Isaiah 38:1). The second interpretation, that it was simply an honorary title is likely.[8] They had two sons, naming one She'ar-Ya'shuv, meaning "A remnant shall return" (Isaiah 7:3) and the younger, Maher-Shalal-Hash-Baz, meaning, "Spoil quickly, plunder speedily." (Isaiah 8:3) The book of Isaiah, along with the book of Jeremiah, is distinctive in the Hebrew bible for its direct portrayal of the "wrath of the Lord" as presented, for example, in Isaiah 9:19 stating, "Through the wrath of the Lord of hosts is the land darkened, and the people shall be as the fuel of the fire."[9]

In early youth, Isaiah may have been moved by the invasion of Israel by the Assyrian monarch Tiglath-Pileser III (2 Kings 15:19); and again, twenty years later, when he had already entered his office, by the invasion of Tiglath-Pileser and his career of conquest. Ahaz, king of Judah, at this crisis refused to co-operate with the kings of Israel and Syria in opposition to the Assyrians, and was on that account attacked and defeated by Rezin of Damascus and Pekah of Israel (2 Kings 16:5; 2 Chronicles 28:5–6). Humbled, Ahaz sided with Assyria and sought the aid of Tiglath-Pileser against Israel and Syria. The consequence was that Rezin and Pekah were conquered and many of the people carried captive to Assyria (2 Kings 15:29, 16:9; 1 Chronicles 5:26).

Soon after this, Shalmaneser V determined to subdue the kingdom of Israel, Samaria was taken and destroyed (722 BCE). So long as Ahaz reigned, the kingdom of Judah was unmolested by the Assyrian power; but on his accession to the throne, Hezekiah, who was encouraged to rebel "against the king of Assyria" (2 Kings 18:7), entered into an alliance with the king of Egypt (Isaiah 30:2–4). This led the king of Assyria to threaten the king of Judah, and at length to invade the land. Sennacherib (701 BC) led a powerful army into Judah. Hezekiah was reduced to despair, and submitted to the Assyrians (2 Kings 18:14–16). But after a brief interval war broke out again. Again Sennacherib led an army into Judah, one detachment of which threatened Jerusalem (Isaiah 36:2–22; 37:8). Isaiah on that occasion encouraged Hezekiah to resist the Assyrians (37:1–7), whereupon Sennacherib sent a threatening letter to Hezekiah, which he "spread before the LORD" (37:14).

Then Isaiah the son of Amoz sent unto Hezekiah, saying: "Thus saith the LORD, the God of Israel: Whereas thou hast prayed to Me against Sennacherib king of Assyria,

this is the word which the LORD hath spoken concerning him: The virgin daughter of Zion hath despised thee and laughed thee to scorn; the daughter of Jerusalem hath shaken her head at thee.

Whom hast thou taunted and blasphemed? And against whom hast thou exalted thy voice? Yea, thou hast lifted up thine eyes on high, even against the Holy One of Israel!" (37:21–23)

According to the account in 2 Kings 19 (and its derivative account in 2 Chronicles 32) the judgment of God now fell on the Assyrian army and wiped out 185,000 of its men. "Like Xerxes in Greece, Sennacherib never recovered from the shock of the disaster in Judah. He made no more expeditions against either the Southern Levant or Egypt."[10]

The remaining years of Hezekiah's reign were peaceful (2 Chr 32:23–29). Isaiah probably lived to its close, and possibly into the reign of Manasseh, but the time and manner of his death are not specified in either the Bible or other primary sources. There is a tradition in Rabbinic literature that he suffered martyrdom by being sawn in two under the orders of Manasseh.[11] 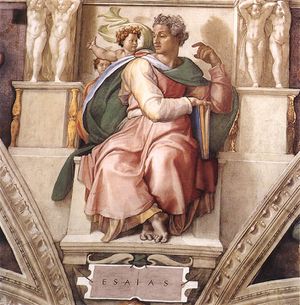 Gregory of Nyssa (c. 335–395), believed that the Prophet Isaiah "knew more perfectly than all others the mystery of the religion of the Gospel". Jerome (c. 342–420) also lauds the Prophet Isaiah, saying, "He was more of an Evangelist than a Prophet, because he described all of the Mysteries of the Church of Christ so vividly that you would assume he was not prophesying about the future, but rather was composing a history of past events."[12] Of specific note are the songs of the Suffering Servant which Christians say are a direct prophetic revelation of the nature, purpose and detail of the death of Jesus Christ.

The Book of Isaiah is quoted many times by New Testament writers.[13] Ten of those references are about the Suffering Servant, how he will suffer and die to save many from their sins, be buried in a rich man's tomb, be a light to the Gentiles. The Gospel of John even says that Isaiah "saw Jesus’ glory and spoke about him."[14][non-primary source needed]

Although Isaiah is not mentioned by name in the Quran or the Hadith, Muslim sources have accepted him as a prophet.[15] Some Muslim scholars, such as Ibn Kathir and Kisa'i, reproduced Jewish traditions, transmitted through early Jewish converts to Islam, regarding Isaiah. Such Old Testament stories, which are not confirmed by the Quran or prophetic hadith, are referred to as Isra'iliyyah, and are not considered strong enough to be used as evidence in Islamic law. Isaiah is mentioned as a prophet in Ibn Kathir's Story of Prophet Isaiah,[16] and the modern writers Muhammad Asad and Abdullah Yusuf Ali[17] accepted Isaiah as a true Hebrew prophet, who preached to the Israelites following the death of King David. Isaiah is well known in Muslim exegesis and literature, notably for his predictions of the coming of Jesus and Muhammad.[18] Isaiah's narrative in Muslim literature can be divided into three sections. The first establishes Isaiah as a prophet of Israel during the reign of Hezekiah; the second relates Isaiah's actions during the siege of Jerusalem by Sennacherib; and the third warns the nation of coming doom.[19]

Muslim exegesis preserves a tradition parallel to the Hebrew Bible,[20] which states that Hezekiah was king in Jerusalem during Isaiah's time. Hezekiah heard and obeyed Isaiah's advice, but could not quell the turbulence in Israel.[7] This tradition maintains that Hezekiah was a righteous man and that the turbulence worsened after him. After the death of the king, Isaiah told the people to not forsake God, and he warned Israel to cease from its persistent sin and disobedience. Muslim tradition maintains that the unrighteous of Israel in their anger sought to kill Isaiah.[7] In a death that resembles that attributed to Isaiah in Lives of the Prophets, Muslim exegesis recounts that Isaiah was martyred by Israelites by being sawn in two.[7]

In the Baha'i Faith

Isaiah is considered a lesser prophet in the Baha'i Faith.[21] Abdul-Baha mentions prophecies by Isaiah which refer to a man called the Branch as applying to Baha'ullah.[22]

According to the Rabbinic literature, Isaiah was a descendant of the royal house of Judah and Tamar (Sotah 10b). He was the son of Amoz (not to be confused with Prophet Amos), who was the brother of King Amaziah of Juda. (Talmud tractate Megillah 15a).[23]