From Infogalactic: the planetary knowledge core
Jump to: navigation, search
This article is about the 20th-century philosopher. For the 18th-century rabbi, see Isaiah Berlin (rabbi).

Sir Isaiah Berlin OM CBE FBA (6 June 1909 – 5 November 1997) was a Latvian-British social and political theorist, philosopher and historian of ideas, widely considered to be the dominant British scholar of his generation.[1] He excelled as an essayist, conversationalist and raconteur, and was a brilliant lecturer who spontaneously improvised richly allusive and coherently structured material.[1] In its obituary of the scholar, the Independent stated that "Isaiah Berlin was often described, especially in his old age, by means of superlatives: the world's greatest talker, the century's most inspired reader, one of the finest minds of our time... there is no doubt that he showed in more than one direction the unexpectedly large possibilities open to us at the top end of the range of human potential".[2]

In 1932, at the age of 23, Berlin was elected to a prize fellowship at All Souls College, Oxford. He translated works by Ivan Turgenev from Russian into English and, during the war, worked for the British Diplomatic Service. From 1957 to 1967 he was Chichele Professor of Social and Political Theory at the University of Oxford. He was president of the Aristotelian Society from 1963 to 1964. In 1966, he played a crucial role in founding Wolfson College, Oxford, and became its first President.

Berlin was appointed a CBE in 1946, knighted in 1957, and was awarded the Order of Merit in 1971. He was President of the British Academy from 1974 to 1978. He also received the 1979 Jerusalem Prize for his writings on individual freedom.

An annual Isaiah Berlin Lecture is held at the Hampstead Synagogue, at Wolfson College, Oxford and at the British Academy. Berlin's work on liberal theory and on value pluralism has had a lasting influence. 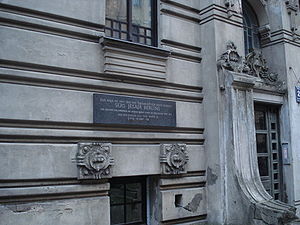 Plaque marking what was once Berlin's childhood home in Riga, engraved in Latvian, English and Hebrew with the tribute "The British philosopher Sir Isaiah Berlin lived in this house 1909–1915"

Berlin was the only surviving child of a wealthy Jewish family, the son of Mendel Berlin, a timber industrialist and direct descendant of Shneur Zalman (founder of Chabad Hasidism), and his wife Marie, née Volshonok. He spent his childhood in Riga, and later lived in Andreapol´ (a small timber town near Pskov, effectively owned by the family business)[3] and Petrograd (now Saint Petersburg), witnessing both the February and October Revolutions of 1917.

Feeling increasingly oppressed by life under Bolshevik rule, the family left Petrograd, on 5 October 1920, for Riga, but encounters with anti-Semitism and difficulties with the Latvian authorities convinced them to leave, and they moved to Britain in early 1921 (Mendel in January, Isaiah and Marie at the beginning of February), when Berlin was eleven.[4] In London, the family first stayed in Surbiton, then within the year they bought a house in Holland Park, and six years later in Hampstead. Berlin's English was virtually nonexistent at first, but he became fluent within a year.[5]

Berlin was educated at St Paul's School (London), then at Corpus Christi College, Oxford, where he studied Greats (Classics). In his final examinations, he took a First, winning The John Locke Prize for his performance in the philosophy papers, in which he outscored A. J. Ayer.[6] He subsequently took another degree at Oxford in PPE (Philosophy, Politics and Economics), winning another First after less than a year on the course. He was appointed a tutor in philosophy at New College, Oxford, and soon afterwards was elected to a prize fellowship at All Souls College, Oxford.

While still a student, he befriended Ayer (with whom he was to share a lifelong amicable rivalry), Stuart Hampshire, Richard Wollheim, Maurice Bowra, Stephen Spender, J. L. Austin and Nicolas Nabokov. In 1940, he presented a philosophical paper on other minds to a meeting attended by Ludwig Wittgenstein at Cambridge University. Wittgenstein rejected the argument of his paper in discussion but praised Berlin for his intellectual honesty and integrity. Berlin was to remain at Oxford for the rest of his life, apart from a period working for British Information Services in New York from 1940 to 1942, and for the British embassies in Washington, DC, and Moscow from then until 1946. For his services, he was appointed a CBE in the 1946 New Year Honours.[7] Berlin was fluent in Russian and English, spoke French, German and Italian, and knew Latin and Ancient Greek. Meetings with Anna Akhmatova in Leningrad in November 1945 and January 1946 had a powerful effect on both of them, and serious repercussions for Akhmatova (who immortalised the meetings in her poetry).[8]

In 1956 he married Aline Halban, née de Gunzbourg, who was not only the former wife of an Oxford colleague and a former winner of the ladies' golf championship of France, but from an exiled half Russian-aristocratic and half ennobled-Jewish banking and petroleum family (her mother was Yvonne Deutsch de la Meurthe, granddaughter of Henri Deutsch de la Meurthe) based in Paris.

He was elected a Foreign Honorary Member of the American Academy of Arts and Sciences in 1959.[9] He was instrumental in the founding, in 1966, of a new graduate college at Oxford University: Wolfson College. The college was founded to be a centre of academic excellence which, unlike many other colleges at Oxford, would also be based on a strong egalitarian and democratic ethos.[10] Berlin was a member of the Founding Council of the Rothermere American Institute at Oxford University.[11] As later revealed, when he was asked to evaluate the academic credentials of Isaac Deutscher, Isaiah Berlin argued against such a promotion, because of the profoundly pro-communist militancy of the candidate.[12][page needed]

Berlin died in Oxford in 1997, aged 88.[1] He is buried there in Wolvercote Cemetery. On his death, the obituarist of The Independent wrote: "he was a man of formidable intellectual power with a rare gift for understanding a wide range of human motives, hopes and fears, and a prodigiously energetic capacity for enjoyment – of life, of people in all their variety, of their ideas and idiosyncrasies, of literature, of music, of art".[2] The front page of The New York Times concluded: "His was an exuberant life crowded with joys – the joy of thought, the joy of music, the joy of good friends... The theme that runs throughout his work is his concern with liberty and the dignity of human beings... Sir Isaiah radiated well-being."[13]

Berlin is popularly known for his essay "Two Concepts of Liberty", delivered in 1958 as his inaugural lecture as Chichele Professor of Social and Political Theory at Oxford. The essay, with its analytical approach to the definition of political concepts, re-introduced the methods of analytic philosophy to the study of political philosophy. Spurred by his background in the philosophy of language, Berlin argued for a nuanced and subtle understanding of our political terminology, where what was superficially understood as a single concept could mask a plurality of different uses and therefore meanings. Berlin argued that these multiple and differing concepts, otherwise masked by rhetorical conflations, showed the plurality and incompatibility of human values, and the need for us to distinguish and trade off analytically between, rather than conflate them, if we are to avoid disguising underlying value-conflicts. The two concepts are 'negative freedom', or freedom from interference, which Berlin derived from the British tradition, and 'positive freedom', or freedom as self-mastery, which asks not what we are free from, but what we are free to do. Berlin points out that these two different conceptions of liberty can clash with each other.

Berlin's writings on the Enlightenment and its critics (especially Giambattista Vico, Johann Gottfried Herder, Joseph de Maistre and Johann Georg Hamann, to whose views Berlin referred as the Counter-Enlightenment) contributed to his advocacy of an irreducibly pluralist ethical ontology.[14] In Three Critics of the Enlightenment, Berlin argues that Hamann was one of the first thinkers to conceive of human cognition as language – the articulation and use of symbols. Berlin saw Hamann as having recognised as the rationalist's Cartesian fallacy the notion that there are "clear and distinct" ideas "which can be contemplated by a kind of inner eye", without the use of language – a recognition greatly sharpened in the 20th century by Wittgenstein's private language argument.[15]

For Berlin, values are creations of mankind, rather than products of nature waiting to be discovered. He argued, on the basis of the epistemic and empathetic access we have to other cultures across history, that the nature of mankind is such that certain values – the importance of individual liberty, for instance – will hold true across cultures, and this is what he meant by objective pluralism. Berlin's argument was partly grounded in Wittgenstein's later theory of language, which argued that inter-translatability was supervenient on a similarity in forms of life, with the inverse implication that our epistemic access to other cultures entails an ontologically contiguous value-structure. With his account of value pluralism, he proposed the view that moral values may be equally, or rather incommensurably, valid and yet incompatible, and may therefore come into conflict with one another in a way that admits of no resolution without reference to particular contexts of decision. When values clash, it may not be that one is more important than the other: keeping a promise may conflict with the pursuit of truth; liberty may clash with social justice. Moral conflicts are "an intrinsic, irremovable element in human life". "These collisions of values are of the essence of what they are and what we are."[16] For Berlin, this clashing of incommensurate values within, no less than between, individuals, constitutes the tragedy of human life. Alan Brown suggests, however, that Berlin ignores the fact that values are commensurable in the extent to which they contribute to the human good.[17]

"The Hedgehog and the Fox"

Main article: The Hedgehog and the Fox

"The Hedgehog and the Fox", a title referring to a fragment of the ancient Greek poet Archilochus, was one of Berlin's most popular essays with the general public, reprinted in numerous editions. Of the essay, Berlin once said "I never meant it very seriously. I meant it as a kind of enjoyable intellectual game, but it was taken seriously."[18]

Berlin's essay "Historical Inevitability" (1954) focused on a controversy in the philosophy of history. Given the choice, whether one believes that "the lives of entire peoples and societies have been decisively influenced by exceptional individuals" or, conversely, that whatever happens occurs as a result of impersonal forces oblivious to human intentions, Berlin rejected both options and the choice itself as nonsensical. Berlin is also well known for his writings on Russian intellectual history, most of which are collected in Russian Thinkers (1978; 2nd ed. 2008) and edited, as most of Berlin's work, by Henry Hardy (in the case of this volume, jointly with Aileen Kelly). Berlin also contributed a number of essays on leading intellectuals and political figures of his time, including Winston Churchill, Franklin Delano Roosevelt, and Chaim Weizmann. Eighteen of these character sketches were published together as "Personal Impressions" (1980; 2nd ed., with four additional essays, 1998; 3rd ed., with a further ten essays, 2014).[19]

Apart from earlier editions of Karl Marx and The Hedgehog and the Fox, and Unfinished Dialogue, all publications listed from 1978 onwards are edited by Henry Hardy, and all but Karl Marx are compilations or transcripts of lectures, essays, and letters. Details given are of first and latest UK editions. Most titles are also available as e-books. The 11 titles marked with a '+' are available in the US market in revised editions from Princeton University Press, with additional material by Berlin, and (except in the case of Karl Marx) new forewords by contemporary authors; the new edition of Karl Marx is also available in the UK.