The son of a well-known rabbi and Talmudist, Kirzner was born in London, England and came to the United States via South Africa. 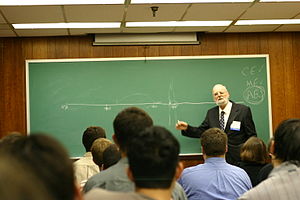 Lecture for the Foundation for Economic Education on July 28, 2006

Kirzner is emeritus professor of economics at New York University and a leading authority on Ludwig von Mises's thinking and methodology in economics. Kirzner's research on entrepreneurship economics is also widely recognized.[2] His book, Competition and Entrepreneurship criticizes neoclassical theory for its preoccupation with the model of perfect competition, which neglects the important role of the entrepreneur in economic life. Kirzner's work integrating entrepreneurial action into neoclassical economics has been more widely accepted than much other Austrian writing of the late twentieth century.[citation needed] Kirzner's major work is in the economics of knowledge and entrepreneurship and the ethics of markets. Kirzner has said that he agrees with Roger Garrison's statement that Kirzner's work takes the middle ground, as opposed to the recent, more extreme position of some Austrian School economists who deny the relevance of market equilibrium.[1] In 2006, Kirzner received the Global Award for Entrepreneurship Research[3] " for developing the economic theory emphasizing the importance of the entrepreneur for economic growth and the functioning of the capitalist process.".[4] Universidad Francisco Marroquín granted him an Honorary Doctorate Degree for his contributions to economic theory.Honorary Doctoral Degrees at Universidad Francisco Marroquín UFM also named its Kirzner Entrepreneurship Center in his honor.[5][6]

Some of his works on economics include:

Liberty Fund is currently publishing Israel Kizner's Collected Works in ten volumes under the supervision of Peter Boettke and Frederic Sautet. The first volume, The Economic Point of View, came out in December 2009, the second volume, Market Theory and the Price System, in May 2011 and the third volume, Essays on Capital, in June 2012. The fourth volume, Competition and Entrepreneurship, is scheduled to come out in 2013, which will also be the year of the 40th anniversary of the publication of the book.

Kirzner is also an ordained rabbi and Talmudic scholar, and serves as the rabbi of the congregation once headed by his father in Brooklyn, New York. He is one of the most famous disciples of Rabbi Isaac Hutner, the late dean of the Yeshiva Rabbi Chaim Berlin, where he studied for many years during the same years he obtained his academic training. Kirzner is an authority on Hutner's writings and is one of the few official editors of all sources that Hutner quotes.