James Gibbons (23 July 1834 – 24 March 1921) was an American Cardinal of the Roman Catholic Church. He served as Bishop of Richmond from 1872 to 1877, and as ninth Archbishop of Baltimore from 1877 until his death in 1921. Gibbons was elevated to the cardinalate in 1886, the second American to receive that distinction, after John McCloskey.

The fourth of six children, James Gibbons was born in Baltimore, Maryland, to Thomas and Bridget (née Walsh) Gibbons. His parents were from Tourmackeady, County Mayo, Ireland, and settled in the United States after moving to Canada. After falling ill with tuberculosis in 1839, his father moved the family to his native Ireland, where he believed the air would benefit him. There, Thomas operated a grocery store in Ballinrobe and young James received his early education. His father died in 1847, and his mother returned the family to the United States in 1853, settling in New Orleans, Louisiana.[1] 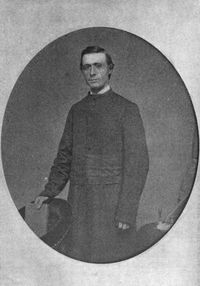 Gibbons decided to pursue Holy Orders after attending a sermon given by Paulist co-founder, Clarence Walworth. In 1855, he entered St. Charles College in Ellicott City. After graduating from St. Charles, he entered St. Mary's Seminary in Baltimore in 1857. He suffered a severe attack of malaria during his time at St. Mary's, leaving his state of health so poor that his superiors almost considered him unsuitable for ordination. Slight of build and a little less than average height, from the early days of his priesthood, he suffered from a sensitive stomach and consequent periods of nervous exhaustion. On June 30, 1861, Gibbons was ordained to the priesthood by Archbishop Francis Kenrick of Baltimore.[1]

He then served as a curate at St. Patrick's Church in Fells Point for six weeks before becoming the first pastor of St. Brigid's Church[2] in Canton. In addition to his duties at St. Brigid's, he assumed charge of St. Lawrence Church (now called Our Lady of Good Counsel Church) in Locust Point and was a chaplain for Fort McHenry in the Civil War.[1]

In 1865, Gibbons was made private secretary to Archbishop Martin John Spalding. He helped prepare for the Second Plenary Council of Baltimore in October 1866. At Spalding's prompting, the Council fathers recommended both the creation of an apostolic vicariate for North Carolina and the nomination of Gibbons to head it.[3] 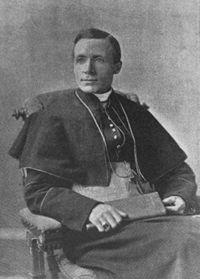 On March 3, 1868, Gibbons was appointed Apostolic Vicar of North Carolina and Titular Bishop of Adramyttium by Pope Pius IX. He received his episcopal consecration on the following August 15 from Archbishop Spalding, with Bishops Patrick Neeson Lynch and Michael Domenec, CM, serving as co-consecrators. At age 34, he was one of the youngest Catholic bishops in the world and was known as "the boy bishop."

His vicariate, the entire state of North Carolina, had fewer than seven hundred Catholics. In his first four weeks alone in North Carolina, Gibbons traveled almost a thousand miles, visiting towns and mission stations and administering the sacraments. He also befriended many Protestants, who greatly outnumbered Catholics in the state, and preached at their churches. Gibbons made a number of converts, but finding the apologetical works available inadequate for their needs, he determined to write his own; Faith of Our Fathers would prove the most popular apologetical work written by an American Catholic.[3]

Gibbons became a popular American religious figure, gathering crowds for his sermons on diverse topics that could apply to Christianity as a whole. He was an acquaintance of every president from Andrew Johnson to Warren G. Harding and an adviser to several of them.

From 1869 to 1870 Gibbons attended the First Vatican Council in Rome. Aged 35 years and 4 months when the Council opened, he was the youngest American bishop present by a mere six days (which he conceded to Jeremiah Francis Shanahan, Bishop of Harrisburg) and the second youngest in all (Basilio Nasser, Melkite Bishop of Baalbek, Lebanon, was more than five years his junior, aged just 30 years and 3 months at opening). Gibbons voted in favor of the doctrine of papal infallibility. He assumed the additional duties of Apostolic Administrator for the Diocese of Richmond, Virginia, in January 1872.

Gibbons was later named the fourth Bishop of Richmond on July 30, 1872. He was installed as Bishop on October 20, and served there until May 1877, when he was named Coadjutor Archbishop of Baltimore. He succeeded as Archbishop that October on the death of Archbishop James Roosevelt Bayley.[3] For the first twenty years of his administration, he had no auxiliary bishop, and thus through the repeated confirmation tours to all parts of his jurisdiction, he came to know the priests and people very well. 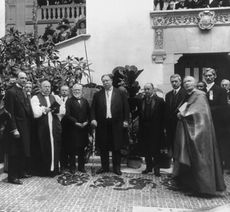 In 1886 Gibbons was created a Cardinal-Priest of Santa Maria in Trastevere, becoming the second American, after John McCloskey, to attain that rank in the Catholic Church. Gibbons advocated the creation of The Catholic University of America and served as its first Chancellor upon its creation in 1887. He was the first American cardinal to participate in a papal conclave, in 1903. He would have participated in the 1914 conclave but he arrived late.[4]

In 1899 Pope Leo XIII sent Gibbons an encyclical, known by its first words in Latin Testem Benevolentiae Nostrae ("Concerning New Opinions, Virtue, Nature and Grace, with Regard to Americanism"), condemning what was termed "Americanism".[5] This was prompted by the preface of the French translation of the Life of Isaac Hecker,[6] wherein the translator attributed certain opinions to the late Father Isaac Hecker. Members of the hierarchy in the United States assured the Pope that the opinions expressed were not those of Father Hecker, who had never countenanced any deviation form, or minimizing of, Catholic doctrines.

During World War I Cardinal Gibbons was instrumental in the establishment of the National Catholic War Council, and afterwards supported the League of Nations. Although initially opposed to women's suffrage, when the nineteenth amendment passed Gibbons urged women to exercise their right to vote "...not only as a right but as a strict social duty."[4] 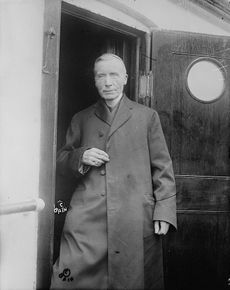 Gibbons advocated for the protection of labor, an issue of particular concern because of the many Catholics who were being exploited by the industrial expansion of America's urban East coast at the turn of the century. He was once quoted as saying, "It is the right of laboring classes to protect themselves, and the duty of the whole people to find a remedy against avarice, oppression, and corruption." Gibbons had a key role in the granting of Papal permission for Catholics to join labor unions.

Gibbons successfully defended the Knights of Labor (a union which had a significant Catholic membership) from papal censure, thereby winning a reputation as labor's friend, though in fact he deplored class consciousness and condemned industrial violence. 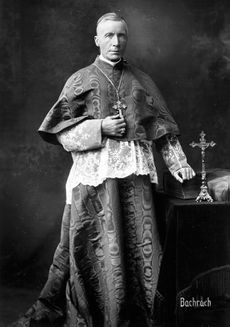 In the autumn of 1904 the Congo Reform Association idelegated its secretary, Edmund D. Morel, to carry its case before the thirteenth International Peace Congress scheduled for the first week in October in Boston. Not invited to send a representative to present the king's side of the case at the Peace Congress, the Belgian government of Leopold II asked Gibbons to support its demand that the question be kept off the agenda. The cardinal agreed to lend his assistance by writing a letter to the Reverend Edward Everett Hale, one of the leading officials of the Congress, who read it at one of the sessions. Gibbons cited the recognition given to the regime at the Berlin conference twenty years before, quoted the Italian and British delegates to that conference in admiration of the king's policies, and attributed the present prosperity of the region to Belgian toil and sacrifice. He added that it would likewise be unfair since no representative of the Belgian government had been invited to present the king's case.

Gibbons did not escape criticism for his intervention in the case. Morel reproached him for not knowing the facts, and in December, 1906, the Reverend H. Gratton Guinness publicly attacked Gibbons in a Presbyterian church in Baltimore. The cardinal stated that he had been informed by Catholic missionaries on the scene that the stories of abuse were greatly exaggerated. "I fear," said the cardinal, "that this agitation against King Leopold's administration is animated partly by religious jealousy and partly by commercial rivalry." Gibbons disclaimed any personal interest in the affair, and in reiterating his motive as that of wishing to defend a small nation in the interest of fair play, he concluded by saying: "I would willingly make the same defence in behalf of Holland, Sweden, Denmark, or any of the weaker Powers if circumstances demanded."

As Gibbons suggested, religious jealousy and commercial rivalry had played their part in the movement for reform. But the evidence still weighed heavily against the government of the Belgian king as having been guilty of serious exploitation of the natives and, at times, of inhuman treatment of the population. The cardinal's apparently complete reliance on the word of the king's government and on the reports that reached him periodically from missionaries betrayed him into a position difficult to defend.[4]

According to historian John Tracy Ellis, "Gibbons erred in becoming involved. For one of the few times in Gibbons' long life, his normally keen judgment went astray and exposed him to the charge of partisanship and of ignorance of the facts governing an issue. The cardinal should have steered clear of the case."[4]

The dogma of papal infallibility is restricted to a pope defining a doctrine concerning faith or morals. The limitation on the pope's infallibility "on other matters" is frequently illustrated by Cardinal James Gibbons's recounting how the pope mistakenly called him "Jibbons".[7][8][9][10][11]

Part of Gibbons' popularity derived from the works he authored. The Faith of Our Fathers (1876) remains the most enduringly popular. Also widely read were Our Christian Heritage (1889), The Ambassador of Christ (1896), Discourses and Sermons (1908), and A Retrospect of Fifty Years (1916). He contributed a number of essays to much-read journals such as the North American Review and Putnams' Monthly. His style was simple but compelling. Protestant Americans looked often to Gibbons for an explanation of the Catholic position on contentious issues.

In 1876 Gibbons published The Faith of Our Fathers: A Plain Exposition and Vindication of the Church Founded by Our Lord Jesus Christ [1].

In 1899, Gibbons granted the Imprimatur for the Challoner edition of the Douay-Rheims Bible. 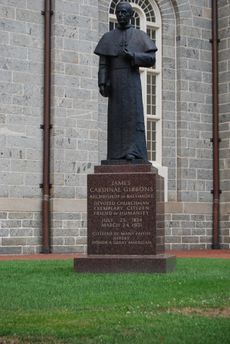 Cardinal Gibbons statue outside of the Baltimore Basilica

President William Taft honored Gibbons for his contributions at his 1911 golden jubilee celebration. In 1917, President Theodore Roosevelt hailed Gibbons as the most venerated, respected, and useful citizen in America.

In his later years he was seen as the public face of Roman Catholicism in the United States, and on his death was widely mourned. He is famous for his support of the labor movement in the United States, and for the numerous schools named after him. Mencken, who reserved his harshest criticism for Christian ministers, wrote, in 1921 after the Gibbons' death, "More presidents than one sought the counsel of Cardinal Gibbons: he was a man of the highest sagacity, a politician in the best sense, and there is no record that he ever led the Church into a bog or up a blind alley. He had Rome against him often, but he always won in the end, for he was always right."

The following schools were named after him: