James Murray (21 January 1721, Ballencrieff, East Lothian, Scotland – 18 June 1794, Battle, East Sussex) FRS was a British soldier, whose lengthy career included service as colonial administrator and governor of the Province of Quebec and later as Governor of Minorca from 1778 to 1782. His term in Quebec was notably successful, and marked with excellent relationships with the conquered French-Canadians. who were reassured of their traditional rights and customs.[1]

He was a younger son of Alexander Murray, 4th Lord Elibank, and his wife Elizabeth(Betty) Stirling. His brother was Alexander Murray who served in Nova Scotia. Educated in Haddington and Selkirk, he began his military career in 1736 in the 3rd Scots Regiment in Dutch service. In 1740 he served as a second lieutenant in Wynyard’s Marines, under his brother Patrick Murray, 5th Lord Elibank, in the unsuccessful attack on Cartagena. He returned as a captain in 1742. He served as Captain of the grenadier company of the 15th Regiment of Foot during the War of the Austrian Succession, being severely wounded during the Siege of Ostend in 1745, and distinguishing himself in the Raid on Lorient in 1746. In December 1748, he married Cordelia Collier, of Hastings.

James Murray purchased his majority in the 15th Regiment of Foot in 1749, and the lieutenant-colonelcy in 1751. He commanded his regiment in the Raid on Rochefort, 1757, defending Sir John Mordaunt in his subsequent court-martial. He commanded a battalion in the 1758 Siege of Louisbourg along with his brother Alexander.

When Louisbourg was taken, Murray accompanied General Wolfe on a raiding expedition northwards in the Gulf of St. Lawrence Campaign (1758). While Wolfe destroyed French settlements along the Gaspe Peninsula, Murray harried the French fishing settlements along Miramichi Bay. Part of the destruction included the homes and church at St. Anne's, now called Burnt Church.

Murray served under General James Wolfe at the Battle of the Plains of Abraham in 1759. Murray believed Wolfe's plan to land the army at Anse au Foulon was foolish and absurd, and succeeded "only by Providence".[2] He was the military commander of Quebec City after it fell to the British. Lévis managed to defeat Murray and the British in the Battle of Sainte-Foy in 1760, but he had to abandon the siege of Quebec due to a lack of supplies and the arrival of a British relief fleet.

He encouraged his favourite nephew Patrick Ferguson to follow him in a military career. Patrick was the son of Murray's sister Anne who was married to Lord Pitfour.[3] He also assisted another nephew, Patrick Murray, illegitimate son of his brother, George.

On 5 September 1760, Murray signed a Treaty of Peace and Friendship with the Huron Nation, then residing at Lorette, near Quebec City. In 1990, that treaty was found by the Supreme Court of Canada to still be valid and binding on the Crown.[4]

In October 1760, he became military governor of the district of Quebec and became the first civil governor of the Province of Quebec on 4 October 1763.[5] He was promoted Major-General on 26 March 1765.[6] As governor he was sympathetic to the French-Canadians, favouring them over British merchants who came to settle in the wake of the conquest. He allowed the continuance of French civil law because at the time the French outnumbered the British 25:1 and he needed to be careful not to incite discontent or rebellion. The dissatisfaction of British settlers led to his recall in 1766 (although he remained governor in name until 1768), but his precedents were preserved in the Quebec Act of 1774. Murray successfully argued for the Quebec Act to continue slavery in Quebec as it had existed under the French;[citation needed] an advertisement appeared in the Quebec Gazette in 1769 for a "negro woman, aged 25 years, with a mulatto male child... formerly the property of General Murray".[7]

Murray was lieutenant-governor and then governor of Minorca from 1774 to 1782. In 1780, he married, as his second wife, Ann Witham, daughter of the Consul-General there. During the American War of Independence, he defended Fort St. Philip, at Port Mahon, against a Franco-Spanish siege for seven months (1781–82), until forced to surrender. He was known as ‘Old Minorca’ Murray as a result.

He then returned to his home, Beauport Park, in Hollington, Sussex, where he died. Further honours came to him in his last years: he was appointed General, and Governor of Kingston-upon-Hull in 1783, and Colonel of the 21st Regiment in 1789.

His first marriage had been childless, but by his second, he had six children (two of whom died in infancy): 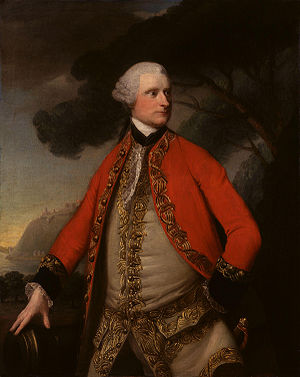 Murray appears in the 2004 film Nouvelle-France in his role as Governor of the new-captured Quebec. He is portrayed by Michael Maloney.